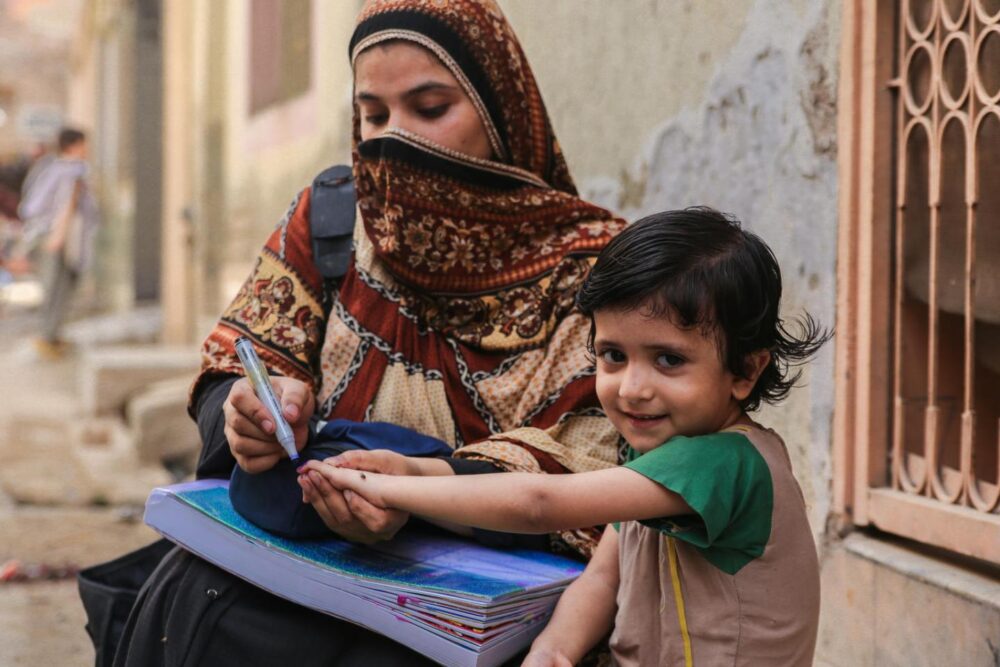 Pakistan’s Fight Against Polio Continues, Two Drops At A Time:

Pakistan’s Fight Against Polio Continues, Two Drops At A Time

Sabiha and Mohammad Nadeem are at their local vaccination center at dawn. They work with Sadia and Haji sahib to manage polio drives and routine vaccinations in Hijrat Colony, a densely-populated neighborhood in Karachi’s District South. Most days, the team of four wanders in the area after dark. Speaking to the elders and explaining why two drops of the polio vaccine can keep their young ones safe.

Their toughest area is the slum of Hijrat Colony, a high-risk neighborhood. According to Sabiha, a UC Polio Officer, the slum is difficult to navigate because of the people — you never know how they will react. This, she explains, is because there is frequent migration in the area.

“You’ll see a house locked up for two years, then randomly a new family will have settled inside and they’ll have four kids with them. People return to their villages when it gets too hot here or come when it is too cold there — we call these kids not available and try to vaccinate them when they return. We keep a check,” she explained.

We cover posh areas and the slum. In richer areas people vaccinate children at hospitals.

Last week, I joined them on a polio drive — the third sub-national immunization campaign of the year that aimed to vaccinate more than 13 million children across the country. Pakistan is one of only two remaining polio-endemic countries in the world along with Afghanistan.

This year, 20 children have been paralyzed by the virus in the country all of them belong to the Southern districts of Khyber Pakhtunkhuwa.  Of the 20, 17 were from North Waziristan, two from Lakki Marwat and one from South Waziristan.

In Karachi’s Hijrat Colony, the team’s goal for this drive was to visit over 70,000 houses and vaccinate more than 9,900 children under five years of age. So far (on day 4 of the drive), Sabiha, said they had not faced any issues.

Despite bringing down refusals from 600 in 2018, to 10 in 2022, Nadeem, who is the Union Council Operations Officer, said that they would have to engage with the community to ensure that they get to every child in the area.

“The reason we are a high-risk area is because of the almost daily migration aka Hijrat in the neighbourhood — this area is 70 per cent Pakhtun and the remaining comprises Hazara, Sindhi and members of religious minorities. This migration is what makes us high-risk because the people who are moving into the area are from rural Sindh or Khyber Pakhtunkhwa. These are the places where there are reported cases.

He shared that last September, an environmental sample was found in the Malir Nala — a small stream that flows through the neighborhood — but the local team took timely action and within weeks, subsequent samples from the streams had turned negative. The action entails initiating a vaccine drive on an emergency basis and ensuring that all the houses in the area are covered.

“We have mobilised people in the community and work with the communications team as well to change the minds of those who refuse the drops,” he added.

Sabiha shared that she had gone into the community to work with families and gained their trust. “During the Covid-19 lockdown, people used to come to us to get their children vaccinated. They are now aware. Initially, there was no acceptance of what we did — people had their misconceptions, they thought it was haram or would cause fertility issues in children or was a way to control the population … it took time to overcome these barriers and I think we have managed to overcome these hurdles,” she said.

“It is important to break these myths. I remember when the video from Peshawar went viral, we had so many refusals. It felt like we were starting from scratch again but we kept doing it and eventually, people realised that the drops would help their children, not harm them,” she added.

The video she referred to was shot and shared on social media by a resident of Peshawar’s Mashokhel area, Nazar Muhammad, and showed children from a school admitted to the Hayatabad Medical Complex with complaints of illness following administration of the anti-polio vaccine.

In the video, which was later proved to be fake, Nazar alleged that administration of the vaccine had caused the children to fall unconscious. Then he turned to a group of children standing next to him and orders them to “fall asleep”. They then lay down on the hospital bed behind them as if they were unconscious.

Earlier this month, a delegation of the Polio Oversight Board, including the chair, Dr Chris Elias from the Bill and Melinda Gates Foundation, WHO Regional Director Dr Ahmed Al-Mandhari and the UNICEF Global Director for Polio, Steven Lauwerier, together with senior leaders from the National Emergency Operations Centre and Rotary International visited Malir during the polio campaign to observe the response to the virus detected in Landhi back in August. Before this, 17 months had gone by without an environmental sample testing positive. The district responded quickly and due to this, two negative samples followed.

Talking about Pakistan’s progress in the fight against polio at the EOC, Dr Elias said that the Global Polio Eradication Initiative recently launched a new strategy for the endgame of polio eradication. “We had an important event in Berlin last month to mobilize the resources for that strategy and I think we are making good progress. For the last five or six years, the only countries with the endemic transmission of the wild poliovirus are Pakistan and Afghanistan but even there, we have seen substantial progress — there were only five cases in 2021, there have been 20 cases in 2022 but they are all very concentrated in areas we knew were vulnerable,” he said.

“Had these 20 cases shown up in places we didn’t know were vulnerable, we’d be surprised but the cases are exactly where we knew we were missing children due to security issues, lack of access, high levels of refusal and such,” he added.

According to Dr Elias, the program has generally made good progress. “If you look at it, there is only one genetic cluster transmitting in Pakistan, whereas there were 11 in 2020, four in 2021 and we are now down to one. I think we are on track but we need to stay vigilant.”

For Dr Elias, 2023 is going to be critical. “Actually the next six months are going to be quite critical because we are entering the traditional low transmission season so now is the time to pull the knock out punches. I think we are on track for a successful polio eradication program in Pakistan”.

Dr Mandhari, who is visiting Pakistan for the fifth time, said that he had seen a strong improvement every time when it comes to the country’s commitment to eradicating polio.

“The challenges are out there — one of these challenges is community mobility as they keep moving from one place to another. When it comes to the community level, it is imperative for us to maintain trust and thus commitment with families,” he said.

“The role of the country is very important. The people of Pakistan know that it is not just polio but other basic services that the government needs to provide. The Polio Oversight Board is working very hard to mobilise resources so that people in areas most deprived of health services and far away communities are provided with essential healthcare services,” he added.

Talking about their visit to Malir, Dr Mandhari said that they visited a dispensary where immunisation and vaccinations services are available. He said that it was doing so well that residents were bringing their children to the dispensary regularly. “This is why there needs to be trust between the teams, community members and parents …trust and interest to make our task easy.”

Aziz Memon of Rotary International shared that for his organisation, it had been a long journey which started with a small campaign. “We hope to finish the job, we will not give up till polio is eradicated from Pakistan and the world,” he said.

Dr Shahzad Baig, who is the national coordinator for the polio programme, shared that they had taken some steps to ensure maximum coverage. “Mistrust is a big challenge. We have learned that what works in 90pc of the country, does not work in KP or at the Afghan border. You need social change for vaccination acceptance,” he said, adding that this includes improving the quality of the campaign in DI Khan and Bannu, bringing in more resources, overcoming security challenges, focusing on zero dose children and involving the Jirga/community influencers.

For Lauwerier, polio eradication isn’t just important for Pakistan, but for the whole world. “If we don’t get it under control, it will spread to other parts of Pakistan … and other parts of the world, something we have already seen with cases in Africa so it is important that focus is there, and that there is no complacency.

“These last districts will probably be difficult because we are talking about profound community engagement, convincing people who have been refusing the vaccine … but it is not new for us, working in these complex environments — we did it in Nigeria,” he said.

“Unfortunately, the virus is very clever and it finds the weakness that we haven’t seen or take into account so I think this is an exciting moment but a moment where we have to be alert every single minute,” he added.

According to Lauwerier, community ownership is the key to eradicate polio. “There has to be trust between the community, the programme and the parents … if the trust is not there, we need to analyse it. There are different ways to deal with it. We need to see what kind of misinformation is there and how to deal with it for example, we don’t tell them what to do, but have a discussion about it and that is what building trust is about,” he explained.

For now, the stakeholders are hopeful that their efforts will bear fruit and that soon, not just Pakistan, but it, the entire world will be rid of polio. But that depends on the people of Pakistan — how receptive they are to the two drops of the vaccine for their children.

For Nadeem in Hijrat Colony, this means they keep engaging with the community and ensure they reach every child until the job is done. “We need to ensure that no child is missed. Our children have not tested positive for the crippling poliovirus since 2011 and we’d like to maintain that. We need to make people realize that the polio virus is dangerous and we need to eradicate it. Need to vaccinate every child under five,” he said.

Courtesy: The article is originally published in The Dawn newspaper’s Prism feature written by Tooba Masood.

In this article:Health, Pakistan’s Fight Against Polio Continues