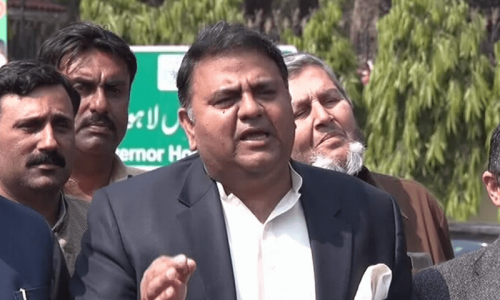 LAHORE: The PTI reiterates its forewarning that it will move the court as well as go to streets if the election watchdog did not choose care-taker CM Punjab on merit. The party accused PDM alliance of exerting its clout to get its nominees elected as Punjab’s caretaker chief minister.

Dawn new reports PTI leader Fawad Chaudhry saying that “The PTI believes that PDM has “something else” in mind than holding the ele­c­tions within the constitutionally requi­red period of 90 days in the province.” He termed the PDM nominations for the post of caretaker chief minister as a step in that direction.

While referring to PDM’s names, Mr Chaudhry said, “We are not going to allow the appointment of any of the ‘two controversial’ nominees. If ECP picks one of them we will challenge this in court and take to the streets against such appointment.”

Following a meeting with Imran Khan, Mr Zafar hoped that ECP would prudently scrutinize qualifications of all the nominees. He said PTI’s parliamentary committee had ‘objected’ to Mr Naqvi’s nomination.

While PDM alliance cite eligibility issues regarding the PTI-Q alliance nominees, with one being a dual national and the other having served as member FPSC. The nominees of the federal coalition are disputed by the PTI members, for one facing corruption cases and the other nominee being close to PPP leader Asif Zardari.

The ECP has to decide the matter after Mr Elahi and Opposition Leader Hamza Shehbaz and a parliamentary committee of Punjab Assembly failed to build a consensus on a candidate.

Anticipating Mr Naqvi’s selection PTI leader Farrukh Habib tweeted “The ECP will lose its credibility altogether if it picks him for the slot.”

Another party insider shared that “The PML-N-led federal coalition has chosen two of its loyalists for the caretaker chief minister. It wants appointment of one of them by the ECP since it failed the episode of Mr Elahi’s vote of confidence”.