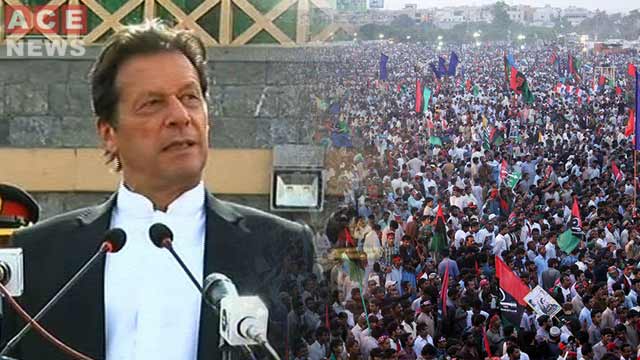 PTI bagged 26 seats of the AJK assembly, garnered around 613,590 votes, which comes to around 31.35 percent of the votes polled; While PML-N won 6 seats, secured around 491,000 votes, that is, about 26 percent of the votes cast. (Pakistan People’s Party won 11 seats with its 350,000 votes, which comes to about 18 percent of the total votes cast.) Where do these figures lead us? Does it mean, according to the Fawad formula, around 500,000 voters of the PML-N supported the anti-security forces narrative of Nawaz Sharif? If Fawad is right, it’s scary.

AJK is still AJK, let’s have a look at the by-polls in Pakistan. Every single by-election in Punjab has been won by PML-N. Can this be interpreted as the triumph of Nawaz Sharif’s ‘anti-security forces’ narrative? Going by the Fawad formula, the country is faced with the gravest crisis of its existence. Mr Federal minister may throw some light on this.

Dilating upon his statement, the minister information said that off-late Mr Sharif fully came out of the closet against the security forces; and his recent contacts with the anti-Pakistan elements like Afghan national security advisor Muhib Hamdullah also proved an eye-opener for the AJK voters. The question still remains: did 500,000 Kashmiris vote for Sharif’s anti-security forces agenda?

In fact, Nawaz Sharif before leaving London for Pakistan in 2018, named the chief of a premium Pakistani intelligence outfit as someone violating his oath and meddling in politics. Even much before that, he had coined the famous phrase of our political lexicon – khalai makhlooq. Last year, he was named the chief in a Gujranwala jalsa and later his party won the Gujranwala and Daska elections. Likewise, Nawaz was dubbed ‘Modi ka Yar’ after Indian PM’s 2015 Raiwind visit; and the Nawaz-Jandal meeting was also bandied about before the 2018 polls. Interestingly, in the 2018 elections, Nawaz bagged more seats in Punjab than PTI. What were people voting for in 2018, or for that matter, even today? Does voting for Nawaz Sharif mean voting against the security forces of Pakistan? It is a dangerous line of argument that, when analyzed deeply, leads to frightening conclusions.

It is pertinent here to look at the PML-N vote bank. It is the petty bourgeoisie and the small businessman that form the backbone of the PML-N vote bank. There are many other social and economic groups that support the party for different reasons, including the development work that these groups credit PML-N with, especially in Punjab under Shehbaz Sharif. No denying the fact that some groups, particularly in urban areas, that describe themselves as democrats, liberals, and constitutionalists, also support PML-N. But declaring them ‘anti-security forces’ will be a little too much as they sincerely believe that rigged elections do not solve any of our problems but only multiply them. Or they believe that following the constitution can lead us to safe shores. Supporting the constitution does not mean being anti-security forces. This is misleading to propagate that by criticizing the martial laws or tinkering with the election process makes a group anti-security force.

Besides, the voters in Pakistan, particularly in rural areas, primarily vote for the biradri, clan, and cast. It is mindless, for example, to describe over 111,000 voters voting for Nausheen Iftikhar in NA 75 Daska last April, as anti-security forces. Spin doctors are supposed to give interpretations to events that benefit their bosses; but not at the cost of dividing the society on such deceptive fault lines.

Either we have to believe Nawaz Sharif in this regard who says that his criticism of a few uninformed individuals who violate their oath, must not be interpreted- ed as criticism of the entire institution. Or we are left with no choice but to believe that millions and millions of voters are voting for the anti-security forces narrative of Mr Sharif.

I believe the chief spin doctor is wrong here. People voting for PML-N are not anti-security forces. Painting them as such will divide the nation on the most dangerous lines. Lots of damage has already been done – just stop it right here!