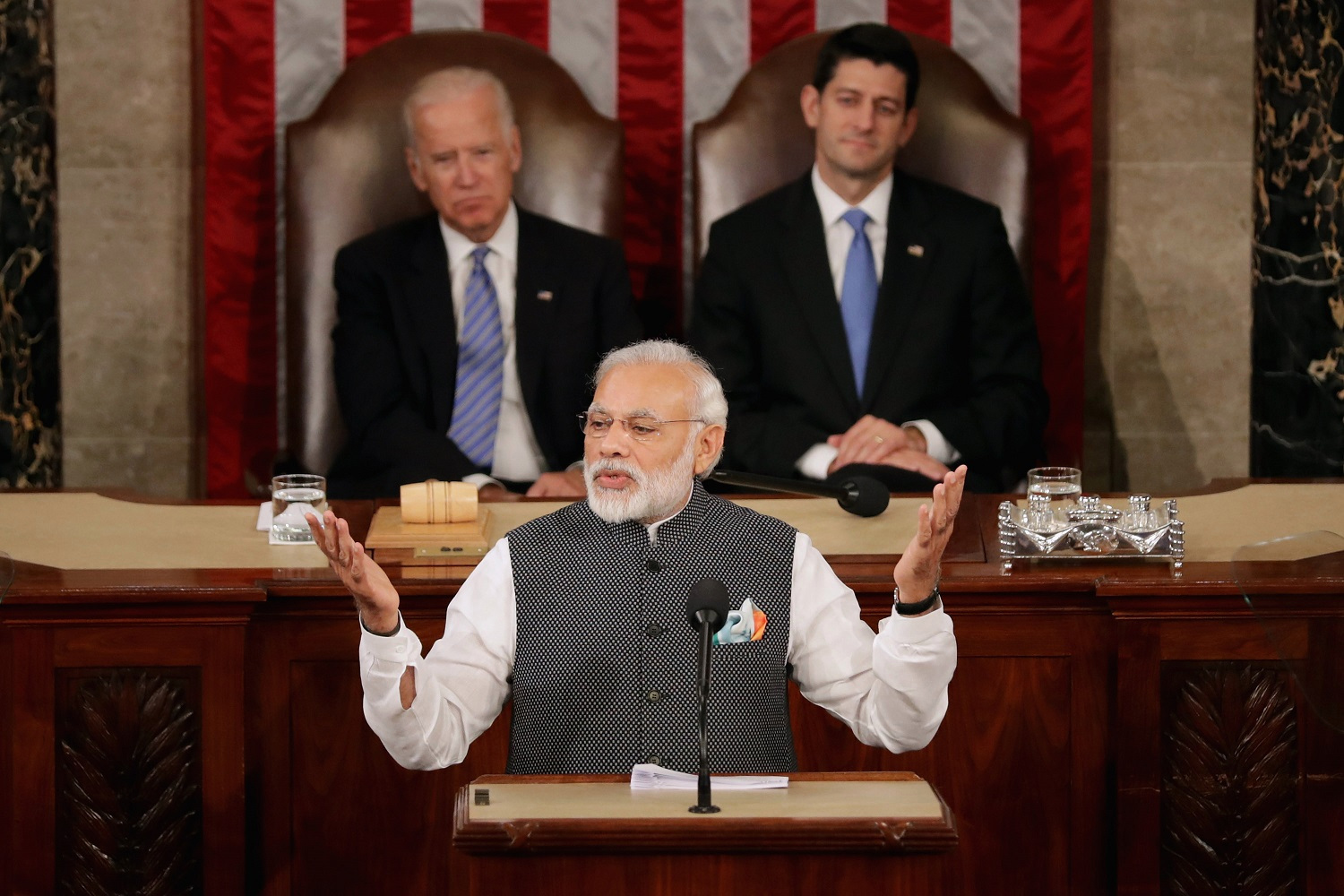 Hopes and expectations of Kashmiris from the new administration in the White House are somewhat justified because in October 2020, Kamala Harris during her election campaign clearly stated that, “We have to remind Kashmiris that they are not alone in the world. There is a need to intervene if the situation demands.”

An Indian-American member of House of Representative Pramila Jayapal, who moved a Congressional resolution on Kashmir, provided a symbolic hope to Kashmiris when she said, “There are people in Washington DC who can raise their voice against repression, oppression, and blatant violation of human rights”.

Her assertion against the Indian atrocities in J&K was so vocal that the visiting Indian External Affairs Minister S Jaishankar refused to meet her which Pramila in her Washington Post article published in Decem- ber 2019 termed as a “great opportunity missed and a sign of weakness for any great democracy to refuse to allow those who have some criticisms to participate in a meeting.”

Amidst hopes and expectations from Biden-Harris administration to play an assertive role to alleviate the plight of the people of Indian occupied Jammu & Kashmir, one must be cognizant of hard realities at the international level, particularly in the United States. America is buried under crises ranging from the pandemic to economic meltdown to racial discord to political polarization. The focus of President Biden is to pull the United States from a very difficult situation and the predicament faced by American society because of the assault on Capitol Hill in January this year.

Domestic challenges and issues in the United States may not permit Biden-Harris adminis- tration to focus on foreign policy issues for a long period of time. And the Kashmir conflict, despite its dangerous and threatening nature is still low on the lists of its priorities. Afghanistan, Middle East, Russia, China and Taiwan are the matters which will shape the list of foreign policy priorities during Demo- cratic Party’s government.

Although recognized by the new adminis- tration in Washington DC as a major issue in South Asia, Jammu & Kashmir will not get the attention of Biden-Harris adminis- tration unless popular uprising along with surge of Indo-Pak tension threaten to destabilize regional peace and security. However, once the thorny issues faced by White House are sorted out, one can expect some focus and attention given to address the complicated and dangerous issue of Jammu & Kashmir.

President Biden’s approach to dealing with difficult foreign policy issues is to seek bipartisan support in the Congress. One can expect the same approach and strategy to be pursued as far as the Kashmir conflict is concerned.

The induction of 20 Indian origin Ameri- cans in the team of Biden-Harris adminis- tration has been seen with some concern particularly in Pakistan but while they have their roots in India, they are now Ameri- cans and pledge their loyalty to the United States. Speculations to the effect that the presence of Indian-Americans in the Biden team will be detrimental to Pakistan is therefore unwarranted.

Indian diaspora in the United States is incomparable with Pakistanis who are settled in that country. They are in powerful positions in the policy-making and research think tanks but it doesn’t mean that the agenda of BJP-Shiv Sena which propagates Hindu nationalism and is anti-Pakistan is subscribed to by the Biden-Harris administration. What matters is the connectivity and influence of Pakistani and Kashmiri diaspora in the United States and their ability to influence the policymaking process particularly the Congress, State Department, Pentagon and the military-industrial complex.

First, the ostensible neutrality of Biden-Har- ris administration in Indo-Pak conflict and their possible effort to promote reconcilia- tion and the resumption of comprehensive dialogue which is non-existent between Islamabad and New Delhi since the last several years. Once the US decides to exert its influence on the two neighbours to resume the process of dialogue, one can expect the thorny issue of Jammu & Kashmir to be discussed by the two sides.

Unlike in the past when Indo-Pak relations had not deteriorated to this level, it will be an uphill task for Washington to help jumpstart the peace process and prevail over the Modi regime to be flexible on Jammu & Kashmir.

Biden-Harris administration will certainly take advantage of the presence of Indian- and Pakistani-origin Americans in its centres of power and can use their potential clout in their countries of origin in order to compel Islamabad and New Delhi follow a prudent approach to dialogue to overcome years of polarization.

How the thuggish Modi regime, which is responsible for worsening the security environment of South Asia by its dangerous overreach in Jammu & Kashmir and subvert- ing the process of regional cooperation in South Asia under SAARC, is dealt by the new American administration is yet to be seen.

Second, in order to draw the attention of the international community including the new American administration, the Kashmiri diaspora need to augment their support for their national liberation move- ment. The more popular demonstrations are held by Kashmiris settled in the UK and the United States, the more they will get attention from international media.

Targeting influential print, broadcast, and online media outlets like The New York Times, Washington Post, Los Angeles Times, Chicago Tribune, CNN and Fox News will certainly make a difference in seeking support from the US members of Congress and policy oriented think tanks located particularly in the US capital. A right kind of strategy is required to give an impetus to the US Kashmir policy under Biden-Harris administration.

A resolution passed by the New York Assembly on 3 February this year to declare 5 February as Kashmir-American Day means a lot to the beleaguered population of Indian occupied J&K. The resolution stated that the “State of New York endeavors to champion human rights including the freedom of religion, movement, and expression of all Kashmiri people, which are embedded within the United States Constitution, through the recognition of diverse cultural, ethnic, and religious identities.”

Sponsored by two Democratic Assemblymen, Nader Sayegy and Nick Perry, the resolution notes, “The Kashmiri community has overcome adversity, shown perseverance, and established themselves as one of the pillars of the New York immigrant community.”

India will definitely negatively react to that recognition but the realities in the Indian occupied J&K particularly since 5 August 2019 are sufficient for self-respecting Americans to side with the suppressed population of that territory.

The influence, clout, and power of a diaspo- ra lobby depend on how good it is at networking and reaching out to the people and institutions that matter.

The pro-Israel lobby in the United States has been able to play a pivotal role in moulding official American policy vis-a-vis Israel despite its occupation of Arab territo- ries, moving the capital from Tel Aviv to Jerusalem and establishing scores of Jewish settlements despite the fact that it violates the UN Security Council resolutions.

Likewise, the pro-Modi Indian lobby in the United States is following in the footsteps of the pro-Israel lobby and is trying to justify the promulgation of Jammu & Kashmir Reorganization Act of 5 August 2019 and the anti-Muslim Citizenship Amendment Act (CAA) as a right kind of policy and is justifying illegitimate domicile act and other repressive laws while portraying Kashmiri resistance groups as extremists and terrorists.

It is a major challenge for Pakistani and Kashmiri diaspora in the United States to counter the propaganda of the pro-Modi Indian lobby by showing it to be wrong and a major threat to democracy, secularism, and human rights.

Third, if the first 100 days of Biden-Harris administration recognizes Jammu & Kashmir as major flashpoint and conflict threatening regional peace and security and the US Congress takes cognizance of blatant human rights violations by the Indian military, one can be hopeful that fairness and justice may be upheld. It will be a test case for Biden-Harris administra- tion to deal with the case of ethnic cleansing and genocide taking place in Jammu & Kashmir by the Indian occupation.

As India shows its true colours is as a fascist state and the level of tolerance is receding at an alarming pace, the task of Kashmiri nationalists will become easy as far as exposing New Delhi and drawing support for their emancipation is concerned.

“The US presidential election stirred as much excitement in Kashmir as in other parts of the world, partly because a lot of Trump’s political messaging and policy measures pitted him directly against Muslim societies”, says Shakir Mir in an op-ed piece published by the online paper The Wire on 10 November 2020.

“His controversial ‘Muslim ban’, his decision to establish an embassy in Jerusalem and his shrill rhetoric against Muslim immigrants had already made him unpopular among Muslims. However, in the Kashmir Valley, the euphoria over Trump’s defeat was also sparked by the realization that senior US Democrats have publicly called out the Modi government over human rights violations in Jammu & Kashmir”.

The Wire quotes Mudasir Lone, a student from Pulwama, as saying, “A lot of Kashmiris view Biden’s victory positively. Given the past statements of Democrats in the US, there’s optimism that we might see some kind of changes, particularly in the domain of human rights and civil freedoms”.

As relative euphoria in the Indian occupied Jammu & Kashmir emanating from the electoral victory of Joseph Biden on 3 November 2020 American presidential elections will fizzle out in the days to come, one can expect political realism to surface. Whether the Biden-Harris administration, along with its European allies, be able to exert adequate pressure on the Modi regime to adopt a flexible approach on J&K and ease repressive measures undertaken since 5 August 2019 remains to be seen.