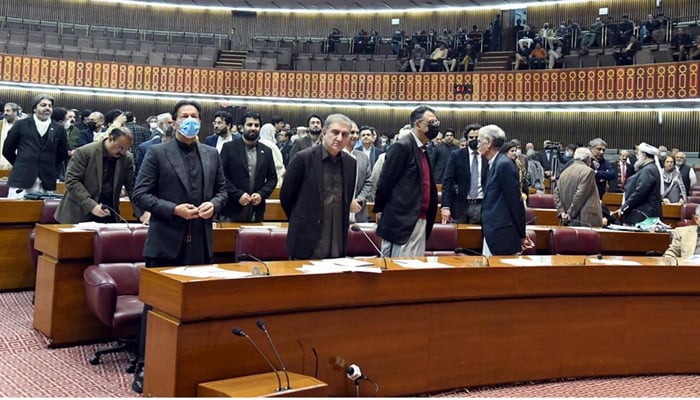 Islamabad: Shah Mahmood Qureshi is declared parliamentary group leader of the PTI in the House by the National Assembly Speaker Secretariat as Imran Khan stood disqualified and stripped of the NA membership. Now Imran Khan cannot enter the House. Sources in the secretariat told on Sunday that Imran Khan had been disqualified by the competent authority from the seat that provided his entry to the House and he became leader of the House/Prime Minister.

In another development, National Assembly Speaker Raja Pervez Ashraf has received a letter from Shah Mahmood Qureshi for an appointment for putting across PTI’s request for acceptance of all resignations and it would be responded in due course after careful consideration. Sources said that in the absence of any provision for accepting en bloc resignations, permission for such action couldn’t be granted in the House.

Speaker Raja Pervez Ashraf had already written to the members, whose resignations were submitted on an identical text. They were asked to appear before the Speaker individually for the verification of their resignation but none of them turned up. The members didn’t even bother to formally reply to the communication. The soundness of the resignations submitted earlier would be discussed by the legal wing of the secretariat. Other issues related to it would also come up for scrutiny this week.

Sources said that the PTI members would be welcomed if they opted to attend the House but in the matter of resignation, they would have to wait for a decision of the speaker and follow the relevant rules. The PTI is still in the process of developing its strategy to get its MNAs resignations accepted. The speaker has authority to accept or reject them after meeting them individually, but he would take a decision in accordance with the Constitution and relevant law.

In the meanwhile, the National Assembly session will commence here tomorrow (Tuesday) evening. Prime Minister Shehbaz Sharif, who didn’t show up in last three sessions of the NA, could come in the house during legislation, sources said. The house will take up legislation on Reko Diq that has already been adopted by the Upper House of the Parliament in line with the demands of the government’s coalition partners, JUIF and BNP-Mengal. The two parties had protested against the earlier legislation on the project and threatened to walk out of the government.

They reached an agreement after lengthy negotiations and amendments to the law was agreed between them. Accordingly, it had been brought in the two houses of the Parliament one after other. Sources hinted that the session would be adjourned sine die after the passage of the amendment. The joint sitting of the two houses of Parliament will also be held tomorrow and it will start two hours ahead of the National Assembly.

Sources said that some important government legislation would be brought before the joint sitting where PTI members from the Senate would also attend. The PTI members of Senate with leader of opposition of the house Dr. Senator Shehzad Waseem would agitate the question of arrest, maltreatment and non-issuance of production orders for Senator Azam Khan Swati in the joint sitting. The PTI Senate members had created rumpus in the previous Senate session on a daily basis that was prorogued last week.

When contacted, Speaker Raja Pervez Ashraf said he wouldn’t accept the resignations of all members, on the insistence of one person, who have tendered their notifications in a similar fashion as he would invite the members individually once it was decided to consider their resignations. “Each and every member turning up in this way would be inquired about their position and circumstances that forced them to quit the house,” he added. Responding to a query about the letter written by Shah Mahmood Qureshi on Sunday evening, he said that he would ask Qureshi about his capacity to plead for the resignations of all fellow members.

Responding to a question about the status of PTI Chairman Imran Khan as MNA, he made it clear that if he tried to enter the house, he would be shown the doors, explaining him that he was an alien and stranger as he stands disqualified as Member of National Assembly. When contacted, Shibli Faraz, chief of staff of Imran Khan, was not available for comments.