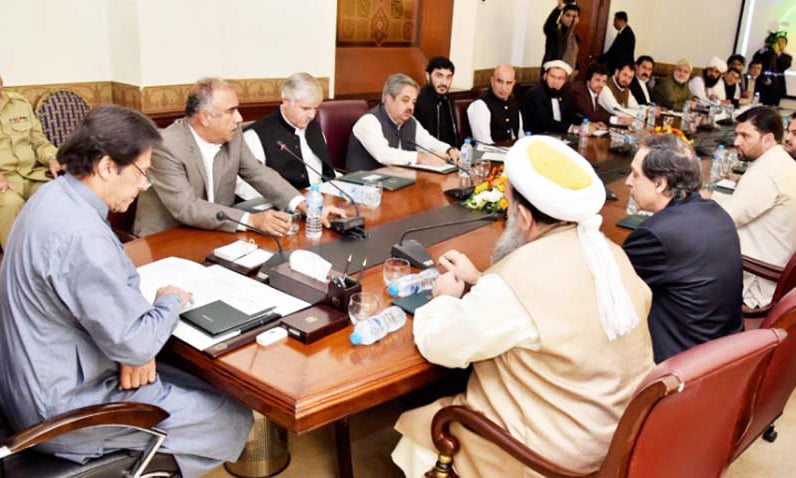 ISLAMABAD: In a significant development, the government and the opposition on Tuesday agreed on the formation of a parliamentary panel on electoral reforms.

The decision was taken at a meeting of parliamentary representatives from treasury and opposition benches with National Assembly Speaker Asad Qaiser at the Parliament House.

The development came amid a raging controversy over the government’s plan to rush through two contentious election-related bills providing for introduction of electronic voting machines (EVMs) and right to vote for overseas Pakistanis possibly through I-voting system. It also came two days before expiry of deadline given by the Election Commission of Pakistan (ECP) to two federal ministers for giving response to notices issued to them for their tirade against the commission, and providing evidence of the serious allegations they had levelled against the chief election commissioner (CEC) and the ECP.

The development indicates that the government has dropped the plan to bulldoze the bills at a joint session of the parliament, but it is not clear if the committee will start work on electoral reforms from scratch or will just take up the two controversial bills.

Meanwhile, PML-N senior leader Shahid Khaqan Abbasi while talking to reporters here called for amending the constitution to provide for trial under treason charge of those who “steal elections and change the will expressed by the electorates through ballot”.

He said no individual or institution had a right to interfere in elections. “Application of Article 6 over such acts should be the first step towards meaningful electoral reforms,” he remarked.

He said that there could be no bigger treachery than stealing elections to defeat the free will of the masses.

Mr Abbasi said a parliamentary committee not having treasury members in majority would be formed for electoral reforms. “The committee will look into these so-called electoral reforms and take a decision,” he said while referring to the controversial bills seeking to amend the elections act.

He noted that such issues were not solved through dialogue.

Chairman of the Standing Committee of the Senate on Parliamentary Affairs Taj Haider said that criticism on the ECP for not conducting pilot projects on I-voting or EVMs was misplaced.

To clear the confusion that had been created, it was necessary that the record on the pilot projects undertaken by the ECP should be set straight, he said in a statement.

The PPP senator said the ECP in Dec 2018 had submitted its reports on pilot tests on I-voting in 35 constituencies and its report on biometric verification machines tested in NA-120.

He said it was unfortunate that neither of the two houses of the parliament took up these reports for discussion in the last 33 months to give directives in this regard to the ECP. Instead the government appointed a foreign consultant to give his opinion on the report on I-voting who gave the opinion that I-voting at the present stage did not meet the standards required for holding free and fair elections in the country.

“The real tragedy is that consensus reached in the Senate Standing Committee on the two Electoral Reform Bills which was to be transformed into positive recommendations was torpedoed by an Advisor and a Minister,” Mr Haider remarked.

He said the government members staged a walkout in the committee on its own bills and the difference of opinion had now been converted into attacks on the person of the CEC.

“Why are some people afraid of consensus and why are they prepared to go down to any level in order to sabotage consensus,” he asked.

PML-N Secretary General Ahsan Iqbal while talking to reporters said at a time when the foreign funding case against the PTI appeared to be nearing its logical conclusion, an offensive had been launched against the CEC and the ECP to blackmail and pressurise them.

He said while levelling allegations of contemptuous nature, the government forgot that the name of the CEC had been proposed by it and not the opposition.