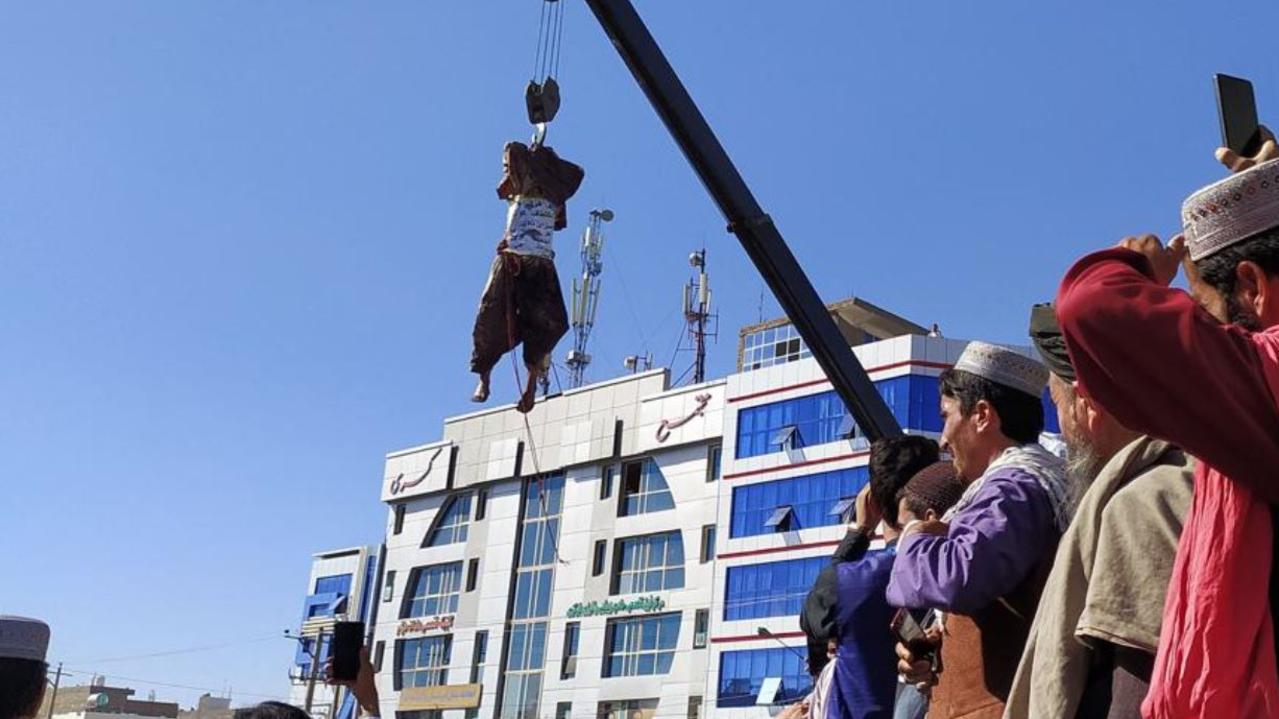 Taliban authorities in the western Afghan city of Herat killed four alleged kidnappers and hung their bodies up in public to deter others, a local government official said on Saturday.

Sher Ahmad Ammar, deputy governor of Herat, said the men had kidnapped a local businessman and his son and intended to take them out of the city, when they were seen by patrols that had set up checkpoints around the city. An exchange of gunfire ensued in which all four were killed, while one Tali­ban soldier was wounded.

“Their bodies were brou­ght to the main square and hung up in the city as a lesson for other kidnappers,” he said.

The two victims were released unharmed, he said. Herat resident Moham­mad Nazir said he had been shopping for food near the city’s Mostofiat Square when he heard a loudspea­ker ann­ouncement calling for public attention. “When I stepped forward, I saw they had brought a body in a pickup truck, then they hung it up on a crane,” he said.

Graphic images posted to social media showed bloody bodies on the back of a pick-up truck while a crane hoisted one man up. Another video showed a man suspended from a crane at a major roundabout in Herat with a sign on his chest reading: “Abductors will be punished like this”.

Wazir Ahmad Seddiqi, who runs a pharmacy on the side of the square, said that four bodies were brought to the main square and three bodies were moved to other parts of the city for public display. He said the Taliban anno­unced that the four were caught taking part in a kidnapping and were killed by the police.

Ziaulhaq Jalali, a Taliban-appointed district police chief in Herat, said Taliban members rescued a father and son who had been abducted by four armed kidnappers after an exchange of gunfire. He said a Taliban fighter and a civilian were wounded by the kidnappers but the four (kidnappers) were killed in crossfire.

Herat Deputy Governor Mawlawi Shir Ahmad Muhajir said the corpses were displayed in various public areas on the same day as the killings to teach a “lesson” that kidnapping would not be tolerated.

Muhajir said security forces received information that a businessman and his son had been abducted in the city on Saturday morning. Subsequently, police shut down the roads out of the city and the Taliban stopped the men at a checkpoint, ensuing an exchange of fire, he said. “As a result of a few minutes of fighting, one of our Mujahideen was wounded and all four kidnappers were killed,” the deputy governor said in a recorded statement.

Muhajir added that before Saturday’s incident there had been other kidnappings in the city, and the Taliban rescued a boy. One kidnapper was killed and three others were arrested, he said, although in another case the Taliban “failed and the abductors were able to make money”.

“It saddened us a lot because while we are in Herat, our people are being abducted,” the deputy governor claimed.

“In order to be a lesson for other kidnappers not to kidnap or harass anyone, we hung them in the squares of the city and made this clear to everyone that anyone who steals or abducts or does any action against our people will be punished,” he added.

The display across several squares in the city is the most high-profile public punishment since the Taliban swept to power last month, and is a sign they will adopt fearsome measures similar to their previous rule.

In a recent interview with the Associated Press, senior Taliban leader and prisons chief Mullah Nooruddin Turabi had warned that the group would restore punishments like amputations and executions to deter criminals.

Despite international condemnation, the Taliban said they would continue to impose swift and severe punishments on lawbreakers to stop crimes like robbery, murder and kidnapping that had become widespread in Afghanistan.

In this article:Afghanistan, Herat, public hanging of kidnappers, Taliban