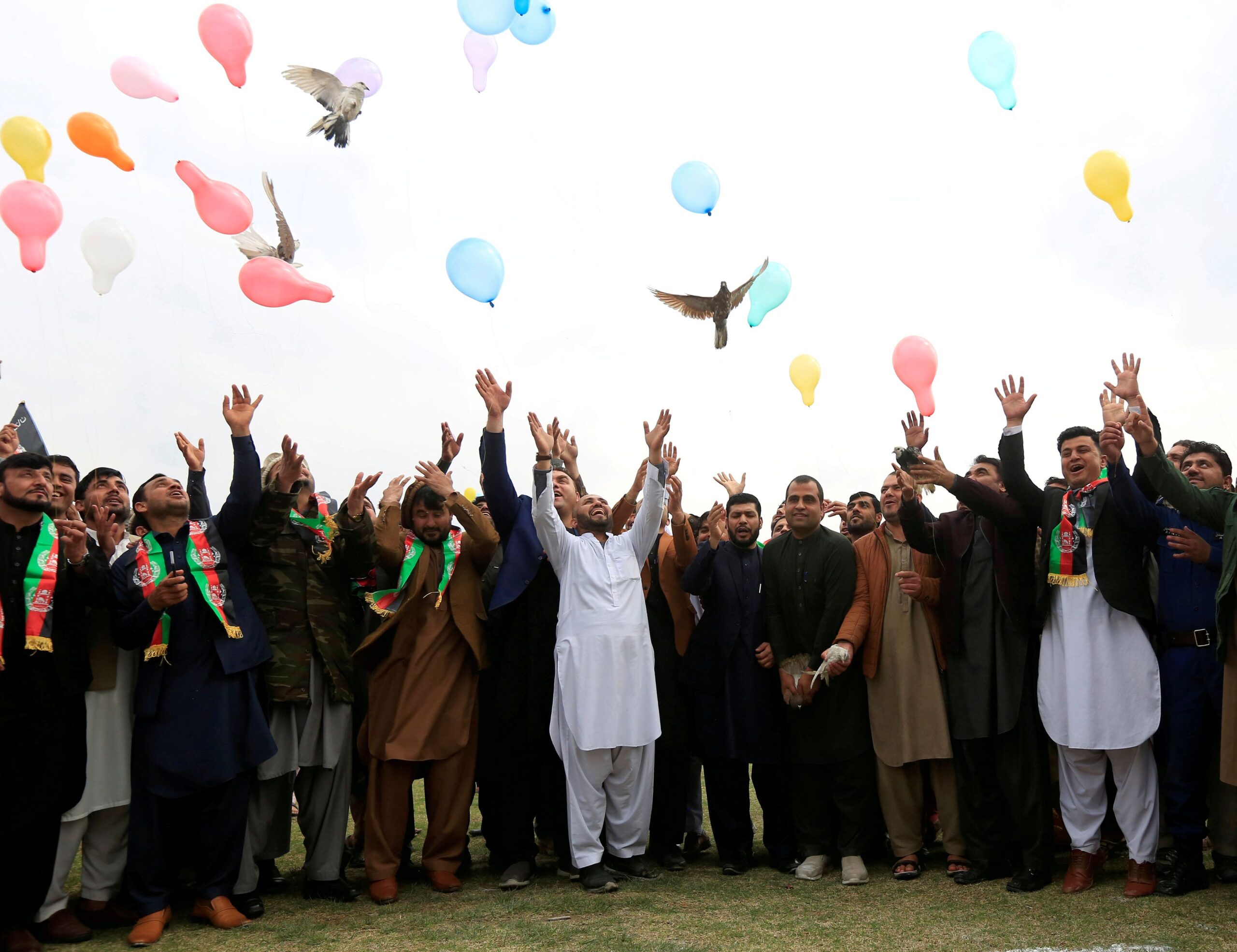 Afghan men celebrate in anticipation of the U.S-Taliban agreement to allow a U.S. troop reduction and a permanent ceasefire, in Jalalabad, Afghanistan February 28, 2020. Picture taken February 28, 2020.REUTERS/Parwiz TPX IMAGES OF THE DAY

On May 15 1988, exhausted Russian forces were relieved to cross over Amu Darya Bridge out of Afghanistan, cutting further losses in an unwinnable war. Russians’ hasty withdrawal created a power vacuum in Afghanistan, leaving behind a black hole for armed militias and the weakened Afghan government forces.

No power-sharing formula was left by the two superpower guarantors of the Geneva Accords. Seven groups Mujahideen alliance supported by the USA, Saudi Arabia, and Pakistan, the Kabul government, and the North Afghanistan warlords supported by Russians, embroiled in the struggle for domination of Afghanistan. Russians airlifted arms and food supplies to Kabul while Americans supplied arms and cash to Mujahideen through Pakistan; Iran armed Shia groups. After three years of ruthless and bloody civil war, the Mujahideen Alliance took over Kabul in 1992. For a generation grown as fighters with tribal under- pinnings, fighting became the most lucrative profession in war-torn Afghanistan. Weakened by civil wars, the seven Mujahideen groups, Ahmed Shah Masud, Rashid Dostum, the Hazaras, the Nuristanis, etc., all grabbed maximum landmass transforming them into armed garrison fiefdoms, erecting check posts, governing people under their control using various forms of extortion techniques in lieu of pseudo-peace. Afghanistan’s neighbors were not strong enough to wield any decisive power for conflict resolution. Afghan people fed up by divisive handling of multiple armed fiefdoms welcomed the rise and take over by ‘puritan’ Taliban in 1996. Taliban practi- cally provided peace and stability in the areas under its control. Their rapid successes sucked in lots of fighters from other militant groups and their ranks swelled. Al-Qaeda also became a significant part of Taliban war machine by this time.

But the Afghan people had to pay a price for this piece in the form of strict implementation of Islamic Sharia throughout Afghani- stan. Taliban made Afghanistan arms free and poppy free but in exchange, criminals had to face lashes, cutting of hands, and firing squads for crimes. Females in public were forced to remain in purdah and faced restrictions on higher education and job seeking. Men were strongly urged to grow beards and act upon strict codes of Islamic ethics in public. More than a million died under Russian occupation, and tens of thousands died in civil wars (1989 – 96), a large number tortured, maimed, and faced sexual violence.

Sadly, Joe Biden in September 2020 said: America bore “zero responsibility” if the Afghan Taliban come back to power. “The responsibility I have is to protect America’s interest and not put our women and men in harm’s way … that’s what I’d do as President.” Implying that USA like Russia of 1989 may also abandon Afghanistan to self-heal its wounds.

Irony of modern times is that superpowers invade weaker nations like Afghanistan, ransack the infra-structure, destroy the semblance of societal harmony and on failure to achieve its objec-

tives leave the destroyed nation and wish to be remembered as facilitators of peace.

Loopholes in 2020 US-Taliban peace agreement are;

Given more than forty years of war torn Afghanistan and loopholes mentioned above, fastest way to bring peace and stabili- ty is that USA fully support Taliban (from whom they took power in 2001) in governing future Afghanistan. In return, Taliban should be convinced to incorporate as many democratic reforms and female rights achieved in the past two decades. Corruption ridden Afghan government, originally installed by USA must be made to realize that they should cooperate with the victor, the Taliban for peace building in Afghanistan. Taliban, who have been running a shadow government for the past several years, under their controlled area, are a much reformed group unlike pre-9/11, hungry for international acceptability.

USA, Russia and China must chalk out a combined “Marshal Plan” urging India, Pakistan and Iran to go for competitive cooperation in rebuilding Afghanistan. Strategic dominance and competition between Islamabad, Delhi and Tehran will only create havoc in the region. Every stakeholder should realize that there is never a winner in a civil war, only war continues till a balance of power is achieved.

In the words of Dr. Maria Effendi from PolicyEast, the phenome- na of post conflict resolution peacebuilding is governed through five R’s: Reconstruction of war torn infrastructure, Rebuilding of institutions, Reconciliation between or among war factions, Rehabilitation of survivors and perpetrators and Reintegration of former combatants.