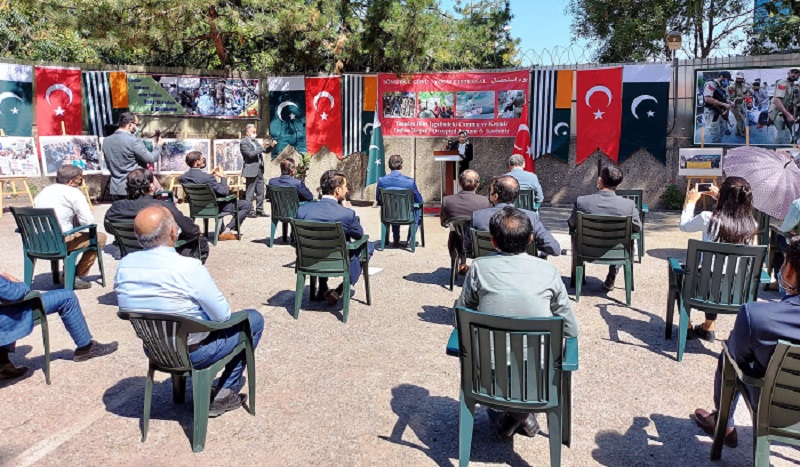 ANKARA: Pakistan and Turkey observed ‘Youm-e-Istehsal’ in Ankara to support the cause of the suppressed Kashmiries in the Indian Occupied Kashmir.

The Embassy of Pakistan Ankara organized an event to observe “Youm-e-Istehsal” as a show of solidarity with the oppressed people of the Indian Illegally Occupied Jammu and Kashmir (IIOJK), held today in Ankara. Representatives of civil society, media, think-tanks, and Kashmiris living in Ankara attended the event.

Messages of the President and Prime Minister of Pakistan were read out by Deputy Head of Mission Arshad Jan Pathan. Showing solidarity with the oppressed Kashmiris, Pakistani leadership in their messages urged the international community to hold India accountable for gross human rights violations in the IIOJK and hold a plebiscite to settle the dispute which is key to peace and stability in South Asia. Both the President and the Prime Minister said that the Indian atrocities in IIOJK are a manifestation of rising Hindu Fascism that wants to change the demographic structure of the occupied territory through new domicile rules and new land ownership laws. The people of IIOJK are being subjected to collective punishment by the Indian Occupation Forces, which have turned the territory into the largest militarized zone in the world. Pakistani leadership reaffirmed continuation of its steadfast support to Kashmiris till the realization of their inalienable right to self-determination and a just resolution of the Jammu and Kashmir dispute, in accordance with the relevant UNSC resolutions and the wishes of the Kashmiri people.

Turkish Parliamentarian Ms. Asuman Erdoğan, who is also Chairperson of the Asian Parliamentary Assembly Group in the Turkish Parliament, reiterated Turkey’s support for the oppressed Kashmiris. Condemning the human rights violations and oppression of Indian occupation forces in Kashmir, Ms Erdoğan said that Turkey would remain steadfast in its support for the genuine cause of the Kashmiris.

Ambassador Muhammad Syrus Sajjad Qazi in his speech thanked the Turkish nation and the leadership for their unwavering support for the oppressed Kashmiris in IIOJK. He urged the international community to come forward and play their role in resolving this dispute as per the wishes of the Kashmiris through a plebiscite as enshrined in the UN Security Council Resolutions.