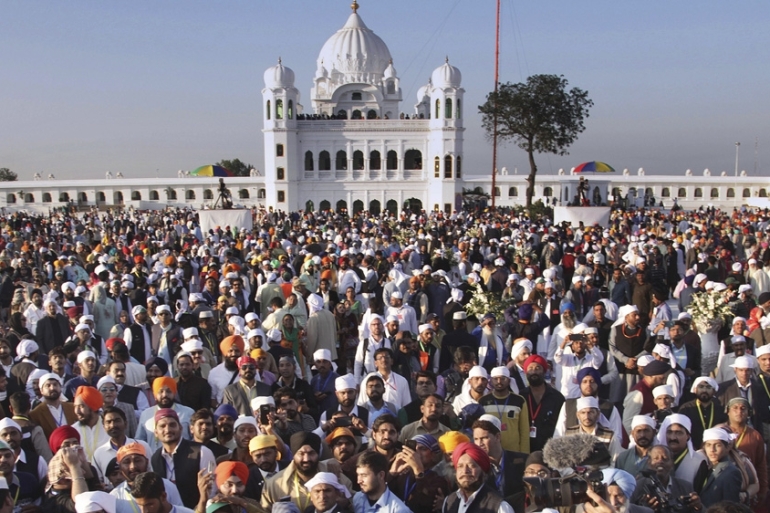 KARTARPUR, Narowal: Two friends who were separated 74 years during the partition of the Subcontinent reunited in Kartarpur amid 552nd birth anniversary celebrations of Guru Nanak Dev. Their picture went viral on social media when they identified each other. Their reunion is being termed a miracle that took place at the shrine of Baba Guru Nanak in Kartarpur, Narowal.

The reunion is ironic for several reasons. Kartarpur shrine was frequented by these two friends in their childhood and this is the place where they bumped into each other by pure coincidence, especially given the fact that one of them is a Muslim.

Thousands of Sikh pilgrims from India have visited Pakistan for celebrating the 552nd birth anniversary of Guru Nanak.

During the ceremony, 94-year-old Sardar Gopal Singh from India and 91-year-old Muhammad Bashir from Pakistan bumped into each other.

Originally they both come from Narowal and Kartarpur is part of Narowal district.

They had spent their childhood in the same region, frequenting Kartarpur shrine and having the langar there.

After the partition they could not contact each other. This year the birthday celebrations of Guru Nanak Dev reunited them.

They hugged with moist eyes and relived their childhood. Their greeting picture went viral on social media. Kartarpur corridor opened in 2019 allowed Gopal Singh to cross back to the place where he was born.