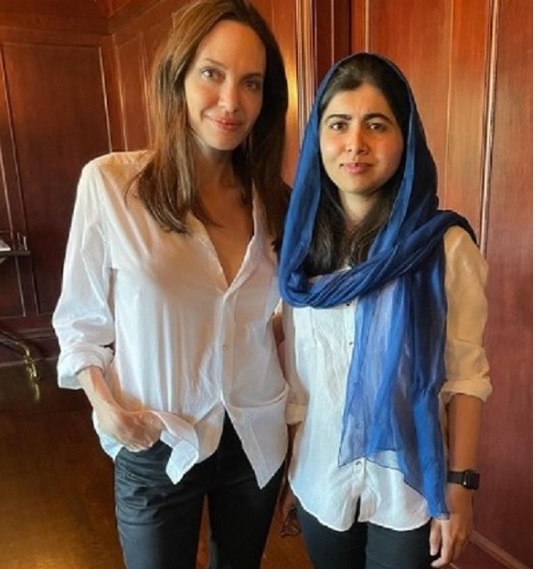 Nobel laureate Malala Yousafzai has appreciated American actress and activist Angelina Jolie for publishing a book that gives children “the knowledge they need to stand up to injustice”.

Yousafzai posted a picture of herself with Jolie on Instagram and spoke about the book. “Children make up almost one-third of the world’s population. Just like adults, children have rights,” she wrote. I’m proud of my friend Angelina Jolie and Amnesty International for writing Know Your Rights, a book to give children the knowledge they need to stand up to injustice in their own lives and around the world.

“To the children and young people who are reading this: You have rights that are equal in status to that of any adult. No one has the right to harm you, to silence you, to tell you what to think or believe, to treat you as if you don’t matter, or to prevent you from participating fully in society,” Yousafzai stressed.

The Nobel laureate also shared Amnesty International’s video on Twitter in which Jolie talks about children under attack from “governments, teachers and parents” who fail to protect them.

“It isn’t just that children need to know about their rights, or people need to know about their rights,” the actor explained in the video. “It’s that we do know. We do know what is absolutely healthy, and decent and fair for a child. There is intent to silence children. There is intent to control children, there is intent to turn a blind eye and allow others to harm children. So, it is not this beautiful thing of wanting to just appreciate and love your rights. It is about understanding it is a fight. And children have been under attack for a very long time.”

Recently, both Yousafzai and Jolie have doubled down on highlighting the crisis the Afghan people, especially children, are facing after the Taliban takeover of Afghanistan. Jolie joined Instagram to share a letter she received from a teenage girl in Afghanistan to give voice those who are “losing their ability to communicate on social media and to express themselves freely”.

Yousafzai urged the world leaders to take steps to ensure the safety and rights of Afghan women, children and minorities.