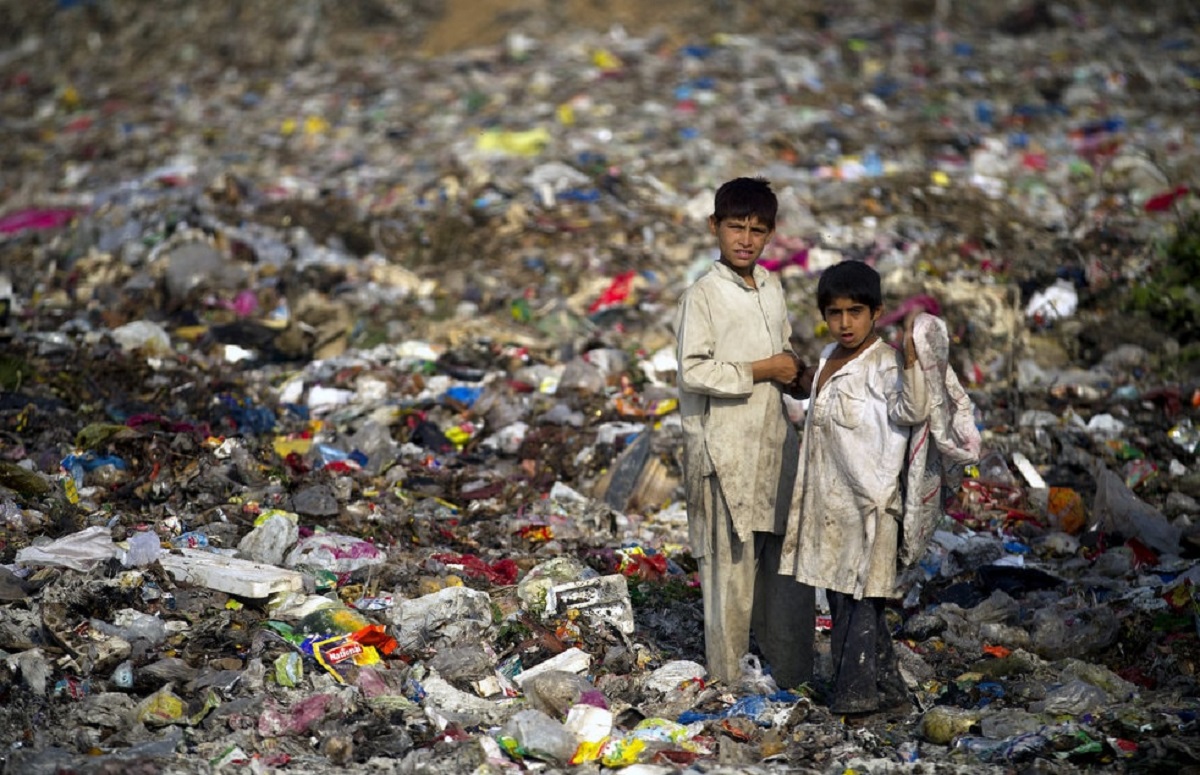 A family friend while giving me directions to her house mentioned a huge garbage pile near her street. Now this is a posh street lined by large, well-con- structed houses. One imagines the highly educated, cultured residents of those fine houses to be bothered by littering all around them. But you are mistaken.

The problem of littering is so pervasive in our country that the residents of large cities have become attuned to littered surround- ings. Seeing people use heaps of garbage as landmarks and poor little boys and girls root through garbage has stopped to shock many Pakistanis. These garbage scavengers manage to collect almost all the metal and glass, 95 percent of paper, and almost 60 percent of plastic waste while their suffering goes undocumented and unrecognized.

In 2016, the world generated 242 million tons of plastic waste. In the next 30 years, it is further expected to grow by 70 percent. However, at the same time, the same plastic is used as a commodity in the global indus- try generating USD 200 billion every year. The World Bank report states that by 2050, in the absence of required actions, on current levels the global waste will increase by 70 percent.

Per year, Pakistan produces nearly 50 million tons of solid waste which makes almost 135,000 tons per day, a tenth of it coming from Karachi. The alarming part is that it is growing by some 2.4 percent each year.

Syed Ayub Qutub, Executive Director Pakistan Institute for Environment – Development Action Research (PIEDAR) says Pakistan produces a mere 0.8 kilos of waste per person compared to the global average of 1.42 kg. “Municipal authorities in Pakistan only manage to collect half of this waste”, says Qutub, adding the waste thus collected ends up in landfill sites, the hazards of which for the environment are undeniable.

Dumping the garbage also requires land and dedicating large areas of land for this purpose, which is becoming more costly by the day with prices of urban properties on the upsurge. The landfill sites are being overfilled and there is no space for extra waste. Lahore’s only landfill site and Karachi’s two landfill sites are nearly filled up.

Surprisingly, Islamabad does not even have a permanent landfill site yet. The federal capital proudly dumps its garbage in open spaces in the outskirts of the city.

What is more, a lot of urban trash falls through the yawning cracks of the system. For instance, only 60 percent of Karachi’s solid waste ever arrives at the landfill site, the remainder ending up in storm drains and city streets. In the clear absence of formal recycling facilities in Pakistan, an informal recycling industry, which is recycling roughly 27 percent, is making its way through garbage pickers and sanitary workers who buy recyclables from households or pick out metal and cardboard items from waste and sell them to scrap dealers who buy plastic, paper, glass, and metal per kg from the scavengers and sell what they collect to factories either directly or through middle- men.

The small informal industries reduce these materials into composite forms which are further used for producing new products. But high-quality plastic manufacturers in Pakistan import raisin and pellets due to contaminated local product from not being disposed of carefully.

Pakistan has rarely any waste segregation practice. In Lahore, Green Earth Cycling is amongst a few which specialize in waste material recycling and reproducing while depending on local contractors relying on scavengers for plastic and paper collection. They manufacture products like outdoor furniture, roofing sheets, manhole covers, and pellets. Pakistan’s biggest city, Karachi is blessed with an alluring sea, or once it was – as sailors now call it a sea of trash. The sport of sailing no longer has a playing field by virtue of the plastic bags and bottles messing with not only the sea but is a menace to the marine life too. Putting a ban

on plastic items sounds like a solution but that is not it.

Qasim Abbas, a sailor from the Pakistan navy mentioned that since 2008, a consequential hike is noticed within Pakistan’s maritime boundaries. Karachi’s sea receives approximately 4,000 tons of garbage and around five million gallons of sewage water along with waste and oil from vessels. When it rains, the garbage littering streets and storm drains ends up in the sea.

Recently, the Pakistani government is seen getting into action (which is a rare sight) about garbage collection. Unfortunately, the action does not involve solving the problem but just transferring it as the waste is being picked and dumped far away out of sight. This practice is pushing cities like Karachi and Lahore to the top in the list of areas with the worst air quality.

A study by the World Wildlife Fund found out that an average person is possibly ingesting about five grams of plastic every week. This clearly depicts the deteriorating quality of life since no matter where the garbage is dumped, it seems to find its way into our food chain.

However, the countries receiving this waste are not properly equipped to dispose it off. In 1988, Italian waste management firms stored high-risk waste in a Nigerian Fishing village in drums. In 2013, a Canadian firm dumped repatriating waste, including nappies in the Philippines.

A little known treaty called the Basil Convention empowers poorer countries to reject the flood of exported waste starting from 2020. China, in 2018, also banned the import of cheap and contaminated plastics which pushed developed countries to find another destination for their waste.

European countries are the first ones to introduce policy promoting separation of waste and are leading the way in the recycling field. Focusing on environmental protection, Sweden has focused on transforming its combustion into energy that provides electricity to the 250,000 homes in the country. The country further imports trash from Germany and the UK. With a high metal recycling rate, Japan is on its path to zero waste depending on its general public majorly.

In 2020, the town of Kamikatsu recycled 90 percent of its waste. Netherlands center of attention is reutilization and sustainability as the country constructed two of its bike paths entirely out of recycled plastic. Wales has jumped from recycling 5 percent of household waste to 64 percent in just 20 years. The country aims to not have any waste in incinerators by 2050. Germany’s recycling rate was 66.1 percent in 2015 and in 2016, Wales recycled 63.8 percent of its waste. Countries like Singapore, South Korea, Taiwan, Netherlands, Austria, Slovenia, Belgium, Switzerland, and Italy have more than 50 percent of the recycling rate in the years 2015 and 2016.

A huge factor that does not let civil society improve conditions are garbage mafias regulating the informal recycling industry and have forcefully kept the waste industry 20 years behind the rest of the world. In their presence, the collaborations and partnerships of young companies prove unfruitful even with modern approaches. The garbage mafia hides several pressing issues under its umbrella, like child labor, child pedophilia, using drug addicts as garbage collectors in exchange for drugs, and so on. These mafias can only be dealt with if the government and civil society work closely.

The social enterprises are giving their best but they are just able to cater to the tip of an iceberg. ‘Saaf Suthra Sheher’ an Islamabad-based social enterprise established in 2016 has recycled 111 tons of waste in total for Islamabad’s population producing nearly 1,000 tons of waste on daily basis. The enterprise believes that 60-80 percent of that waste is recyclable.

Similarly, ‘TrashIt’ is a Karachi based social enterprise set up in 2017 that collects organic waste and turns it into organic fertilizer. It is only able to process half a ton out of some 13,500 tons of organic waste generated every day by more than 20 million residents of this megacity.

Last year, the Sindh Solid Waste Management Board purchased over 200 Qingqi rickshaws to collect garbage from ‘door-to-door’. In one week, the three-wheelers collected and disposed of 145,000 tons of garbage. This looks like a good initiative but whether it can be scaled to meet the needs of Pakistan’s most populous city.

Every now and then, we see environmental activists launch campaigns to clean up places like Clifton beach. But that is absolutely not enough. Public messaging and awareness campaigns can only do so much which hints at the option of launching incentive-based schemes.

In Nigeria, social enterprises like WeCyclers and Greenhill Recycling have been incentivizing residents of low-income neighborhoods with electronics, groceries, and cash in exchange for their sort out recyclable waste. In the Philippines, the Manila City government began a similar program through a public-private partnership with Unilever Philippines.

There are a number of industries dependent on recycled waste like the glassware industry, packaging industry, and the industry manufacturing plastic crockery, pipes, furniture, buckets, mugs, etc. Similar incentives and public-private partnerships if encouraged by the Pakistani government formally can create a huge impact.