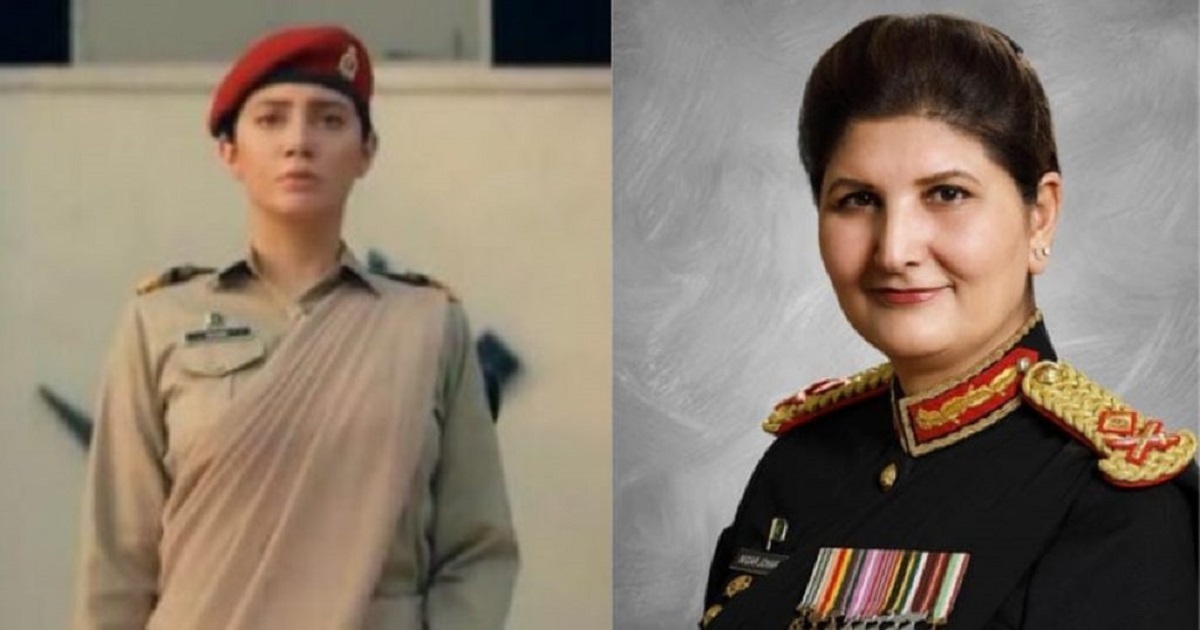 Shooting has started for ISPR’s Lt-Gen Nigar Jauhar biopic starring Mahira Khan and Bilal Ashraf. The movie heralds the life and career of Pakistan’ first female three-star general. It will be a telefilm that will air on ARY Digital.

Mahira posted a short teaser, rather a first look of this high-profile telefilm with a note saying, “Honoured to be able to play a woman I admire so much. Pakistan Army’s first female three-star General. ‘Aik Hai Nigar’ traces the life and career of Lieutenant General Nigar Johar.”

The telefilm is being made for ARY Digital. It has been written by Umera Ahmed and directed by Adnan Sarwar. Mahira Khan and Nina Kashif are producing the film under the banner of their production house Soul Fry Films.

Hailing from Swat, Nigar Johar is the first and the only woman in the Pakistan Army to have become a three-star general (Lieutenant-General).

Although, staring in such an important and touchy biopic Mahira must have grasped and rehearsed the character at her best but sources close to the “Raees” star disclosed that she is enthusiastic enough, and eagerly waiting for the completion of this project,

From the mischievous ‘Chief Saab’ to ‘Sahil Per Khare ho’, Sajjad Ali is all

time favourite of music lovers. He moved from Pakistan to UAE at his carrier peak and after spending almost two decades there. The news is that Sajjad Ali has moved back to his homeland but this time he is settling down at Lahore instead of Karachi.

The credit for this development goes to Sajjad’s lovely daughter Zaw Aly who was responsible of bringing her parents over.

Sajjad is not only planning new musical projects but the doors of his Lahore residence are wide open to his friends from Karachi. Nadeem Jafri and Tehmeena Khaled recently enjoyed Sajjad’s hospitality in Lahore. A warm welcome with wide open arms and delicious food might not be a big deal for guests but melodious company of Sajjad Ali must be a treat to remember.

Sajjad is an ocean of knowledge and talent, combining a noncontroversial celebrity but rumours are rumours, and those who trade in this commodity did not spare even someone like Sajjad Ali. An unconfirmed news was circulating on social media last year that he is going marry leading actress and host of Pakistan TV industry Fiza Ali.

Fiza could not remain silent on the rumours and shared a video on her Instagram account in which she openly expressed anger over the mischievous item, saying, “Sajjad Ali is like my brothers, he is my teacher, he is the capital of Pakistan.”

Rumours apart, news is also that Sajjad is all set to launch some amazing music projects not only in Lahore but also in Karachi where an entertainment channel is planning something big with the maestro. Best of luck Sajjad Ali and welcome back home!

Renowned comedian producer, director, host, and theatre celebrity par excellence Umar Sharif is facing serious health issues these days. To make matters worse, his third wife (actress) Zareen Ghazal is said to be giving him a tough time. She is allegedly all set to sell his Karachi apartment worth PKR 110 million, according to claims from his lawyer.

Omar Sharif is said to be amnesiac. The apartment in question was a personal investment the actor made via bank loan back in 2016. According to claims his wife made an official gift deed, following his diagnosis in 2020, and decided to move forward with the selling process without his consent.

Omar Sharif recently took to the Sindh high court in a bid to stop his third wife from selling his personal property. Although the court issued a temporary restriction on the sale of this property until further proceedings, social and showbiz circles close to the couple are astonished to hear this surprising conflict.

Sources close to Omar Sharif are of the view that his first wife and sons are seriously concerned of his deteriorating health condition and want to resolve all his property related issues as early as possible.

Omar Sharif was born in Karachi on 19 April 1955. His first marriage was arranged his first wife lives in Lahore. Sharif then got married to actress Shakila Quraishi but unfortunately this did not last long. Omar Sharif then married popular stage dancer and actoress Zareen Ghazal. She is still his wife but this property conflict between them is threatening to rock the couple’s married life.