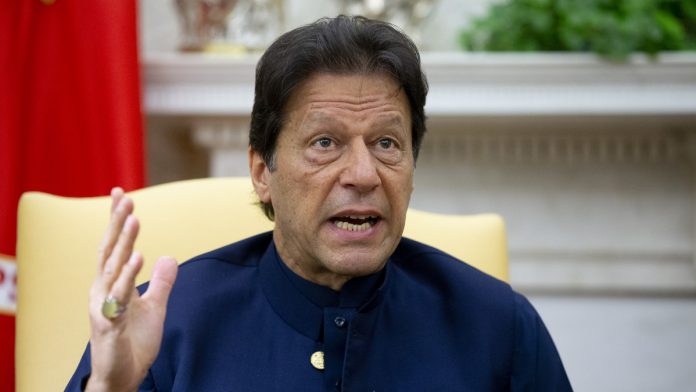 Prime Minister Imran Khan on Tuesday said that in the absence of a “tax culture” in Pakistan, the very country’s sustainability is at stake.

His remarks came during the launch ceremony of the Federal Board of Revnue’s Track and Trace System for the sugar industry.

Hailing the introduction of the system, which he observed had been a struggle by the FBR since 2008, the prime minister said that it had already been rolled out for the tobacco industry and would now extend to the sugar industry as well.

He said there are plans to implement it for the cement, fertiliser and in the rebar (iron bars used to reinforce and strengthen concrete) sectors.

The premier said this positive development today will have “far reaching consequences”.

Speaking of the challenges Pakistan faces, he said the foremost issue that the government has to deal with is that “it does not have enough money to run the country, which is why we have to take loans”.

He likened the situation to a household which continues to struggle due to financial constraints and never is able to advance since it never has enough savings to invest in the future.

PM Imran Khan said that in Scandinavia, the tax-to-GDP ratio is 50%, whereas in Pakistan, “a tax culture was never created”.

He said that evading tax was “never considered to be a bad thing”.

Why was a tax culture never developed in Pakistan?

The prime minister said that he had analysed the reasons for this. One was that there had been the “colonial culture” in Pakistan in the past. “When there was foreign rule, people would almost consider it a good deed to not pay taxes,” he said.

He said there were those who were of the view that the tax will be collected and spent on them, but others saw it to be a pointless exercise, thinking that it will be taken abroad, “so what’s the use?”

PM Imran Khan said another reason behind the lack of a tax culture is that after independence, the “ruling elite” in Pakistan never wanted it to take root, because they wanted to continue their lavish lifestyles without being questioned.

He said that in other countries, for instance England, leaders are constantly made aware of the fact they are spending the people’s money paid through taxes.

“The ministers of a country with a population of 60 million and whose GDP is 50 times that of ours, have been ordered to travel via economy class if the flight duration is less than five hours,” the premier said.

He said even the British prime minister, when he went to the US, stayed in a room at the embassy so as to avoid unnecessary expenditure, while drawing comparisons with Pakistani prime ministers who spent “10 times as much” on their foreign tours.

The prime minister explained that this culture is found even among students abroad who point out whenever the taxpayers’ money is being spent wisely or unwisely. “So the people are conscious and the government, too, is very aware of the fact that they are accountable to the people.”

“It is so important that this culture is developed in Pakistan because our very sustainability is at stake here,” he said, adding that in between 2008 and 2018, Pakistan’s debts saw a four-fold increase.

“It astonishes me. These people should be punished. In 10 years, the debt which stood at Rs6 trillion soared to Rs30 trillion,” the prime minister added.

He said that all the while, “no big projects which could benefit the country were introduced”.

“So our challenge was tax collection and I laud the FBR team for a record tax collection,” he said, adding that the government aims to take it to Rs8,000 billion.

PM Imran Khan said, of this amount, Rs3,000 billion will go to debt repayments. “And we will be left with Rs3,000 billion for a population of 220 million,” he said, adding that their health, education needs and infrastructure needs will need to be served.

“And then we need to invest, in research and agriculture, which has so much potential,” he said.

The prime minister said without enough money to support all these projects, the government ends up having to take loans “and we remain in this vicious cycle”.

“The only way it will break is if we ramp up our tax collection,” he said, adding that that will only be possible with the use of technology and the track and trace system marks a big step in that direction.

Speaking of the youth, he said that they will end up being the “engine of growth” for Pakistan and will need to be invested in, which is only possible through more earnings.

The premier said that the government is working full throttle to bring a change when it comes to the luxury lifestyles of the ruling elite for which an austerity campaign is in full swing. Pointing in the distance, he said the expenditures of two offices of the FBR have “witnessed a reduction of Rs1.1 billion, despite inflation”.

He said that when the people see that money is being spent on them and taxes are for the welfare of the people, the change in perception will come automatically.

Earlier, a statement issued by the Prime Minister’s Office said that the system will also be used to monitor the goods’ movement from production to sale in major sectors like fertilisers and cement in the next phase.

“The scope of electronic surveillance will extend from the production of goods to the utilisation by the consumers, which will enhance the country’s revenue generation, bring transparency in the system and prevent tax evasion,” the statement said.

After implementing the track and trace system in the tobacco sector, the FBR is now rolling out the electronic monitoring in other major sectors like sugar, it added.

FBR is also planning to introduce the system in the beverages and petroleum products sectors soon.

As soon as the system starts working in the sugar sector, no bag of sugar can be taken out from production site, factory or manufacturing plant without stamps and individual identification.

It is pertinent to mention the track and trace system went into effect on November 11, 2021.