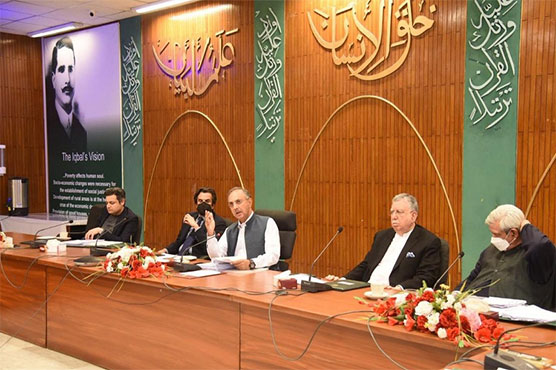 ISLAMABAD: The government on Monday scrapped two tenders for the wheat import after the bidder offered a record high price of $407.4 per ton that translated into Rs74 per kilogram at the Karachi port, as the government decided to meet the wheat needs of Afghanistan.

The Economic Coordination Committee (ECC) of the Cabinet decided to scrap the 7th and 8th wheat import tender due to “higher prices”, according to handout issued by the Ministry of Economic Affairs.

The meeting, chaired by Economic Affairs Minister Omar Ayub, also deferred its decision about increasing profit margins of oil marketing companies by 23.3% and oil dealers by 25.2% amid a strike call by the dealers this week against low margins.

In response to the 7th tender, the Agrocorp had offered 90,000 metric tons of wheat at $394.4 per ton that translated into Rs70.4 per kg at the Karachi port. The $394.4 price was far higher than the prevailing international price of $329 per ton.

“The ECC after due deliberation recommended the proposal regarding scrapping of the 7th tender offered by the TCP [Trading Corporation of Pakistan] and floating of fresh tender,” according to the Economic Affairs Ministry.

As for the 8th international tender for import of wheat, the Agrocorp had offered the $407.4 per ton price that was equal to Rs74.1 per kg at the Karachi port, the ECC was informed by the Ministry of National Food Security and Research. The ECC also recommended the proposal for cancellation of the 8th tender on the basis of higher prices, the ministry added.

The ECC directed the Food Security Ministry to re-assess the need and requirement of neighbouring country, Afghanistan, for wheat, according to the official handout. The decision was a departure from an earlier assessment when the government had decided to stop wheat import on the ground that it had significant quantities to meet the requirements, including those of Afghanistan.

The ECC approved the summary presented by the Commerce Ministry for elimination/reduction of tariffs on various items, currently being imported from Afghanistan as a goodwill gesture

The Pakistan Tehreek-e-Insaf (PTI) government has promised to provide wheat flour at Rs55 per kg but it has not been able to fulfil the promise. The ECC had allowed import of 4 million tons of wheat and the TCP had so far awarded 1.9 million tons through an international open tendering process in five tenders.

The average import price of 1.9 million tons of wheat came in at Rs2,533 per 40 kg, according to the food ministry.

The ECC was informed earlier this month that the current wheat stocks stood at 5.4 million tons and with the additional import of 1.572 million tons, the total quantity would increase to 6.934 million tons, which was sufficient for 182 days or till the first week of June 2022.

After meeting the requirements till the start of harvesting in March-April next year, there will be 1.6 million tons of remaining stock, according to the Food Ministry.

The committee also discussed the summary tabled by the Energy Ministry for revision of OMCs and dealers margins on petroleum products – motor spirit (MS) and high speed diesel (HSD) with effect from forthcoming revision in oil prices.

According to the Ministry for Economic Affairs, the committee desired that the summary might be tabled in the next meeting after soliciting comments and views from all the members of the committee.

However, the dealers association has demanded the margin of 6% on the ex-depot price, warning that otherwise, they would observe a daylong countrywide strike this week.

The ECC approved the summary presented by the National Health Services Ministry for grant of custom duty and tax exemptions on the donations of Personal and Protective Equipment (PPE) testing laboratory equipment by the USAID-funded programme – Promoting Quality of Medicine Plus (PQM+).

The ECC recommended the summary tabled by the Communication Ministry for special allocation of Rs6 billion funds to initiate the process for improvement and rehabilitation programme of Balkassar-Mianwali (N-130) and Mianwali -Muzaffargarh (N-135) roads. The budgetary funding has been approved after the project could not be taken up in the public-private partnership mode.

The committee also recommended funds for payment of salaries to the employees of the Heavy Electrical Complex (HEC) and mark up to Bank of Khyber with directions to finalise the privatisation of the HEC by Mid-January 2022.