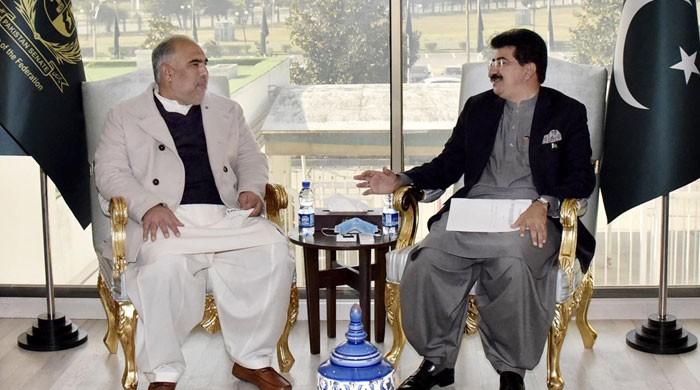 Supreme Court issued notices to the NA speaker, provincial assembly’s speakers, the federal and provincial advocate generals, and the Election Commission of Pakistan for a hearing of the presidential reference for holding Senate elections by open ballot on January 4.

Senate Chairman Sadiq Sanjrani and National Assembly Speaker Asad Qaiser met on Monday and decided to take a joint stance in the Supreme Court over the presidential reference on the Senate elections with their independent legal representatives.

Senior lawyer Latif Yousafzai will represent the NA speaker and Senate will be represented by Senator Muhammad Ali Saif.

As per the reference, the president has looked for the apex court’s opinion on the condition of holding a secret ballot referred to in Article 226 of the Constitution is applicable only for the elections held under the Constitution and “not to other elections such as the election for the members of Senate” held under the Elections Act 2017 enacted to pursuant to Article 222 read with Entry 41 (1) of the Fourth Schedule to the Constitution “which may be held by way of secret or open ballot” as provided for in the Act.

The government says that the election’s nature and its process are not mentioned clearly in the Constitution and that the elections are conducted according to the Election Act of 2017 and asked on the possibility of introducing the concept of open-balloting in the upper house of the Parliament.