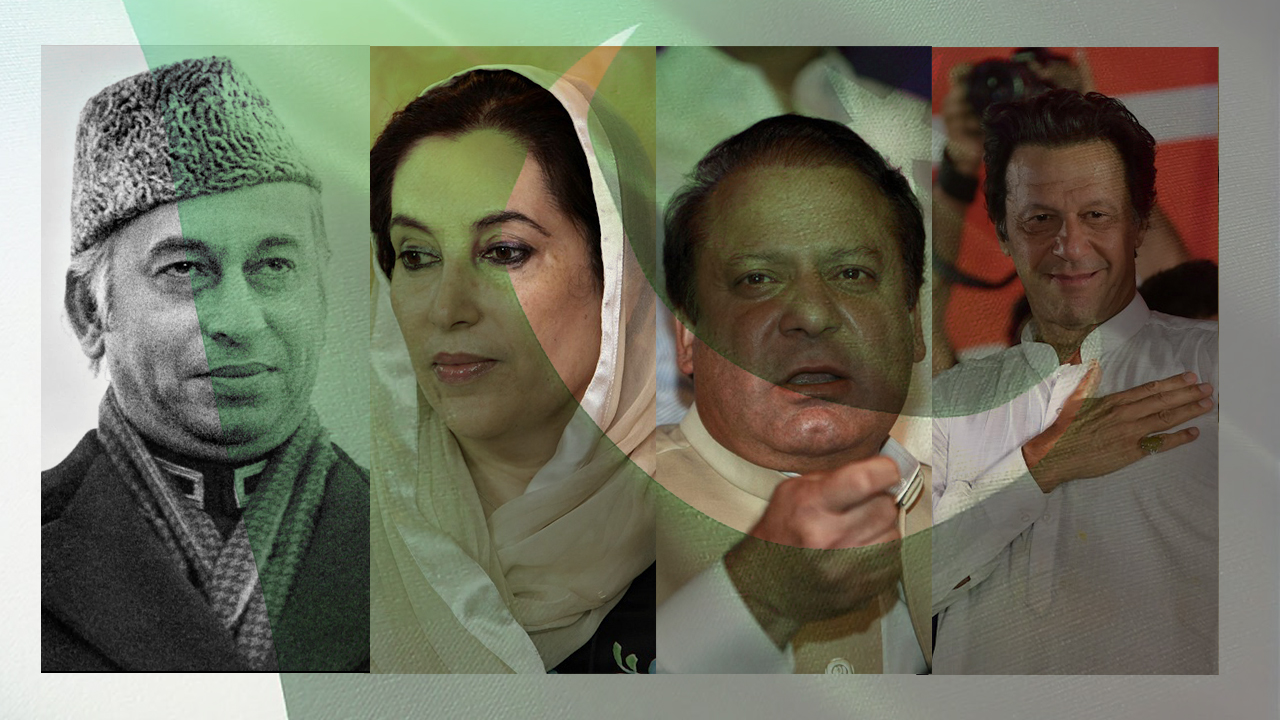 No political lexicon includes the term “Minus One Formula”. Ask a political science professor at Harvard and they will sound ignorant as for the Formula and what it implies. In Pakistan, it is different though. Even the man in the street here is well versed in the “Minus One Formula” as the phrase is a regular feature of our political discourse — a local infection, as it were.

Will Prime Minister Imran Khan be the next victim of the Formula? That is the question being asked by many today. If the Formula is slapped on him, how will PM Khan respond, media debates enthusiastically. PM Khan has himself mentioned the sleazy Formula, rubbishing it albeit, in a recent parliamentary speech. From the PM to the peasant, in a word, we all know the formula inside out.

It is an unthinkable monstrosity in any constitutional dispensation but in our polity it is thriving. Popular party heads, who have enough political following to garner votes for their candidates in a decent number of electoral constituencies, qualify for the minus-one status. The formula comes into action, however, only for those popular politicians who deviate from the dictated line, history testifies.

The term Minus One Formula was first seen in print during the first term of Benazir Bhutto (1988-1990) though, the concept had been there for a long time since 1947 perhaps. Let’s not discuss the details of that fateful journey of Jinnah sahib on 11th September 1948, in that dilapidated ambulance that broke down on the way.

The first Prime Minister of Pakistan Nawabzada Liaqut Ali Khan may be a good starting point to trace the history of the minus one concept. L.A. Khan was the confidant of the Quaid, most respected and popular politician after the father of the nation. He had all the credentials to qualify for the minus one status. Hence, on 16th September 1951, in broad daylight, at Company (Bagh) Garden Rawalpindi he was killed while he was addressing a public gathering. His suspected assassin Said Akbar was shot dead minutes after Liaquat’s murder. Finally, the chopper carrying the investigation record of the case was crashed. Mystery shrouds the murder of Pakistan’s first premier to date as for who the assassin was working for. That was the birth of the infamous formula; the most towering of us was murdered with impunity.

After Jinnah, the most popular and revered figure in the country was that of Madir e Millat Mohtarma Fatima Jinnah. The entire nation looked up to her for guidance as she was not merely Quaid’s sister but his aide and confidant, a true soldier in the struggle for Pakistan. Immediately after Quaid’s death, she was removed from the national scene, her contact with her countrymen was deliberately and systematically broken. It was only after a couple of years of Quaid’s death that she was allowed for the first time to communicate with the people through a radio broadcast, parts of which were censored. Her book, My Brother, was judged against the ideology of Pakistan, and not allowed to be published. She was dubbed an Indian agent by General Ayub Khan when she decided to contest the presidential election against the tin-pot dictator. The worst was, however, yet to come.

She died due to ‘cardiac arrest’ on 9th July 1967. But her Ghussaal (the one who had given her corpse the bath and late Sharifudin Pirzada authenticated this publically) had another horrendous story to narrate. He said Fatima Jinnah was murdered; her body had wounds with blood oozing out of them and her clothes were soaked in blood. She was laid to rest without a postmortem. Many believed in light of evidence that Fatima Jinnah was assassinated. A petition was also filed in the High Court in this regard. But to no avail. The formula (minus-one) had succeeded again; Apnay Aala Aadmi Ko Qatl Kernay Ka Rawaj continued.

The next candidates for the Formula were Shiekh Mujeebur Rehman and Zulfiqar Ali Bhutto. Both were the most popular political leaders in the country as the results of the first general elections in Pakistan had confirmed. Mujeebur Rehman’s Awami League had swept the polls in East Pakistan, while Bhutto’s Pakistan People emerged victorious in the western wing. First, it was Mujeeb’s turn.

Mujeeb’s landslide victory in the elections had established him as the most loved leader of the country. His ‘minus-one’ was fraught with the danger of disintegration of the country. The risk was taken. Mujeeb was arrested in March 1971, after his electoral triumph, and was flown into West Pakistan to be tried for his crimes against Pakistan. For the next nine months, East Pakistan was given a bloodbath, while Mujeeb was kept in prison and the world knew nothing about his whereabouts. Finally, the minus-one formula won. Mujeeb was gotten rid of, as he was a little too popular among the masses to be spared. The cost of this minus-one was rather steep — the dismemberment of Pakistan.

Zulfiqar Ali Bhutto was the next. He truly deserved the minus-one as he was the most popular political leader of the new, abbreviated Pakistan. Despite his numerous failures during his five and a half years rule, he remained taller than his political adversaries. His popularity was his cardinal sin. On 5th July 1977, five and a half years after the dismemberment of the country, yet another martial law was imposed on the country, abrogating the consensus constitution of 1973. Bhutto was imprisoned and later charged with the murder of a political opponent. The Supreme Court of Pakistan ordered Bhutto’s execution in the murder trial, a decision later termed a ‘judicial murder’ by the legal fraternity. The minus-one, however, was achieved. He was used against Mujeeb and finally discarded.

The price of this minus one was not paltry either. The military action in Sindh during the Movement for the Restoration of Democracy catalyzed a sense of alienation in the province, and the federation was further weakened. The passion for the Formula, like always, had been so strong that this anticipated fall out of Bhutto’s execution was accepted perhaps as a quid pro quo. The entire structure of the state and the fabric of society, in fact, suffered cracks during the 11 years of Ziaul Haq’s rule. The minus-one doesn’t come easy as Pakistan is still struggling to repair the damage of the Zia era. Most of Pakistan’s failures as a state emanate from the womb of this atrocious Formula.

The day first party-based polls, after a hiatus of 11 years, were held in the country in 1988, Bhutto’s daughter, Benazir Bhutto returned to power – so much for the efficacy of Formula. Benazir, despite knowing that she was the next most suitable candidate for the Formula, could not dissuade herself from following the path of her father. Jail and exile failed to discourage her. Even her unenviable government stints could not push her into political oblivion. She remained popular, hence, unacceptable to the powerful. Finally, in December 2007, she was eliminated. The Formula devoured another popular politician who had refused to toe the line.

Then it was, deservedly, Nawaz Sharif’s turn. Till 1993, it was unthinkable that one day Sharif would revolt against his own makers and qualify to be a victim of the formula. But then he surprised many by refusing to take dictation any longer. That day onward, he has been a continuous prey of the formula. Jail, exile, humiliation, he has suffered it all but refuses to budge.

Examples of minus one are many, from Altaf Hussain (once own boy of power corridors) to Akbar Bugti (one of the patriate voice among sardars), if the provincial politicians are also included in the list. But let’s stick to the national level for the dearth of space.

Next? Who deserves it the most? Imran Khan has a huge following; he is the leader of one of the two most popular political parties in the country; he is the incumbent prime minister. None of his predecessors with these characteristics could dodge the Formula. Would he continue to toe the line to evade the destiny all popular political leaders met before him?

No matter how hard he tries, Imran Khan is no Shaukat Aziz. Already, Khan seems to have differences with his ‘mentors’ on Nawaz Sharif’s return, and Punjab CM Buzdar’s future. A new chapter will be written in Pakistan’s political history if Imran Khan escapes The Formula.

Presently, there is no move to replace Imran Khan, but the trends in Pakistan’s political history show that the situation may develop to minus Imran Khan after the next Senate Elections, scheduled to be held in March 2021.