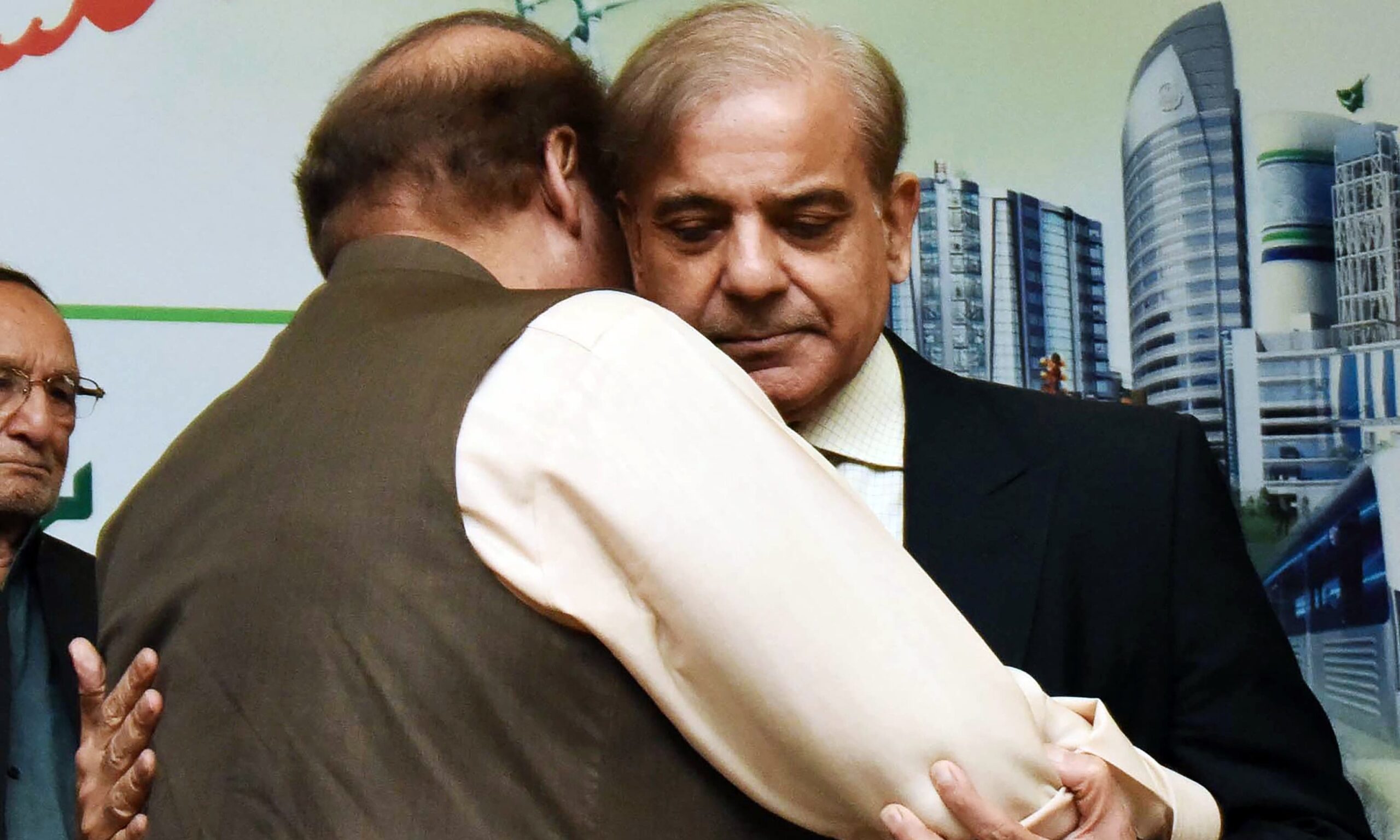 The much-hyped opposition’s All Parties Conference (APC) in Islamabad on September 20 was overshadowed by the Mujhe Kyun Nikala, Part 2, series speech of deposed prime minister Nawaz Sharif and the political storm caused by one after the other disclosures about secret contacts of the opposition parties with the military topmen.

The aggressive speech of the PML-N’s supremo in which he took the establishment head-on has put, on the test, the whole opposition, especially his own party who is not ready to resign from parliament or stage protest on the streets. The majority of PML-N leaders do not want to see their leadership pursuing an aggressive anti-Establishment policy and are hopeful that the younger Sharif, with the help of his contacts in the establishment and his past relations will one day manage to find some reprieve for the party that has been facing repression since the PTI came into power in August 2018.

Some in the PML-N believe that it was out of despair that NS had finally burst out after getting no respite and positive signals from the concerned quarters despite showing complete restraint, keeping the Vote Ko Izzat Do slogan abandoned for over three years, and fully cooperating with the government inside the parliament over key legislation.

However, the anti-Establishment image which the PML-N supremo had once again tried to build for his party, came down crumbling within 24 hours of his hard-hitting and aggressive speech at the APC via a video link from London when Railways Minister Sheikh Rashid Ahmed disclosed the very next day that the key opposition figures, including Shahbaz Sharif and Bilawal Bhutto Zardari, had met Army Chief Gen Qamar Javed Bajwa and spymaster Lt-Gen Faiz Hameed just days before the APC. The PML-N was then found to be on the back foot when a military spokesman revealed that its senior member and former Sindh governor Muhammad Zubair ( close to Maryam Nawaz Team) had already twice reached out to the Army Chief to discuss the legal and political cases of Mr Sharif and his daughter Maryam Nawaz.

It all happened at a time when the political experts and TV anchors were still analyzing Mr. Sharif’s speech and they had not even discussed the country’s future political scenario in the light of the 26-point APC declaration and the likely fate of the newly-formed opposition’s alliance with Pakistan Democratic Movement (PDM) aimed at ousting the present two-year-old PTI regime through a three-phased agitation plan. In meeting with COAS, the opposition members, reportedly, wailed about the NAB role.

The PML-N leaders initially argued that they had gone there to discuss the issue of national importance and the meeting could not be termed secret as leaders of other political parties were also present in it. But the party did not find any immediate response to the revelation by DG ISPR Maj-Gen Babar Iftikhar that PML-N’s Muhammad Zubair twice met the army chief, once in the last week of August and then on September 7 in the presence of the DG ISI and that both the meetings were held on Mr. Zubair’s request. The PML-N leaders preferred to keep mum over the development and left it entirely on Mr Zubair to fend for himself.

Maj-Gen Babar said the COAS made it clear to Mr. Zubair that the legal cases being faced by Sharifs would be decided by courts and political matters were to be dealt with the parliament. According to him, the PML-N leader was advised by the COAS to keep the army out of political matters.

A visibly perturbed and under-pressure Zubair was later seen on different TV screens giving explanations, stating that Gen Bajwa was an old friend and their families had cordial relations. He, however, admitted that in these meetings, Nawaz Sharif and Maryam Nawaz came under discussion, but said he had not sought any relief for them.

In one of its reports about these secret meetings, Daily Dawn quoted an unidentified senior PML-N parliamentarian as saying that he wasn’t surprised at all to hear about the party leadership’s “backchannel contacts” with the military establishment. He also agreed with the perception that Nawaz Sharif’s scathing remarks about the army at the APC could be a result of the impression he got from the contacts that there was no flexibility on the other side. He further said it was an open secret that the party supremo’s departure for London had been facilitated.

Amid criticism on his party over secret contacts with the establishment and in an apparent damage control move, Nawaz Sharif has now directed his party members not to hold meetings with the military representatives without prior permission of the party leadership. It is yet to be seen as to how he will ensure the implementation of his directives while sitting abroad.

Of course, all these happenings must be shocking for the few optimist democrats living in this country, but for a majority it was not for the first time that the effort of the deposed prime minister to portray himself as a transformed and visionary statesman has failed.

In the past, the PML-N many a time remained successful in making a sizeable population believe that the party leadership had learnt from its past mistakes, but each time the people later realized that actually it was their mistake to think so.

After the 1999 coup first signs of transformation in Nawaz Sharif were witnessed as this was for the first time that not only the Sharifs but the PML-N leaders and activists, had to face state brutalities and jail miseries. Then one fine morning, the nation came to know that the Sharif family had left the country for Saudi Arabia under a deal at a time when many diehard party workers and leaders were either still behind the bars or had been facing the wrath of the Musharraf Regime. The claim of the Sharifs that they had not signed any accord to stay away from politics for 10 years was also proved to be false when the then PML-Q government released the copy of the agreement brokered by some Arab personalities.

Then came 2006, the year when two arch-rivals of the past Nawaz Sharif and Benazir Bhutto signed the historic 36-point Charter of Democracy (CoD) in London with an emphasis on restoration of the 1973 Constitution in its original form through constitutional amendments and agreeing on a new political code of conduct for themselves. The two parties-PPP and PML-N had vowed to make all secret and security agencies accountable to elected governments and to replace NAB with a powerful accountability commission.

It has been written in the CoD that

“the military dictatorship and the nation cannot co-exist – as military involvement adversely affects the economy and the democratic institutions as well as the defence capabilities, and the integrity of the country – the nation needs a new direction different from a militaristic and regimental approach of the Bonapartist regimes, as the current one”.

And this is what Mr. Sharif was exactly telling the nation on Sept 20 after 14 years.

The two parties had also vowed to refrain from seeking the establishment’s help in their efforts to destabilize each other’s government. But the nation saw as to how Mr. Sharif sought intervention of the military during the movement for the restoration of the judges and taking the memo scam, involving former ambassador to US Hussain Haqqani to the Supreme Court.

It was also the PML-N which committed the first violation of the CoD when at the time of the passage of the 18th Amendment, it opposed the amendment suggesting that the judges of the superior judiciary shall be appointed through a commission headed by the Chief Justice of Pakistan “who has never previously taken oath under the PCO (Provisional Constitutional Order).

In his Sept 20 speech, while referring to the 2016 Dawn Leaks, Mr. Sharif said a joint investigation team (JIT) comprising officials of secret agencies was constituted, but it failed to prove the charge. Can Mr. Sharif tell as to who had constituted the JIT when he was the country’s prime minister? Does he have a reply as to why he sacked his information minister over Dawn Leaks? Can he explain why he removed one of the ministers for talking about the role of the establishment in the 2014 PTI sit-in while giving an interview to the BBC?

No doubt that returning to the country with his daughter, few days before the 2018 elections leaving his ailing wife on the death bed in London knowing that he would land directly in jail was his most stunning and courageous act which, according to some political experts, also helped his party winning more than the expected seats in the polls. However, at a time when his presence in the jail simply could have caused some difficulties for the ruling PTI, he somehow managed to get relief from the courts which allowed him to go abroad on medical grounds despite the fact that he was undergoing a jail sentence.

Most of the opposition leaders belonging to the other parties and even in the PML-N believe that it is time for Mr. Sharif to return to the country if he really wants to see the newly-formed PDM running a successful anti-government campaign. It is up to Mr. Sharif now to decide whether he wants to run the party through a remote control like MQM’s Altaf Hussain or he prefers to return to the country to lead the campaign, which he could do even sitting in the jail.