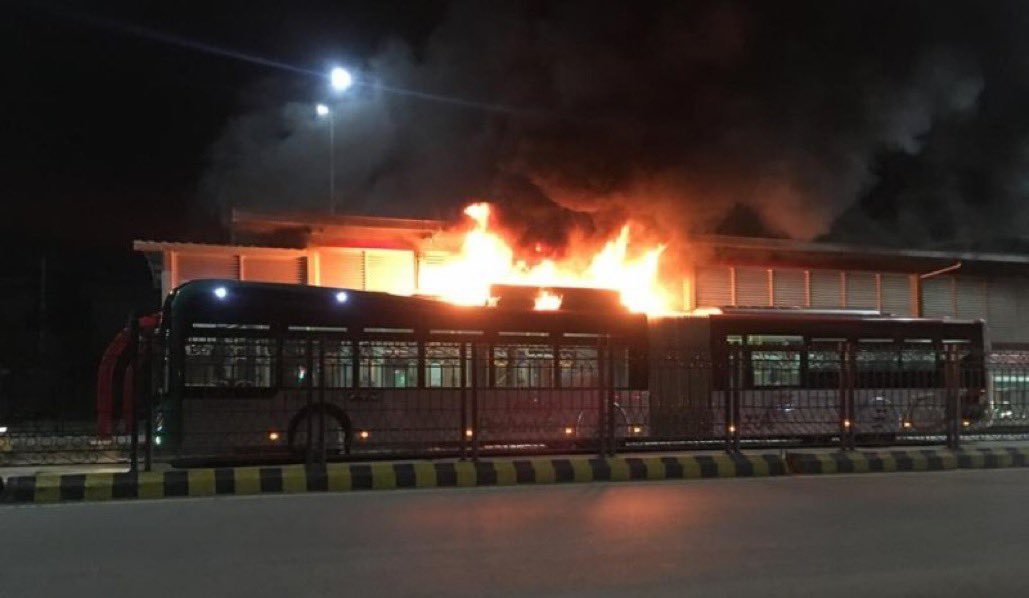 Operation of the long-awaited and much-trumpeted project of the Pakistan Tehreek-i-Insaf (PTI) government—Rapid Bus Transit (BRT) — came to a grinding halt exactly on the 35th day of its opening.

None other than Prime Minister Imran Khan inaugurated the project on August 13, declaring it the best among all the metro bus projects in the country.

Nevertheless, the administration of the project — TransPeshawar — had to stop the service on September 16 sine die after the fourth incident of fire in the BRT buses.

TransPeshawar’s spokesman Muhammad Umair Khan said that the service would be resumed after a through check-up by the manufacturer company.

The stoppage of the bus service added insult to the injury because the project remained a constant source of embarrassment for the PTI government right from its very inception.

For instance, even announcement of the project drew flak from the opponents of the PTI. Earlier, Imran Khan had explicitly opposed such projects and would sarcastically call them ‘jangla bus’.

The stipulated time for the completion of the project was six months, but it took the PTI government 34 months to open the bus service. It merits a mention here that the project is still incomplete and may take a few more years to be fully completed.

The incomplete portions of the project include: cycle track, parking spaces and commercial plazas. Besides, out of the three depots only one could be completed hitherto.

According to the official statistics presented in the provincial legislature, the initial cost of the project was 49.346 billion rupees which later jumped to Rs. 66.346 billion and its present cost has touched the figure of Rs. 71 billion.

The cost escalation is linked with the frequent changes in the design of the project. As many as 37 major changes were made in the design.

Interestingly enough, the provincial government paid a huge amount of Rs. 1.253 billion for the detailed engineering design. However, the design failed to assess that the bus track at Gul Bahar and Tehkal would lead to massive traffic jams and the construction work on these two points was demolished to replace the grade-level track to flyovers.

The cost of the project registered around a 35% increase, but on the other side, the number of buses decreased from 300 to 220 to ply on the 27.5-kilometer bus corridor and seven feeder routes. The government borrowed $471 million from the Asian Development Bank. The provincial government, as per a news report, would have to pay Rs. 15 billion to the ADP as mark-up for this 20-year loan. Later, the government borrowed another $122 million from a French bank. The provincial government’s share in this project was Rs. 7.465 billion which was later raised to Rs.13.117 billion.

Khyber Pakhtunkhwa Minister for Transport Shah Muhammad says that the project would not need any subsidy if the daily flow of passenger ranges from 0.35 million to 0.4 million. Otherwise, the provincial government would have to pump in extra money to grease the wheels of this bus service.

The provincial government, though, boasts that it would be a non-subsidized project, but the Auditor General of Pakistan report discloses that the project needs an annual subsidy of Rs. 1.6 billion.

The PTI government, a self-proclaimed harbinger of corrup- tion-free Pakistan, has to stop the process of its inquiries more than once.

Hearing a petition filed by a local leader of Jamiat Ulema-i-Islam(F) Amanullah Haqqani on July 19, 2018, Peshawar High Court Chief Justice Waqar Ahmed Seth declared the BRT project “shady and shaky”. He directed the National Accountability Bureau (NAB) to delve into the project and submit a detailed report within 48 days.

However, the PTI government succeeded to stop the investigation by getting a stay order from a bench of the Supreme Court, presided over by then Chief Justice Mian Saqib Nisar.

“Per kilometer cost of the BRT is Rs. 2.427 billion, which is exorbitantly high,” the verdict further stated.

This time, the PHC chief justice ordered the Federal Investigation Agency (FIA) to probe into the matter and submit its report to the PHC within 45 days.

But instead of getting itself absolved of the allegations regarding anomalies in BRT, the PTI again challenged the PHC verdict before the court, which also restricted the FIA from holding any investigation into the project.

The PTI government emerged successfully to get the orders from the Supreme Court to stop investigations in the BRT project, but probably it remained oblivious to the investigations of the Provincial Inspection Team.

On April 01, 2019, the Provincial Inspection Team, in its report submitted to the chief minister, pointed towards the kickbacks of Rs. 7 billion in the project. The report further stated that the BRT project was started without any comprehensive plan, which led to huge cost-escalation.

The Auditor General of Pakistan’s report issued in February further substantiated the findings of the Provincial Inspection Team. It stated that the Rs. 10.4 were wasted on “unauthorized variations.”

The report also figured out the payment of Rs. 95 million as salaries without approved pay structure and another Rs. 45 million “unauthorized payment” to officers.