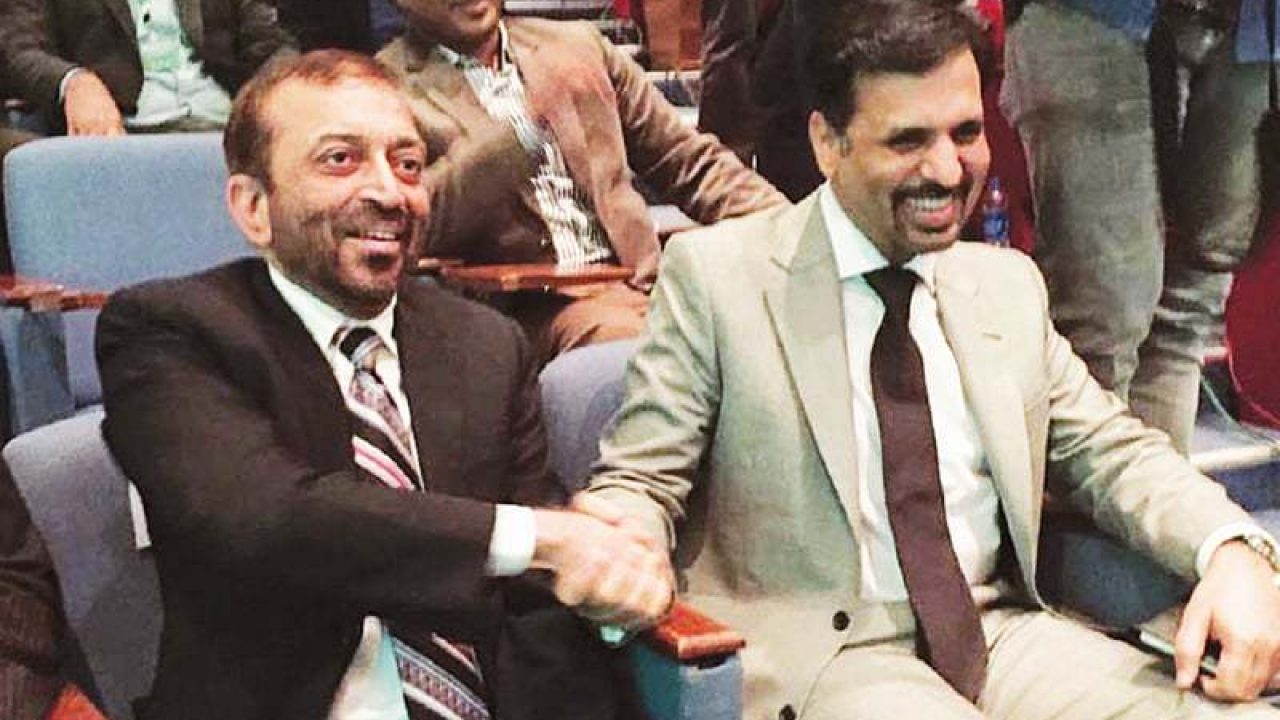 Inexplicable as it may sound, Karachi, a bustling metropolis of around 25 million people, lacks a political voice in its own affairs. It has been a theatre of grotesque political experimentation for the last four decades.

The state took a backseat and the city became a breeding ground for mafias and gunrunners. A bunch of opportunists clad in political attire was given free rein to engage in all kinds of gimmickry – and they took the multitudes of educated Karachiites for a ride. Political representation – and thus politically guided civic development – became myths in this era.

But all that changed at the drop of a hat on 22 August 2016. A demigod who commanded millions, the Mohajir heavyweight Altaf Hussain instantly turned into a pariah nobody wishes to associate with. He overstepped the fine line between criticism and treason – and he became history.

Today, he is a spent force. His legacy will always be remembered for its plethora of missed opportunities. He overshot himself and crossed swords with his own creators. He is now a footnote to a tale that will remain forever unfinished.

This turn of events has left Karachi’s 20 million Urdu-speaking people embarrassed and baffled as their promised sense of identity and pride has slipped from their fingers.

MQM’s end was as convenient as its origins were mysterious. Along the way, it morphed from Mohajir Qaumi Movement to Muttahida Qaumi Movement. But MQM, the political party primarily of Urdu-speaking people whose starry-eyed ancestors had migrated from India, had to bite the dust as the state moved in to assert its writ.

The party’s critics call its rule of the city an era of the unparalleled reign of terror. The grassroots movement that began in the 1980s with the seductive slogan of empowering the downtrodden Urdu-speaking populace soon turned into a mafia-style cabal.

The three main promises that had catapulted MQM to power were outlawing the quota system, working for the glory of the city, and crafting a new sense of belonging with fellow Pakistanis. None of them were realized.

Looking back, it is easy to see how Karachi struggled in the clutches of fascism. Mohajir-Pakhtun riots in 1985-87 and again in 2009-10 as well as simmering Mohajir-Sindhi fissures betrayed the dark nature of MQM’s rule. As it turned out, it was all to allow a coterie of people to amass enormous wealth and clout while the citizenry waited for the realization of their dreams.

But there was no dearth of saner elements in the MQM. From Akhtar Rizvi, Raees Amrohvi (the legendary poet), Kunwar Khalid Younis, Farooq Sattar (the first Mayor of MQM) to countless selfless souls, the party was a great collection of social activists, thinkers, poets, artists, public servants, and academics who stood for nurturing the people’s sense of belonging to Pakistan and subordinate their cherished new identity to it. They did all within their power to breathe life into this new identity. But the cold fact remains that the party revolved around the toxic personality cult of its fallen leader.

Although the MQM successfully emerged as an indispensable third political force in the country, its methods and machinations were always questionable. The party leadership tapped into mob psychology to command and mobilize street power, becoming the very antithesis of its intellectual origins. The saner voices in the party were soon side-lined and chauvinists had things their way.

Karachiites have a lot to regret about the failure of MQM. Perhaps the greatest loss of all is that there will never be a reckoning for a generation of Karachiites consumed by the flames of ethnic unrest, arson, extortion, and targeted killings. The state is silent and the perpetrators go scot-free.

To be fair, the blame for the unending spree of killings from the 1980s until the army-led operation of Radd-ul-Fasad that cleansed Karachi of its underworld and terror nexus does not belong to the MQM alone. All political and sectarian parties played their due role in wreaking this devastation.

The MQM, nonetheless, remains a latent political force for the simple reason that 20 million Urdu-speaking people still long to identify themselves with a party, or any party, which can cement their claim to their lost identity.

Wedded to its Sindhi-speaking, rural power base, the PPP (Pakistan Peoples Party) is unlikely to make any inroads on the Urdu-speaking urban support base of MQM. In fact, its embrace of a narrow Sindhi identity was instrumental in the rise of the ‘Mohajir’ identity in the first place.

The Jamaat-e-Islami and its distinctive brand of religious politics have never been popular with Karachiites, although the Jamaat did give Karachi one of its best Mayors: Abdus Sattar Afghani – the man who relentlessly worked for a proactive local government.

The Pakhtuns were always a divided force. They were seen as ‘encroachers’ by hard-core MQM ideologues, which ushered in an era of ethnic tensions in Karachi. With the settling in of millions of Afghans in Karachi – thanks to the myopic domestic policy attendant to our Afghan policy, Karachi exploded as a bastion of gunrunning and drug and human trafficking.

Today there are at least four splinter factions of MQM – each more confused than the other. None has the broad acceptability the MQM enjoyed in its heyday, and all find themselves tainted with allegations as former party comrades engage in a blame game. Two of these – the PIB-faction of Farooq Sattar and Bahadurabad-group of Khalid Maqbool Siddiqui – hark back to the early days of MQM.

The MQM-Pakistan is the new name given to the erstwhile MQM minus Altaf Hussain and his London-based coterie. This faction that enjoys representation in the parliament and is an ally of Prime Minister Imran Khan, is irked with all other factions, and terms them as ‘men in cahoots with the establishment’.

MQM-P convener Khalid Maqbool Siddiqui has conveniently dislodged Dr. Farooq Sattar, who was listed as MQM leader on party registration with the Election Commission. Siddiqi now sits at the pinnacle of MQM power politics and is busy rewriting the priorities of a party that once ruled the roost.

Another of Karachi’s former mayors, Syed Mustafa Kamal heads his own faction of MQM styled Pak Sarzameen Party. He was once hugely popular in Karachi as he ushered in innovative civic developmental schemes.

Since his return from self-exile in Dubai, Kamal is testing the rough tides of city politics, hoping to bag the lion’s share of the MQM vote bank. But he too is blamed by the MQM-P for striking a deal with the powers-that-be.

The MQM’s story will not be complete without a mention of MQM-Haqiqi of Afaq Ahmed. In fact, it was the true opposition to the party from the inside – and was responsible for the first military operation against the party in Karachi as well as for denting the mythical aura of Altaf Hussain’s personality cult.

A difficult nut to crack, Afaq Ahmed is tight-lipped these days, but he has always been a dark horse of sorts. His following – traditionally silent but ready to stand up and be counted at ballot time – may still be substantial. To write him off would, therefore, be a grave mistake.

Last but not least is the Washington-based former MQM convener, Nadeem Nusrat – who once called the shots from London. On and off, he makes public his plans for reorganizing the ‘Mohajir’ vote bank. But he has proven a non-starter to this day.

So much so for the MQM, which has lost its clout in Karachi – a city it once used to electorally sweep with no eyebrows raised. Prime Minister Imran Khan’s PTI (Pakistan Tehrik-e-Insaf) has moved in rapidly to fill the void. In the 2018 general election, the PTI won thirteen out of Karachi’s twenty-one National Assembly seats. Although it suffered a major setback, nobody was surprised when MQM still secured a face-saving six seats.

Karachi went the PTI way not because of love for Imran Khan or the PTI’s popularity, but because the citizens were sick of MQM and desperately wanted a change. Imran Khan’s doctrine to change the modus operandi of governance resonated with the Karachiites, and they were generous enough to hand a stunning win to the PTI.

That the PTI is still struggling to make its presence felt in the world’s seventh-largest city and its elected legislators cut a sorry figure in the process is a story for another day.

The PTI was generous to name MNA-elect from Karachi, Dr. Arif Alvi, as the head of state, apart from doling out a gigantic bail-out plan of development to the tune of PKR 1.1 trillion to address the chronic municipal and infrastructure issues of Karachi.

Yet the city is in doldrums as competing interest groups squabble for a share of booty and political leverage. The realization that Karachi faces a crisis of ownership crisis seems lacking, as none of the quibbling factions has risen to the occasion.

The cosmopolitan city – a major hub for foreign immigrants, especially from India, Bangladesh, and Burma – is equally threatened with a waning ecosystem. Water has become an expensive and rare commodity, electricity is costly, and the infrastructure is paralyzed at the hands of a jaundiced supply system. On top of all these ills, Karachi is perhaps the only city in the world with no public transport.

Waseem Akhtar, MQM’s outgoing Mayor, has admitted he has only 12 percent administrative control of the city, and his administration remains hobbled by a severe lack of funds. This is all about a city that generates almost 70 percent of the nation’s revenue.

The resource distribution system is managed through an upside-down funnel with the provincial government and the Cantonments running the show at the expense of Karachiites’ needs and aspirations. The system seems to have been designed to ensure the pilferage of funds and misappropriation.

Presently, Karachi has three major political players: a rampaging PTI, a lame-duck MQM, and an inefficacious PPP. Karachiites are on a honeymoon with PM Khan and his men. If they succeed in delivering the basic amenities of life and resurrecting the city infrastructure, they certainly stand a fair chance of taking Karachi by storm.

The PPP has never been a serious contender in Karachi politics, its support limited to its restive vote bank in the peripheries of the city. The presence of Jamaat and other religious and sectarian outfits is merely symbolic.

That leaves us with a born-again MQM: A party rising from the rubble of the erstwhile MQM, espousing its just and politically significant causes, but free of any association with Altaf Hussain’s toxic leadership.

Such a party could well unite the splintered Mohajir vote bank because Karachiites still long for a sense of belonging and an identity all their own. The fires stoking MQM’s stellar rise the first time around are far from spent.

Karachiites still need a shoulder on which to cry, an ear in which to whisper their ordeals of the last seven decades. For better or for worse, a born-again MQM still fits the bill better than any other party – including PM Khan’s PTI.