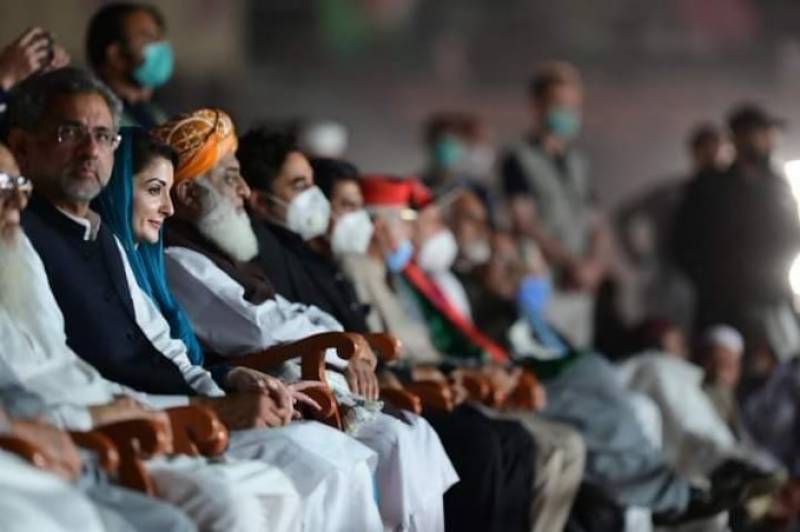 For the past few weeks, the country has been abuzz with the talks about backdoor contacts between the establishment and the opposition parties and the need for a grand national dialogue. Although such developments cannot by definition be officially confirmed, some recent happenings analysed against the backdrop of the country’s chequered political history give credence to this perception.

Vice-President of the Pakistan Muslim League-N (PML-N) Maryam Nawaz, who has become the de-facto head of the party after the arrest of party president Shahbaz Sharif in September last year, has been claiming that “her party people and the PDM (Pakistan Democratic Movement) have been approached”.

Leaders of the other opposition Pakistan Peoples Party (PPP) are also confirming such “contacts” in their private conversations and some say that Senator Mustafa Nawaz Khokhar has resigned from the position of the official spokesperson for party chairman Bilawal Bhutto-Zardari also because of the ambiguous party policy in this regard.

Moreover, the meetings of Pakistan Muslim League-Functional (PML-F) Secretary General Muhammad Ali Durrani with Shahbaz Sharif at Kot Lakhpat Jail and with Pakistan Democratic Move- ment (PDM) President Maulana Fazlur Rehman and then another meeting between the Maulana and Abdullah Gul, the son of former ISI chief Gen (retired) Hameed Gul, in Rawalpindi are being cited as evidence by those asserting that the opposition parties have finally been approached and a way out of the current impasse is being discussed.

In their meetings, the two pro-establishment men have reportedly asked the PDM leaders not to make the country’s state institutions controversial by dragging them into politics as, according to them, not only will such an effort be detrimental to the institutions, it can also endanger whatever fragile democracy we have in the country.

Durrani is presently in the PML-F which is an ally of the ruling Pakistan Tehreek-i-Insaf (PTI) and like many other such charac- ters in the country, the establishment is known to be his only constituency.

The PML-F leader, who had served as a federal minister under military strongman Gen Pervez Musharraf, after his meetings with the opposition leaders had categorically stated that the “collision course” the PDM was going to adopt would have “serious consequences”.

In a TV interview, Durrani later said some “unfelt characters” were working behind the scene to broker peace between the government and the opposition parties. He didn’t reveal the identi- ties of the characters, but said these could be from the establish- ment or judiciary or even from the agencies.

Durrani claims that he met the incarcerated Shahbaz Sharif to deliver an important message from his party leader Pir Sibghatullah Rashidi. He has reportedly asked the younger Sharif to play his role in stopping the opposition lawmakers from resigning from the assemblies, warning that a collision course could result in the wrapping up of the democratic system.

“The beauty of this [dialogue] is that it is not exposed [to the public] but its results will be exposed. The current situation demands immediate start of ‘track-II’ dialogue.”

“A grand dialogue will be better for the establishment, the govern- ment and the opposition. However, it will be wrong to push anyone to the wall in the name of accountability. If opposition leaders are arrested, the door for a dialogue will be closed. Leaders in the parliament must be freed”.

He quoted Shahbaz Sharif as saying he could not play any role as long he was in jail – implying the younger Sharif had in fact supported his initiative.

The media has already been reporting that Shahbaz Sharif had been advocating for a policy of reconciliation in the party, but his views had been dominated by the aggressive stance of deposed premier Nawaz Sharif and his daughter Maryam.

Before Durrani’s initiative, some members of the federal cabinet had already extended the dialogue offer to the PDM, which was declined straightaway despite the fact that Shahbaz Sharif had himself once called for a national dialogue to steer the country out of the present crisis.

The rejection of the proposal came directly from PML-N’s supremo Nawaz Sharif through his newly-created account on Twitter. The former premier declared that those who brought Imran Khan to power by stealing votes were now suggesting a grand national dialogue.

“Becoming part of such a dialogue will be tantamount to stepping back from our sacred objective,” Mr Sharif had tweeted.

His daughter and political lieutenant Maryam Nawaz has expressed her annoyance over the Durrani-Shahbaz meeting, categorically declaring that the time for any dialogue was long past. She claimed the establishment had arranged this meeting without the consent of Shahbaz Sharif or the party.

The PDM leaders after their last marathon huddle at the Jati Umra estate of the Sharifs on the New Year’s Day 2021 declared that its target was not Prime Minister Imran Khan as he was a mere pawn and the real culprits were those who had imposed him on the nation.

They then announced that the PDM had chalked out a plan to hold demonstrations outside the Election Commission of Pakistan (ECP) and National Accountability Bureau (NAB) buildings.

Setting 31 Jan as the deadline for Imran Khan to resign, Maulana Fazlur Rehman threatened that if it did not happen, the PDM would announce a long march either on Islamabad or Rawalpindi.

“The target of our criticism will now be the establishment which set up a fake government. We respect the army and generals, but now they have to decide to step back and focus on their constitu- tional responsibilities,” the Maulana had said and asked why Pakistan was mentioned as an example of deep state.

When the opposition’s supporters and some analysts present the Maulana’s statement as an argument to support their claim that the opposition has in fact taken a hard-line stance by hinting at holding a long march on Rawalpindi, where the army headquarters are located, still there are a few who believe that it is perhaps an attempt by the opposition to gain attention of the real game players in the country.

It is also unclear if Mr Durrani really means business and doing all this under some “given mandate” or he has become active only to gain the attention of the media and the kingmakers ahead of the Senate elections hoping to make a re-entry to the parliament’s corridors.

Dawn’s Islamabad Resident Editor Fahd Husain in one of his weekly columns quoted a PML-N leader as claiming, “There were some initial contacts from the establishment regarding the personalised attacks from Nawaz Sharif.

“However, there was no substantive follow-up and the contacts subsequently dried up – as did prospects of the establishment distancing itself from the PTI.”

“In the world of power politics, the PDM appears to be struggling with the plot. According to the original plot, three months of public pressure and agitational momentum should have forced the government, and the establishment, to the negotiating table. If not, the long march to the capital should have done the trick.

“The establishment – bruised from incessant pressure of publicly uttered rebukes – would have agreed to some settlement that would have either led to the fall of the government in the centre, or in Punjab, or a deal advantageous to the PDM.

“At the dawn of 2021, the plot is nowhere near fruition. Instead, the political landscape looks something like this: The PDM will shelve its policy of boycotting polls, participate in the by-elections as well as the Senate elections, keep the resignations card on hold and let the events take their natural course till at least March,” writes Mr Husain in the column captioned “Plots and Plans for 2021”, and rightly so.

The writer is senior journalist.