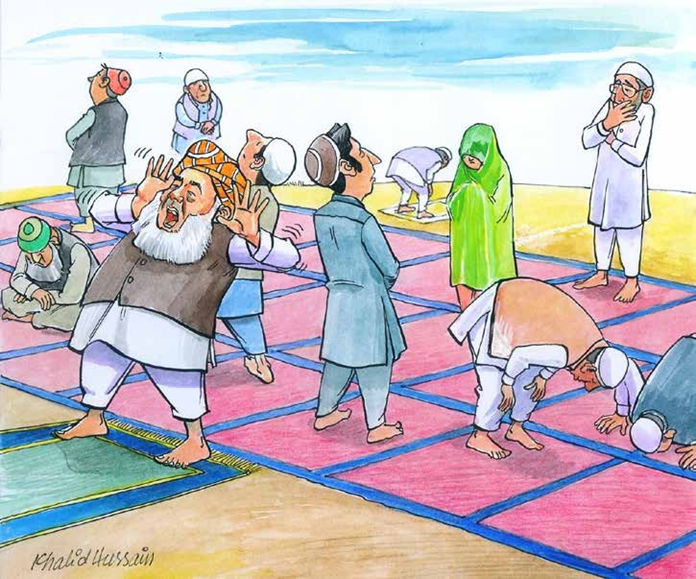 ‘To resign or not to resign’ seems to be the key question facing the opposition alliance Pakistan Democratic Movement. Strong indicators suggest, the alliance parties are divided on the issue. The government that appeared under reasonable political pressure during the first phase of the PDM movement, comprising jalsas, looks like breathing more freely now. What next? The clock is ticking. The first month of 2021 is crucial for the two sides, government and opposition. Will the PDM be able to build the momentum for the February Long March, or further suffer from the internal incoherence? If the government manages to reach the month of March sans the Long March, it will most likely ensure the completion of its 5 years’ term.

This unto itself is the success of the government that the PDM MPs’ resignations from the elected houses have become the focus of political debate. The opposition should have always known that the resignation issue was a dodgy one, and needed to stay out of the political limelight for as long as possible. It was a known fact that different components of PDM had different levels of stakes in the present political set up, and the difference of opinion was bound to surface once the issue was tabled. For instance, among the bigger political parties, Pakistan Muslim League (N) had not many stakes in the present setup while the case of Pakistan Peoples Party, well saddled in Sindh, was different. Undoubtedly, the issue proved to be a momentum breaker for the PDM, at least for the time being.

PDM was holding a few jalsas in the first phase; a strategy that was okay for starters. But there were gaps between the big jalsas, and there was not much political activity in between. When the big political meetings ended, again there was no scheduled political activity till the start of Long March in February. There were no constituency level gatherings in the entire country, no strikes, no lockdowns, no wheel-jams, no nothing. Inactivity, obviously, does not help build momentum. It was this vacuum that has helped the government wrest the initiative and play up the issue of resignations.

In the same vein, the government has approached the issue of resignations. The premier himself is daring the opposition to resign. “We will hold elections on the vacant seats,” Prime Minister Imran Khan has said more than once. No democratically elected government in our recent political history has been that hawkish in dealing with the opposition. This confidence perhaps comes when the government is on the much-touted same page with the powers-that-be, many analysts suggest.

Who has chosen the timing of the JUI internal strife to put pressure on the party chief Maulana Fazlur Rehman? Is it Hafiz Hussain Ahmed himself? Why has Maulana Shirani come out in the open to criticize Maulana Fazal, a month before the announced Long March? Is it a coincidence? Or the advantage of being on the same page with the powerful? For sure, the government itself doesn’t have the clout to orchestrate these dissensions.

Likewise, who arranged the meeting between Muhammad Ali Durrani, considered close to the mighty of the land, and Shehbaz Sharif in Jail? The government doesn’t even know Mr Durrani well, an inactive and inconsequential politician of Pakistan Functional League. Certainly, the architects of the present hybrid dispensation are making the last-ditch efforts to defuse the ongoing political tension which is bound to multiply in the coming weeks. Meanwhile, the Khan government can afford to play cool.

The government was certainly not interested in any kind of dialogue with the ‘thieves’, while the whispers from the opposition ranks kept emerging underlining the need for a grand national dialogue. Recently, the opposition has also stiffened its stance, categorically stating that it is not interested in sitting at the table with the government. In the past, in such crises, some ‘neutral’ institution intervened to make some kind of negotiations possible and played a guarantor. No More. The opposition believes there is no arbitrator left in the country whose guarantee can be accepted. Jamiatul Ulmae Islam chief Maulana Fazlur Rehman has openly alleged that he wrapped up his 2019 Azadi March on the unmistakable guarantee that the general elections will be held in the country before March 2020, but the guarantors backed out. His allegation was not answered.

This is an unprecedented situation. Rather dangerous. Politics seems to have entered a cul-de-sac. How to get out of this blind alley? Obviously, there are no readymade answers.

What are the options the opposition can think of? It doesn’t have many. The opposition actually is convinced that the present system has tried to bulldoze it; major political parties have not been allowed to play the role of an effective opposition, what to talk of running some future government; there is no room for the ‘second’ party in this hybrid dispensation. All dissenting voices, the opposition argues, have faced NAB, FIA, Anti-Corruption, FBR, ANF and so on; all ‘uncooperative’ elements have experienced jails, exiles, legal cases, threats and humiliation. The Long March seems the only option for the opposition, do or die. And the Senate elections in March has set the deadline.

It seems the Long March is inevitable. The opposition is all set to make the final effort, seriously questioning, not only the government but this ‘arrangement’. There may be some differences among the PDM parties but all are sincerely focused on one point– this government must go. The biggest supporter of the Long March, the opposition is convinced, is the government’s lacklustre performance. Inflation is a killer. There are corruption scandals galore – medicine, wheat, sugar, dollar, petrol, LNG, and many more. One minister has single-handedly grounded the national carrier. And the result of accountability drive is zilch.

If Maulana could manage a huge crowd in Islamabad last year, he could do it again on his own. This time he will also be fully supported by PML(N) and PPP. Resignations before the final countdown is another matter, but the PPP will not dither one bit if it comes to the Long March – the final shove. Unlike the Azadi March, the crowd this time may not stay confined to the designated areas. This scenario sounds unnerving.

The scare of Corona wave-II is not enough to halt the March, neither a threat alert to PDM leaders by NACTA. Some modern-day Chankia, as a last resort, may advise using raw force against the opposition and its workers. The problem with this approach is that our police force is not equipped to handle such large scale political activity. Yes, certain other law enforcing agencies have the resources to quell the ‘quasi-rebellion’. But the involvement of those agencies in such unsavoury business may unleash dangerous processes.

Sanity is a rarity?