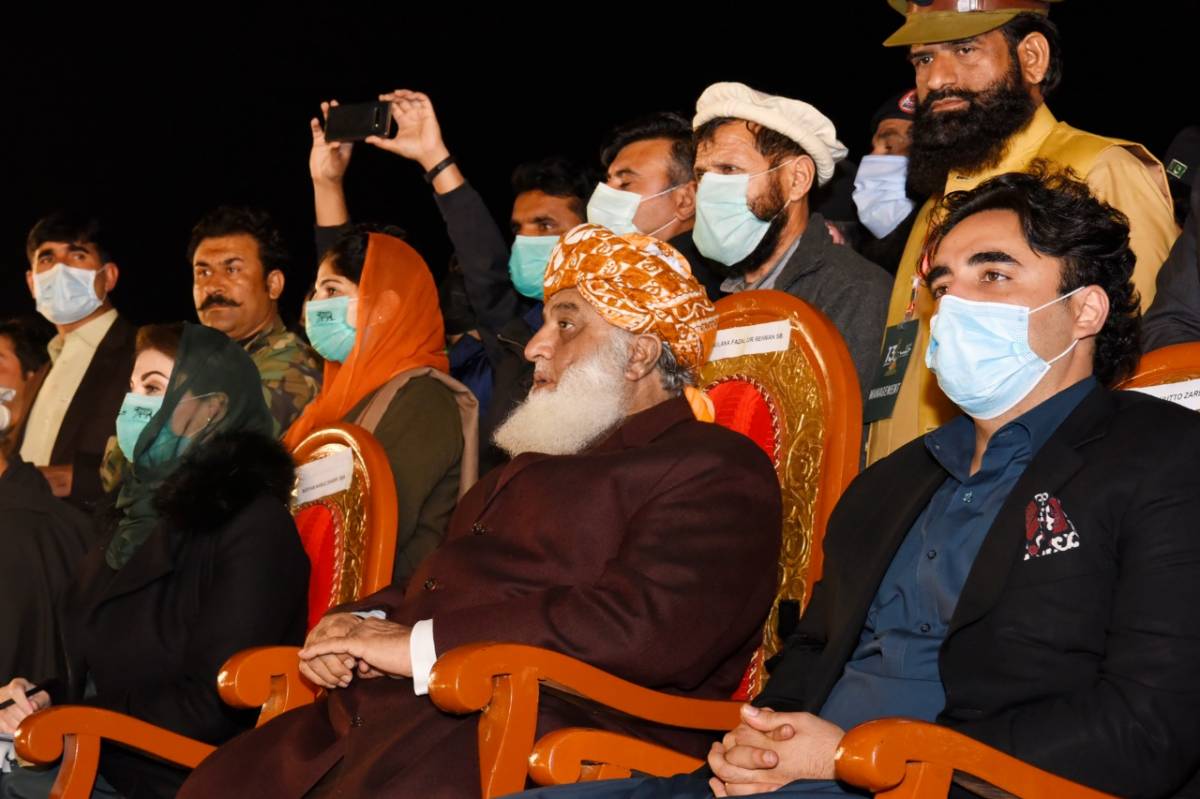 Reeling under political pressure and struggling to hold together, the 10-party opposition Pakistan Democratic Movement (PDM) has finally announced 26 March as the date for its long overdue long march as part of its anti-government campaign kicked off in October last year.

Where this long march will culminate and what will be its objectives, nobody knows even in the PDM, at least for now.

The date of the long march was announced by a visibly shaky Maulana Fazlur Rehman after presiding over a nearly six-hour meeting of the opposi- tion alliance at Islamabad on 4 Febru- ary in which the participants spent most of the time haggling over a PPP proposal to use the option of bringing a no-confidence motion against Prime Minister Imran Khan in the National Assembly.

Why the Maulana did not provide any further details of the plan while announcing the date of the long march? The answer is “he didn’t have it.” The PDM leaders now admit that they are yet to discuss and finalise their strategy and modalities of the long march which they will do after taking part in the upcoming Senate elections in the first week of March. The PPP is against the idea of converting the long march into a sit-in whereas the JUI-F and the PML-N believe that the long march will not serve the purpose on its own.

There are reports that the Maulana wanted to hold the long march on 15 March, immediately after the Senate polls, so that they could have a month time for a sit-in before start of Ramazan, but his proposal was not supported by the PPP at all.

PPP Chairman Bilawal Bhutto Zardari while speaking at a news conference in Islamabad on 6 February called it a “Mehangai March” (march against price-hike), indicating that the march was merely aimed at registering a symbolic protest against inflation and the government’s economic policies.

It was after the first phase of their anti-government campaign which failed to dent the ruling alliance that the PDM parties – which had once announced to submit en masse resigna- tions from the legislatures and hinted that they might to do it before the Senate polls – decided to jointly contest the elections to the upper house of the parliament.

Of course, the credit for this politically astute move goes to the PPP which managed to convince the hardliners within the opposition alliance that by staying away from the democratic process of election, they would provide an opportunity to the ruling alliance to attain a huge majority in the parliament which otherwise seems almost impossible.

Bilawal made a point of claiming credit for the PDM decision in a news confer- ence. According to him, some parties in the PDM wanted to boycott the Senate elections. However, the PPP convinced them not to do this on the basis of its own experiences of boycot- ting the non-party-based general election held under the military rule of Gen Ziaul Haq in 1985.

The young PPP chairman, who was not even born at that time, told the senior and veteran politicians like Maulana Fazlur Rehman, Mehmood Achakzai, and Aftab Sherpao that it took more than 25 years for them to restore the 1973 Constitution to its original shape which had been defaced through the Eighth Amendment by the members of the 1985 parliament.

Bilawal also defended his proposal of using the no-confidence motion option, terming it the only democratic way to oust the government and completely in line with the joint declaration issued at the time of the formation of the PDM during an All Parties Conference (APC) hosted by the PPP at Islamabad in September last year.

Reportedly, the PPP has suggested moving a no confidence motion first in Punjab as a test case where it believes that the ruling coalition is in tatters. On the other hand, the opponents of the idea believe that a no-confidence motion cannot succeed without the support of the establish- ment-backed parties.

Sources with knowledge of the situation said the Maulana asked Bialwal if he had received any positive signal from the real political game setters in the country in this regard. The question offended Bilawal who in return asked the Maulana as to why after taking a hard-line position, he in his recent news conference in Peshawar stated that the opposition was against the government, and not the establishment.

The PDM leaders have agreed to defer the matter for the time being because they cannot afford the breaking up of the alliance at a time when the Senate polls are only weeks away. Moreover, the outcome of the Senate elections will also help them make up their mind whether the use of no-confidence option is viable or not.

The reported ongoing internal discussions within the PDM have not only exposed the differences in the narratives of the compo- nent parties, but have also clearly demon- strated that the PPP is in no mood to take on the establishment head-on and risk sacrificing its provincial government in Sindh.

The PML-N and the JUI-F, the two hardliners in the PDM with no stake in the present set-up, reportedly suggested to the PPP in the last meeting that they might consider the option of resigning only from the National Assembly at the time of starting their planned long march if the PPP fears any negative backlash for its government in Sindh.

When fissures are visible within the PDM ranks, the situation is not much different in the ruling alliance either. There is total unrest within the ruling alliance over the reports that the PTI leadership wants to give Senate tickets to some of the people who are considered to be persona non grata and outsiders. It is perhaps due to this fear that taking another U-turn, Prime Minister Imran Khan announced PKR 500 million development fund for each lawmaker.

Still unsure of the loyalties of its own legislators through the senate election, the PTI first brought a constitutional amendment bill seeking an open Senate vote in the National Assembly. After failing to get it through, it introduced a controversial presidential ordinance to achieve the purpose without waiting for the decision of the Supreme Court in the presidential reference filed by it in December last year seeking the court’s interpretation of Article 226 on the matter.

These hasty, confusing and desperate actions by the government clearly indicate that all is not well within the ruling alliance.

The previous Senate elections in 2018 had created an unsavoury situation for the PTI, whose members in Khyber Pakhtunkhwa Assembly appeared to have voted in a couple of candidates against the party line. It is believed that the same ruckus may be re-enacted on rather wider scale now that the PTI has substantial representation in all the provincial assemblies as well as the National Assembly.

Another explanation for the jitteriness of the PTI may be the fact that the party, which got representation in the Senate for the first time in 2015, is set to become the single largest party in the Senate after the upcoming elections. But it will certainly not be able to gain control of the upper house of parliament and it will still have to rely on its allies and opposition parties even for carrying out simple legislation.

After carrying out a careful calculation on the basis of the party position in the National Assembly and all the four provincial legislatures, which form the electoral college for the elections of the members of the upper house, the constitutional and parliamentary experts believe that if all the MPAs vote strictly in accordance with the party line during the elections, then the country is going to have a completely hung Senate as both the ruling and opposition alliances are expected to have an almost equal number of seats.

Presently, the focus of all the parties is on the upcoming Senate elections, the outcome of which will definitely have much impact on the future political scenar- io in the country.

Now when the PDM has announced a specific date for the long march, it has no choice but to hold it at all cost. The question is: Will the PDM be able to infuse new life into its anti-government campaign, which lost all steam after the December public meeting at Lahore? Failing that, the long march could well be the last major activity of the opposition parties from the platform of PDM.

The writer is a senior journalist