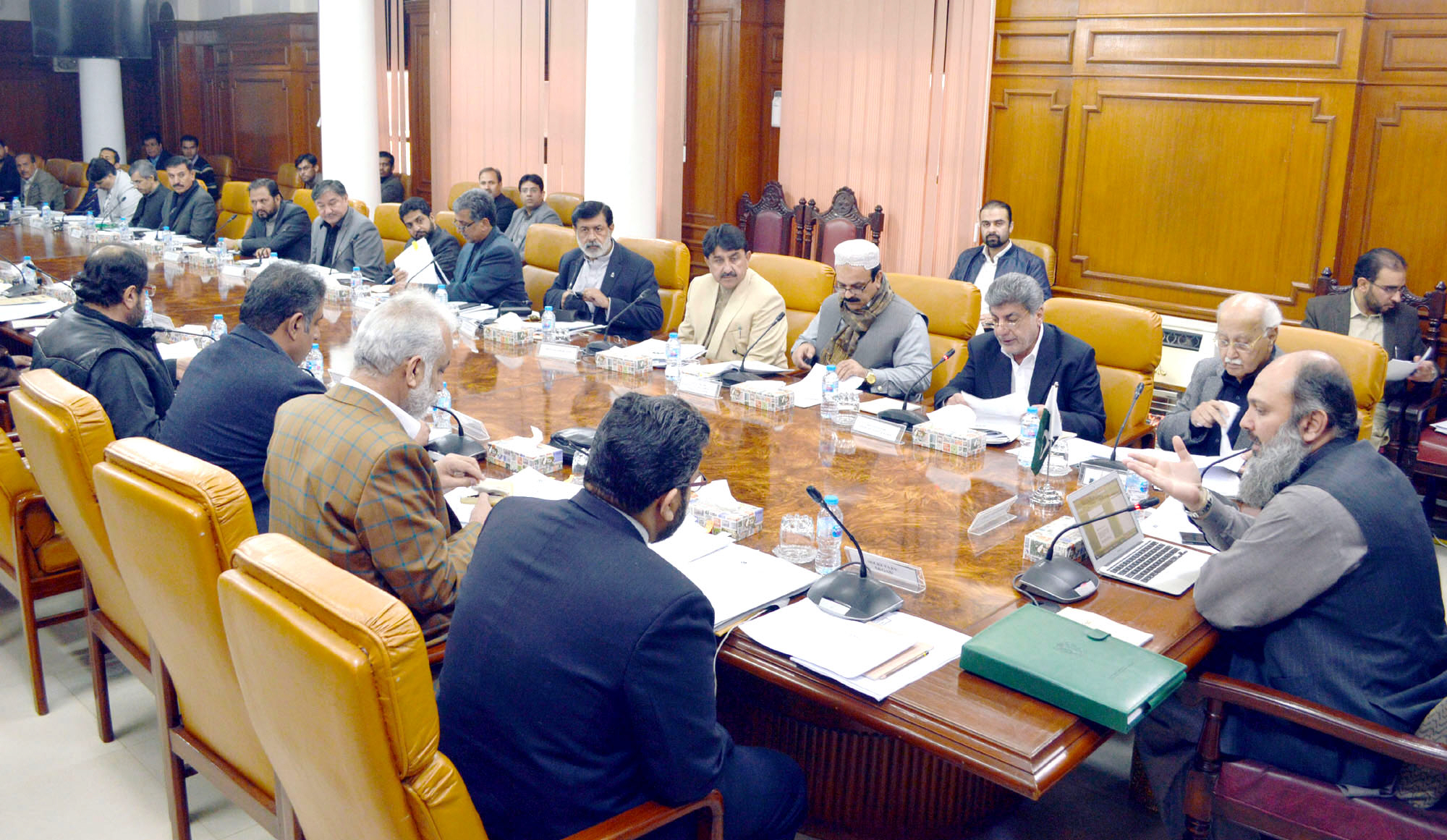 WITH THE FULL SUPPORT OF POWERFUL CIRCLES, Chief Minister Balochistan Jam  Kamal  Alyani has succeeded in clearing all hurdles his detractors within or outside his Balochistan Awami Party (BAP) created to dislodge him or squeeze favors out of him and even make the 23-member opposition in the house of 64 ineffective. Due to that solid support, his party parliamentarians and coalition partners failed to put him under pressure that rendered a strong opposition unable to create cracks in the ruling coalition for forming another government. The ruling coalition comprises newly created party BAP (24), PTI (7), ANP (4), Balochistan National Party-Awami (2), Hazara Democratic Party (2), BNP-Ehsan (1), Jamhoori Watan Party (1) while the opposition parties include JUI-F (10), BNP-Mengal (10), PMAP (1), PML-N (1) and individual (1) while one seat fell vacant due to death of JUI-F member Syed Fazal Agha.

Speaker Abdul Qudoos Bizenjo remained the chief minister for a few months after dislodging the PML-N led coalition in December 2017. Sardar Sanaullah Zehri had to step down in order to avoid a no-confidence motion moved by almost all of his party members led by Bizenjo. Bizenjo, who expected to be installed as chief minister in wake of the 2018 general elections, started running from pillar to post seeking the support of “Islamabad circles” for the top slot of the province, but in vain. Instead, these circles threw their weight behind Jam Kamal who remained state minister for petroleum in Nawaz Sharif cabinet. Bizenjo, seeing the mood of the powerful circles, had to agree on accepting speakership. In this entire political game, Chairman Senate Sadiq Sanjrani, who is a new entrant in the political arena, also used his influence for Bizenjo, but soon realized that his fruitless efforts may offend his mentors instead of securing anything good for him.

Bizenjo, keeping in view his previous experience of dislodging the most powerful Zehri, though he had done the best service for powerful circles by reducing PML-N from the sole majority parliamentary group to a single man i.e. Zehri. Although Zehri was also most loyal to powerful circles, he committed the mistake of co-hosting a public meeting for Maryam Nawaz in Quetta during the peak days of confrontation between Nawaz Sharif and the military establishment. Bizenjo doesn’t realize that he was used as a tool in the whole game, but thinks that he brought the PML-N led government down through his maneuvering instead of the role of powerful circles in ousting Zehri. He expected chief ministership for 5 years following the 2018 elections instead of the reward of a few months in top office against his service. He had to remain silent after becoming a speaker and waited for an appropriate time to make another attempt to clinch chief ministership.

After 18 months, in January 2020, Speaker Bizenjo announced that Chief Minister Jam Kamal failed to deliver the goods so an in-house change is inevitable, claiming that he enjoys the confidence of not only a majority of his party but also of the opposition. Both the BNP and JUI-F members offered their support if he could prove to have the backing of 10 members of his party or coalition partners. After this open challenge against Jam Kamal, the members of BAP as well as of the ruling coalition started gauging the situation to see whether the powers that be are behind Bizenjo’s move or the purpose is to get an inquiry against him dropped. Only a single member of the party, Sardar Sarfaraz Domki, advisor to the CM on Labor and Manpower, came to the support of Bizenjo. Domki had already tendered his resignation over the refusal by the chief minister to assign him the portfolio of fisheries and coastal development. However, Sanjrani extended his support for the move. In the wake of pressure from the powers that be, in a smart move Sanjrani suddenly announced in a late-night press conference in Islamabad to bring reconciliation between CM Jam Kamal and Speaker Bizenjo without informing the former. Sanjrani also started lobbying the powerful circles for the top post of the province after the general elections in 2023.

In fact Bizenjo thought Jam Kamal is behind the move of an inquiry ordered into the allegation of substandard work in a public scheme with an estimated cost of over Rs8 billion in his restive constituency Awaran. The military authorities had already conducted an inquiry and found leakage of money from this development project. They view that in their presence the public fund must be spent judiciously on the ground in Awaran otherwise it would bring a bad name to them instead of Bizenjo. In their direction, the provincial government, through the Chief Minister Inspection Team (CMIT), initiated an inquiry into the development project which perturbed the Speaker. Foreseeing the findings of the inquiry against him as had happened in an earlier probe by the military authorities, Bizenjo started making a hue and cry claiming that injustice is being done with him as he has been facing terrorists of Balochistan Liberation Front in Awaran but didn’t change his loyalties. His silence now indicates that the inquiry may have been dropped probably on his plea that might have convinced the powerful circles.

After tackling Bizenjo, Jam Kamal started facing pressure from other party members over development funds and postings and transfers of police and administrative officials. A group of four Pushtoon MPAs led by provincial minister Noor Mohammad Dummar claimed that Jam Kamal had done injustices with Pushtoon areas of Balochistan regarding development funds in the current fiscal year. However, later in the presence of representatives of powerful authorities, their grievances related to petty issues of the day to day affairs.

While seeing other members complaining, three members of Naseerabad Division led by Irrigation Minister Nawabzada Tariq Magsi, in a meeting with the chief minister, also got their demands of postings and transfers of officials in their districts accepted.

Sardar Saleh Bhotani, who considers himself as an alternate candidate for the chief minister slot, is known for his close relations with the powerful circles. He also tried to muster the support of his party MPAs and coalition partners by holding meetings even with opposition parties and hosting a banquet. However, he gave up his efforts when he found no support from the powerful circles. Being neighbors in Lasbela district, Jam and Bhotani had very cordial relations for decades as political allies. However, since the past few years, they have developed differences over interference in each other’s constituencies. Jam Kamal, after forming the government, didn’t want to include Bhotani in his cabinet, but the powerful circles asked him not only to include him in the list of ministers but also to allot him the lucrative portfolio of local bodies.

Another political rival Sardar Yar Mohammad Rind, the PTI’s parliamentary leader, also tried his luck seeking the support of the powerful circles as well as of his party head Prime Minister Imran Khan for chief ministership, but in vain. He was called to Islamabad by the party leadership and appointed advisor to the PM to engage him there. However, after a few months Rind returned to Quetta and the prime minister asked Jam Kamal to accommodate him in the cabinet with a good portfolio. Rind demanded planning and development, but the chief minister offered him the education portfolio, which he had to accept.

Jam Kamal has so far proved himself comparatively a good administrator within the field that the powerful circles allowed him to play on, making education, health, sports and mineral resources his priorities. He faces no imminent danger and is expected to complete his five-year term smoothly.