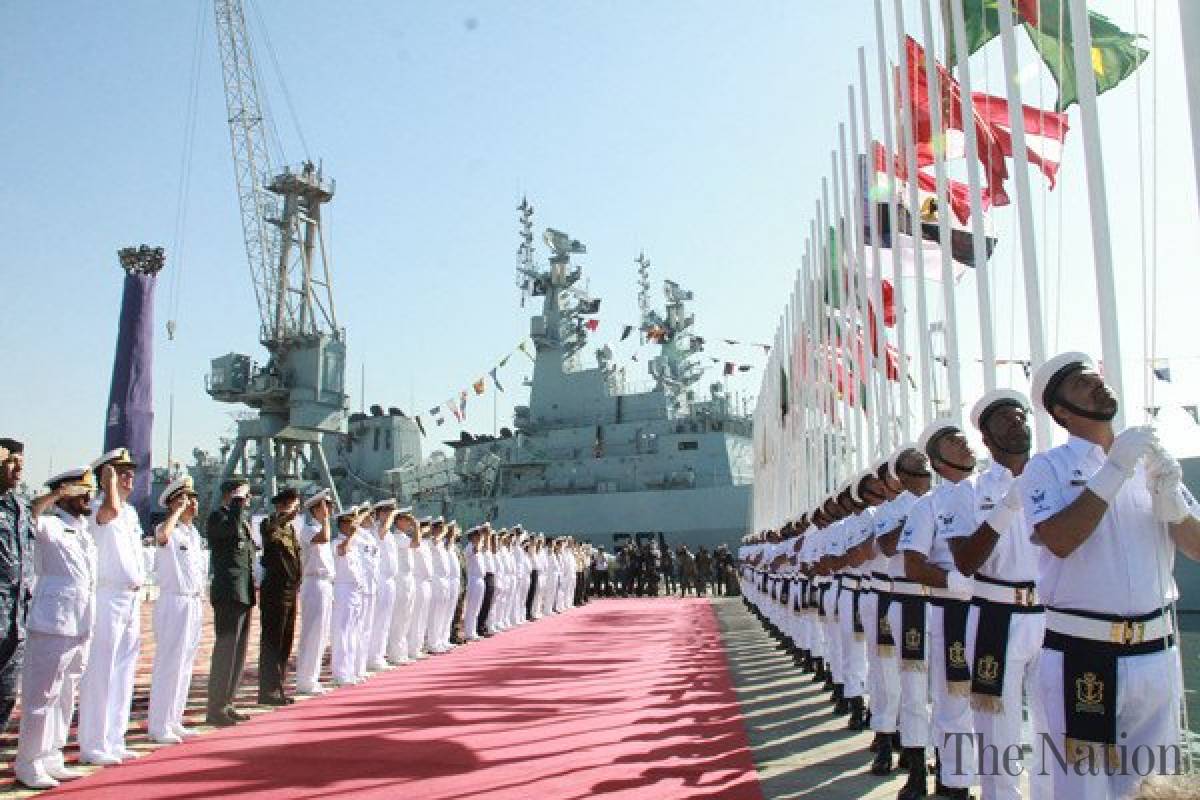 Indian Ocean is the world’s third largest ocean its geographical location and strategic waterways provide the shortest and most economical lines of communication to Atlantic and Pacific Oceans The World today is becoming more and more dependent upon the seas as up to 90 percent of the Worlds trade is ship borne Pakistan is a major littoral state of Indian Ocean Region (IOR) and world’s major energy supplies towards east and west transit through close to its coastline. In recent years, the IOR has become a stage for many Extra Regional Force in addition to regional players. In view of the same, it is paramount that peace and stability prevails over high seas particularly in IOR at all times. Pakistan Navy (PN) has always been an avid supporter of the principle of peaceful coexistence and greater regional harmony. This support has been manifested by PN efforts to contribute towards regional and extra-regional peace efforts. This include participation in United Nations (UN) mandated Combined Maritime Task Forces 150 & 151, as well as Pakistan’s own Regional Maritime Security Patrol. These are some examples of PN resolve for a secure maritime environment in the region. The seas and oceans of the World are a shared commodity. Therefore ensuring maintenance of law and order as well as safety of life at sea is the combined responsibility of all states. In pursuit of the same, PN took an initiative of conducting Multinational Naval Exercise AMAN in 2007 with the purpose of enhancing cooperation and interoperability between regional and extra regional navies. Since 2007, Exercise AMAN has become a biennial feature that has over the years drawn more and more International attention and became a recognized multinational naval exercise. During AMAN-07, a total of 28 countries participated with 14 ships and 29 observers from different countries from across the globe. Participants included regional players such as Bangladesh as well as extra regional forces like USA, UK, China and France etc subsequently; participation of such extra regional forces became a permanent feature owing to strategic interests in the region. Similarly, in AMAN-09, 24 countries participated in the exercise with 14 warships, 02 aircrafts and 09 Special Operation Forces (SOF) teams. AMAN-11 witnessed participation by 28 countries with 11 warships, 03 SOF teams and 43 observers. During AMAN-13, participation grew to 29 countries with 12 warships, 02 aircrafts, 06 SOF teams and 43 observers. During AMAN-17 the number of participants surged to 34 countries with 12 ships, SOF teams and 67 observers. Last exercise of the series, AMAN-19 saw the greatest turn out ever with participation of 46 countries with 12 warships, 02 P3C Orion aircrafts, 15 SOF teams and 113 observers. PN is committed to carry the momentum of success of previous Ex-AMAN through AMAN-21 and beyond. Overwhelming response by the international navies has proved not only PN commitment to ensuring a successful event as well as eagerness of other countries to participate in whatever capacity they can in this new yet challenging order of ongoing COVID-19 pandemic. The pandemic may pose some limitations with regards to participation due to SOPs invoked.

Ex-AMAN fulfills a wide variety of objectives. These include operational objectives such as exercising naval drills, increasing security cooperation and enhancing tactical interoperability etc. However, the said exercise affords PN an opportunity to project a positive image of Pakistan as a key player in regional peace and stability. It affirms Pakistan’s resolve of cooperation against terrorism and crimes out at sea. The Exercise also sets the stage for cultural exchange between participating countries and the host country In addition to naval drills, one of the highlights of the event is the conduct of International Maritime Conference (IMC) in tandem with AMAN. IMC is a 3 day maritime conference that features eminent speakers and delegates from across the globe. It is the arena for intellectual discourse regarding matters of current regional maritime challenges and opportunities. The conference consists of various sessions on security, maritime economy, maritime technology, maritime laws and policies and hosts of other topics related to maritime sector The international/national guest speakers’ present recommendations that may form the basis for future cooperation between the states.

The two prominent regional players in IOR are Pakistan and India. While both states adopt a policy of proportionality in most matters, there is a large discrepancy when it comes to the matter of naval exercises Pakistan hosts Exercise AMAN and India is the host of Exercise MALABAR. The scales of both exercises as well as the objectives are very different as discussed earlier, Ex-AMAN is a multilateral exercise that aims to incorporate as much regional and extra-regional participation as possible to increase cooperation and interoperability. On the other hand, Ex-MALABAR is an exclusive affair between India and big powers including USA, Japan and Australia. Maiden edition of Ex-MALABAR was conducted between India and USA in 1992. It was then a bilateral naval drill in the Indian Ocean Australia and Japan became partners later on but Australia drifted away in 2007 and Japan became a permanent member of the exercise in 2015. However Australia has returned and participated in the MALABAR naval exercise in 2020 after 13 years. This is evidence of Indian designs of creating hegemony in IOR. It is also considered that Ex-MALABAR aims to contain Chinese presence in the region and threatening Chinese development projects in various countries that fall under the umbrella of Chinese Belt and Road Initiative (BRI). It is evident from the above that India seeks a policy of competition rather than cooperation undermining the principles of peace and stability at high seas.

To conclude, synergy rather than hegemony is the way forward in the 2151 century. The world we live in today has become a global village. Cooperation and harmony are vital for progress. Militaries are crucial as deterrents and countering common threats at sea However the case of IOR is particularly peculiar in nature. As all the nuclear powers of the world have interests in the region, it has the potential to turn into a nuclear flashpoint very quickly. Therefore, cooperation is crucial in the region. India’s policy of challenging China’s progress and seeking Western aid to do so will only have adverse effects on the region and will induce instability. This would not only inhibit progress but also poses a threat to all the littoral states of IOR. In contrast, Pakistan’s’ efforts to bring maximum stakeholders of IOR together through series of AMAN exercises is a clear message that cooperation amongst states is the only way forward and maritime security and stability can be obtained through cooperation and developing interoperability with the navies of littoral states. This will go a long way in securing a better and brighter future for all stakeholders.