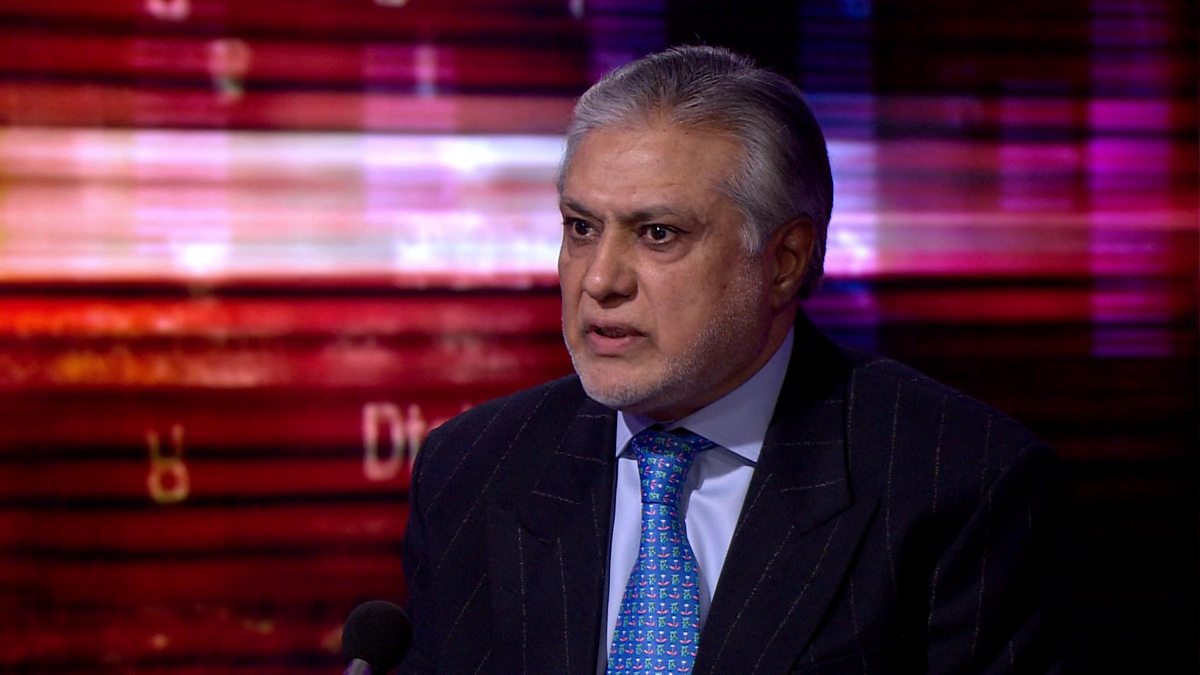 After Ishaq Dar’s recent HardTalk interview, powerful quarters within the incumbent government are deliberating whether to take a fresh look at a NAB (National Accountability Bureau) inquiry into the former finance minister’s affairs that was initiated in 2000 but closed in 2016.

The NAB initiated a probe against Ishaq Dar in 2000 on the charges of misuse of authority and assets beyond means including PKR 23 million-plus GBP 3.488 million-plus USD 1.250 million.

Keeping the importance of the inquiry above the then ‘norm of the day’ routine, the inquiry was initiated on a source report and instead of opting for a process of converting complaint into inquiry, the complaint was directly authorized to be converted into inquiry.

The enthusiasm shown by the authorities in the infancy stage of the inquiry started to wane after obtaining Ishaq Dar’s statement under section 164 against the Nawaz Sharif family and Hudaibiya Paper Mills.

Ishaq Dar is said to have swiftly shifted to a comfortable place bringing both the then Chairman NAB Gen (R) Amjad and then deputy Chairman NAB Inayatullah Niazi at loggerheads.

The aspects of the matter likely to come under scrutiny include how and why the NAB closed the inquiry against Ishaq Dar; if the FBR (Federal Board of Revenue) was in earnest when it told the JIT it did not have Ishaq Dar’s income tax records pertaining to the period from 1981 to 2002; and if the JIT had any inkling the records missing from the FBR were in the possession of the NAB.

An important aspect of the issue is that later on the inquiry remained an inquiry and could not progress to investigation and then reference filed in a NAB court despite the passage of 16 long years.

Another interesting aspect likely to come under the spyglass is that the inquiry against Ishaq Dar was closed down in July 2016 after 154 days of the release of Panama Papers on 3 April 2016, a time when parliamentarians of both government and opposition had substantially raised their tax contributions.

On average, tax contributions by Senators rose by 30 percent; by Members of the National Assembly by 26 percent; and by cabinet ministers by 70 percent. Prime Minister Imran Khan

– He paid income tax 109 percent higher than the previous year and a surge of 42 percent was witnessed in the income tax returns of Jehangir Tareen.

This was the situation when the longstanding inquiry against Dar was closed by NAB to the surprise of many.

However, a new inquiry against Ishaq Dar, which was initiated on similar charges with a slightly different aspect, witnessed a massive pace and progress unprecedented in the history of NAB.

The newly initiated inquiry against Ishaq Dar raced to investigation and then to reference and the case was heard before an accountability court in a matter of months. Ultimately, Dar was declared an absconder in this reference after he repeatedly failed to appear before the court.

The incumbent government may wish to look into the backgrounds of the NAB inquiry and investigating officers (IOs) and the supervising officers of the earlier inquiry against Dar; why and how they failed to establish anything substantive despite the passage of sixteen years; and what ultimately convinced them to close down the inquiry.

As a matter of fact, NAB itself is responsible for creating contrasting situations as the earlier inquiry lingered on for sixteen years and new inquiry went on the floor of accountability court within months – passing through the stages of inquiry, investigation, and reference.

Similarly, when JIT filed its nine volumes in the Supreme Court, it mentioned that the FBR had expressed its inability to provide income tax returns of Ishaq Dar pertaining to the period 1981 to 2002. FBR said the records were missing or could not be traced, as per the claims of the JIT.

The process received a decisive jolt when the then finance minister holding administrative control of FBR, Dar came out with a startling disclosure that when he came to know that FBR expressed its inability to provide requisite information about his income tax returns, he personally collected income tax returns from NAB and delivered it to FBR for its onward transmission to JIT.

This disclosure was made by Dar when he addressed the press conference the day after the JIT submitted its nine volumes to the Supreme Court. He told the media at the time: “I told the JIT that I will take disciplinary action against those FBR officials who did not provide the required documents and I will send the documents”.

Ishaq Dar then detailed his “hectic efforts” to dig out old records from NAB Lahore and Islamabad offices and send the same to FBR.

“I told them that my tax guy told me that after Gen Pervez Musharraf’s coup, my tax record had been seized by NAB. I told them that NAB is your institution and you should find it and if you cannot find it then I will found it on my own. I retrieved my tax records and sent them my returns on the same day”, Dar had claimed.

Surprisingly, the JIT was unable to include Ishaq Dar reported claim of providing his missing income tax details in its volume at the time of presenting it before the Supreme Court. The JIT volumes carried the details of Dar’s wealth tax returns from 1981 to 2016, yet it carried income tax returns only from 2003 to 2016 not from 1981 to 2016.

Another question likely to emerge is if Dar’s tax records were indeed removed or the FBR used this as a pretext to deny JIT access to these records. It is possible that the FBR officials needed time to get clearance from Dar, their boss at the time, before releasing his tax records to the JIT.

What was the benefit of keeping such information away from the JIT which was later on supplied to JIT through the claimed ‘personalized hectic efforts’ of Ishaq Dar. Whether Ishaq Dar or for that matter PML-N could be able to criticize JIT for projecting a scenario on “incomplete information” as JIT was able to include the portion of the information which, as per the claim of Ishaq Dar, was provided by him to JIT.

It would also be a matter of concern how Ishaq Dar managed to retrieve his income tax records from NAB Lahore and Islamabad offices and supplied them to FBR for the JIT.