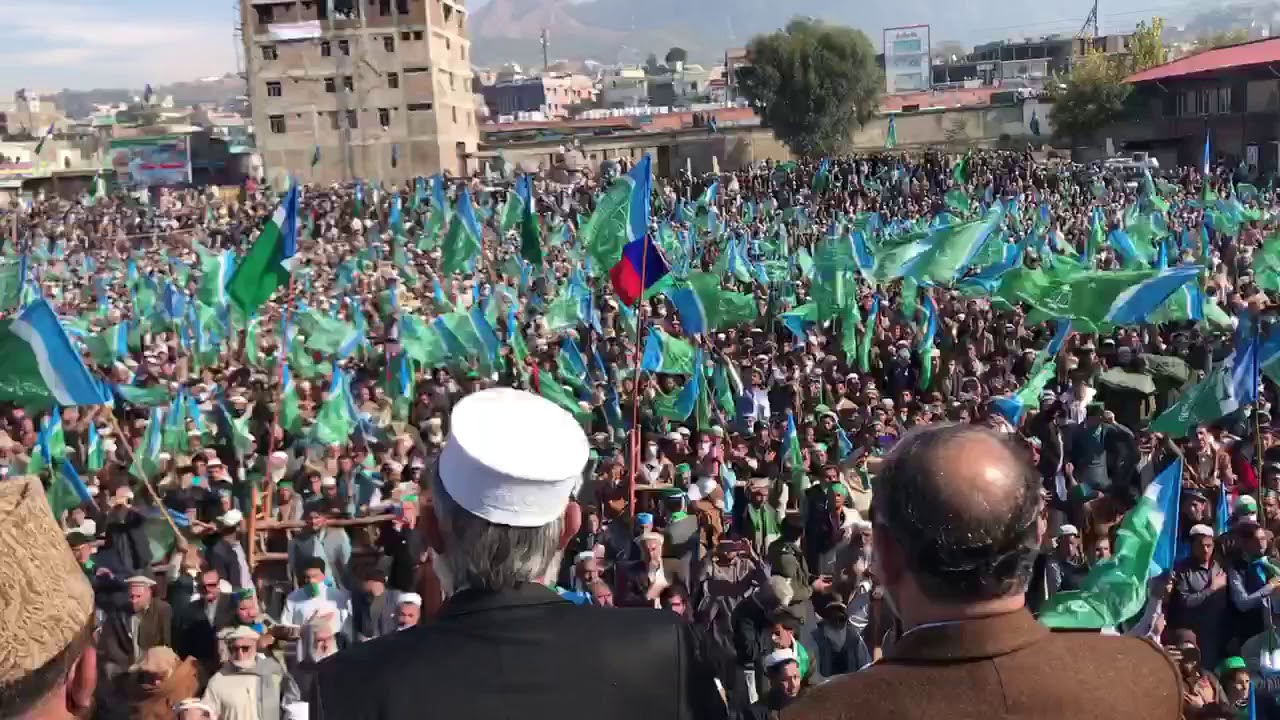 Jamaat-e-Islami chief Siraj-ul-Haq has been on the campaign trail for a while – criticising the government and opposition with equal ferocity at public meetings in several parts of the country. Political observers are drawing some very interesting conclusions from this apparently directionless but incessant mudslinging by the party long known to be in cahoots with the establishment.

The largest Islamist political party of Pakistan has a long history of politics of protests and it has been a key component of many political movements in the country. On occasions, Jamaat-e-Islami has tried to impose the party agenda very aggressively and violently through mass movements and street power. It would use its street power to stage huge protests on the issues ranging from Kashmir, Palestine and ‘anti-Islam’ actions by the international community.

For the most past, Jamaat-e-Islami has tried to contest national elections as a separate entity. It, however, joined hands with Pakistan National Alliance (PNA) to oust Zulfikar Ali Bhutto’s government and contested election under the banner of the nine-party PNA in 1977.

It also remained part of Islami Jamohri Ittehad (IJI), a right-wing conservative alliance formed in 1988, to oppose Pakistan Peoples Party (PPP). For many years, Jamaa-e-Islami and Pakistan Muslim League (Nawaz) have been making seat adjustments in elections. However, it stayed away from Movement for Restoration of Democracy (MRD) spearheaded by PPP to oust the military dictator Gen Zia-ul-Haq.

Although it has been part of major political movements in the past, this time the Jamaat has decided to go solo against the present regime by launching a parallel agitation to that of Pakistan Democratic Movement (PDM).

The current Jamaat amir Siraj-ul-Haq has staged big public gather- ings in various cities of Pakistan to condemn the policies of PTI government which has resulted in worst ever economic slowdown and skyrocketing prices of daily use commodities. At the same time, he roundly criticises the opposition.

The Jamaat only woke up to the bad governance of PTI government only after the PDM launched its country-wide agitation campaign to oust what they call a hybrid regime. The 11-party opposition alliance is out to challenge not only Prime Minister Imran Khan but also the backers of the present regime.

On the other hand the Jamaat leader hitting both the PIT govern- ment and the opposition which is creating doubts among the critics if the JI protest plan has the support of the powers that be to undermine the PDM movement.

By going solo, the Jamaat is trying to target the lot of masses who are perhaps fed up with the existing major political parties – PML-N, PPP, ANP, JUI-F, etc. Some see it as an attempt to create a narrative among the anti-democracy elements in the society that the current political system has failed to deliver and the country needs a new system to get rid of all ills the country is facing for decades.

Lately, the Jamaat has been opposing both the parties in the Parliament too to maintain its identity and sat on the fence during the passage of some important bills. Critics are confused as to what objective the Jamaat wants to achieve by opposing the government as well as the opposition.

The JI has been an important ally of PML-N. But, during the previous rule of PML-N, the JI leaders targeted its government with withering criticism and during Panama Papers case, the JI supremo Siraj-ul-Haq had filed multiple petitions in the Supreme Court against the then Prime Minister Nawaz Sharif.

He would attend every hearing and address press conferences outside the court until Nawaz Sharif was disqualified from holding public office for life.

Many critics believe the Jamaat is caught between a rock and a hard place and now it is treading this path of opposing all sides simply out of frustration over losing political ground. Now it wants to regain some public support that has been lost lately. Being a religious-politi- cal party, it has distanced itself from the major religious parties of the country even though being part of Mutahida Majlis-e-Aml (MMA) which merely exists in Election Commission records.

But some think the Jamaat is again out to muster the support of the powers that be by serving their agenda of casting out all the major politicians of the country and paving the way for a new system more suited to the needs of the country according to some.

Campaigning for systemic change, incidentally, harks back to the formative years of JI as a political force within the Pakistani political milieu. Launched by a Muslim scholar and socio-political philosopher Abul A’la Maududi in Lahore in 1941 as an Islamic movement, the JI opposed the creation of a separate state for the Muslims of India.

However, in an attempt to offset this anti-Pakistan image after Pakistan came into being, it started to advocate the need for an Islamic state through its four-point agenda: reforming the life and mind at the individual level; organizing, motivating, and training virtuous individuals; reforming society more broadly, and reforming the government and political structure.

While Muadudi himself was a staunch opponent of the military’s political shenanigans including jihad by proxy, the JI under his successors was pulled into a permanent embrace with the establishment. Today, it is impossible to parse the party’s policies and workings without reference to that embrace.

Ahmad Waleed is a Lahore-based journalist who has worked for The Nation, The News, Geo News, and DawnNews and is currently associated with 24News. He can be reached @ahmadwaleed