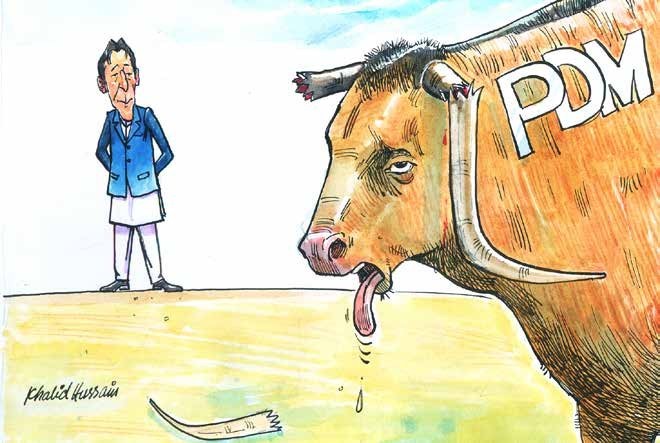 While the Pakistan Democratic Movement (PDM) has yet to come with a viable strategy to unseat the government of Prime Minister Imran Khan, political mobi- lization by the opposition coalition has inflicted severe damage to the country’s powerful military establishment and its painstakingly constructed myth of omnipotence.

They have cooperated with the military establishment while in government and interacted with the powerful establish- ment while in opposition. In other words, they have seen both sides of the power equation in Pakistan’s political system.

They launched a campaign to mobilize public opinion against the PTI government and military establishment some two months back and held rallies in most of the major urban centers of the country.

All of their political leaders are aggressively attacking COAS general Bajwa and his military associates for their alleged role in the 2018 parliamentary elections and the subsequent govern- ment formation. They are less critical of Imran Khan and more vehemently attacking General Bajwa in their speeches.

The current PDM strategy of attacking Gen. Bajwa and his senior associates is therefore a departure from the estab- lished norms of the country’s political discourse.

The only precedents of this kind of criticism in the country’s history were Benazir Bhutto going after the then military establishment after her ouster from power in 1990 and 1996.

A key difference between Benazir’s critique of the military’s involvement in politics and PDM’s frontal attack on the Bajwa-led military establishment is that there has been strong popular response in the case of the latter.

In sharp contrast with the lukewarm response Benazir Bhutto received, PDM’s rallies in major urban centers have garnered large crowds. The military has not responded to accusations – especially from the hard-hitting speeches of former Prime Minister Nawaz Sharif – coming from PDM rallies. Some of the pro-military politicians and media men have instead floated the idea of Grand National Dialogue (GND), which can bring all the stakeholders under one roof for dialogue.

The problem is that PDM leadership is unanimous in rejecting any offer of dialogue with Imran Khan, still in power in Islamabad. They do not say who should oust Prime Minister Khan or what mechanism should be evolved for ousting the PTI government. It is difficult to say it they will be satisfied if extraconstitutional means are adopted for ousting the government.

The path of moving a no confidence move against Imran Khan seems to be anathema to some of PDM leaders. The coalition is undecided, even confused, on the question of resignation from parliament and provincial assemblies.

Amid this indecision, the momentum of PDM’s protest movement is flagging. Some key alliance leaders have already said cold weather is not optimal for a Long March on Islamabad.

They have already covered major urban centers and now have moved towards holding rallies in periphery where even large gatherings will be unable to send shock waves to Islamabad and Rawalpindi.

Analysts say PDM’s indecision on the question of resignation and Long March may turn out to be a catalyst for its falling apart.

The most decisive factor that is keeping opposition parties within the fold of Pakistan Democratic Movement is state machinery’s high handedness in dealing with the cases of alleged corruption. Top leaders of PPP, PMLN and JUI-F are all at the receiving end when it comes to NAB’s probe against alleged corruption.

As the state machinery seems hell bent on pushing the prosecution of top leadership of PDM, forcing leadership of all the three political parties to dig their heels and fight back. This fightback could come in the form of resignation from parliament and provincial assemblies or a Long March towards Islamabad.

But what exactly can they achieve through these acts, apart from displaying their aggressiveness? Can they bring the government down through this? Will they be able to put more pressure on the military through these acts? Who exactly is their target, Imran Khan or Gen Bajwa – or both?

Short analyses of three major component parties of PDM and their relations with the military in historical perspective may shed some light on these questions.

There are reports in the media that NAB is about to arrest Maula- na Fazlur Rehman, which is enough to explain why he is so desper- ate in convincing his fellow leaders to resign and launch long march towards Islamabad.

Historically Maulana Fazlur Rehman and his JUI have cooperated with the military establishment during Musharraf era and even later in deal with the Taliban militants in tribal areas. A large number of his cadre are based in the recently merged areas of Khyber-Pakhtunkhwa.

These cadres have enduring relations with Tehrik-e-Taliban Pakistan, and many times this cadre of second-tier leadership of JUI have acted as a channel through which the military negotiated with tribal militants.

Until recently, the state machinery sought the help of Maulana Fazlur Rehman in dealing with thousands of Deobandi madrassas in Punjab, KP and Balochistan provinces. Most of the Punjab based militant organizations are either the offshoots of JUI or are offshoots of its offshoots.

The JUI, therefore, has many uses for the military establishment and its intelligence agencies in dealing with the threat of terrorism, militancy and extremism. The moderate face of JUI projected by the moderate and urbanized Mullahs like the Maulana himself consider themselves of great value for the state for more than one reason.

It is abundantly clear that the JUI turned against the establishment only after it was deprived of every vestige of the patronage it had enjoyed until the middle of last decade. It should not be much difficult for the military establishment to arm-twist JUI into accepting a new arrangement.

PPP’s importance and significance for country’s political system and military establishment could be judged from the fact that after the demise of every military regime in Pakistan, it was always PPP that came to power.

The PPP is considered a mainstream political party which has stakes in the system even if it remains in the opposition in the parliament. Secondly, PPP is part of the government structure as it is in government in Sindh province. Its leadership has a long enduring liaison with the power structure.

The amicable settlement of the alleged kidnapping of IG police Sindh at the hands of military officials two months back should be an indication of how adept the party is at dealing with the establishment. It is clearly not a party infatuated with revolution.

The story of its significance and importance to the political system is not very different from the story of PPP. It’s a mainstream political party with stakes in the system and many of its second tier leadership is in close liaison with the top military leaders.

Nawaz Sharif has in fact introduced an anti-military narrative into the political discourse of Pakistan while there is still a civilian government in power in Islamabad. This would have serious ramifications for the country’s political system.

It will be useful to remember that Nawaz Sharif is a leader of Central Punjab, where the largest number of the country’s middle class resides and which is the home of Pakistan’s military establishment as the officer corps in Pakistani land forces are drawn from central Punjab.

Nawaz Sharif is unlikely to sheath his sword unless he gets a relief from the country’s judicial system – which he has accused of taking dictation from military and intelligence bosses for giving him jail sentence.

The political leaders in the periphery – like Baloch separatists or Sindhi nationalists – have always been direct in criticizing the military leaders in their role in politics. But these leaders of the periphery hardly get any space in the mainstream media.

Nawaz Sharif is unlikely these leaders of the periphery – he has been a darling of the media in Punjab and perhaps the most popular leader in central Punjab after ZAB. Analysts say his new narrative has already caused a lot of damage to the military’s hegemony over politics – although its repercussions are as yet imperceptible.