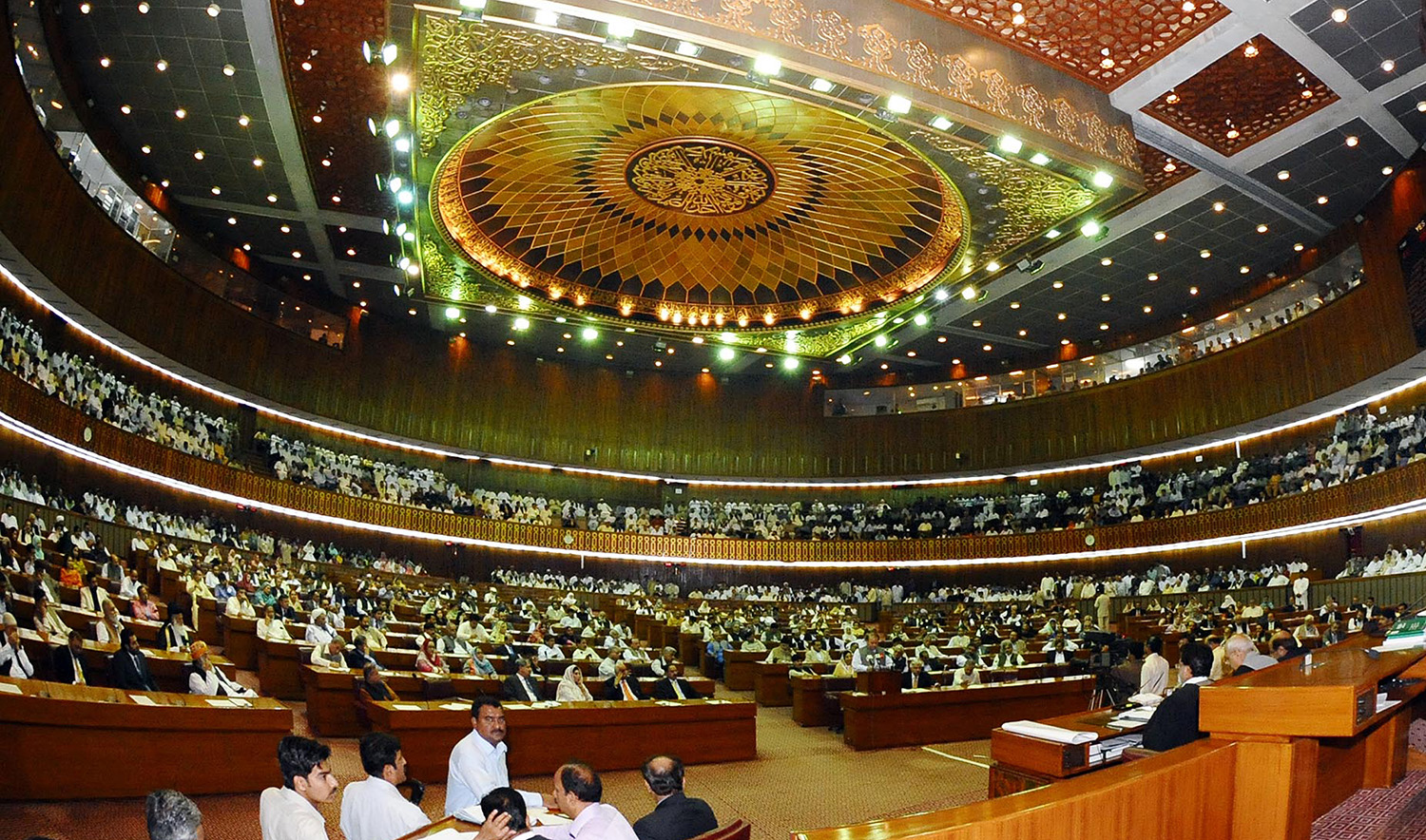 In this handout photograph released by the National Assembly, Pakistani lawmakers gather for the selection of the new prime minister at the National Assembly in Islamabad on June 5, 2013. Pakistan's new Prime Minister Nawaz Sharif called for an end to US drone strikes in the country's northwest, as he took office fo an unprecedented third term. AFP PHOTO/NATIONAL ASSEMBLY -----EDITORS NOTE------ RESTRICTED TO EDITORIAL USE - MANDATORY CREDIT "AFP PHOTO/NATIONAL ASSEMBLY" - NO MARKETING NO ADVERTISING CAMPAIGNS - DISTRIBUTED AS A SERVICE TO CLIENTS (Photo by -- / NATIONAL ASSEMBLY / AFP)

While Prime Minister Imran Khan’s PTI is likely to emerge as the largest party in the Upper House after the upcoming Senate elections, all seems to be set for an evenly split house in which small groups and individual members of provincial assem- blies exercise the casting vote.

Political pundits see the strength of Khan’s Pakistan Tehreek-e-In- saf taking swelling to twenty-eight or more Senate seats. The PPP (Pakistan Peoples Party) will be another gainer, overtaking the PML-N (Pakistan Muslim League – Nawaz) to become the largest opposition group in the house.

Particularly amplified will be the position of members of provin- cial assembly from Balochistan, whose whims may end up decid- ing the winner in a motion.

The Prime Minister’s request for early Senate election has already been rejected by the Election Commission of Pakistan, meaning forty-eight new members of the Senate will be elected in first week of March for a six year term.

There will be no election for FATA this time around as the region has already been merged with the Khyber-Pakhtunkhwa province. The four members from FATA elected in 2018 will, however, continue till end of their tenure in 2024.

This year, twelve members each, including a Non-Muslim will be elected from Khyber-Pakhtunkhwa and Balochistan while Punjab and Sindh will elect eleven each. One member each from women and general categories will be elected by National Assembly to represent Islamabad – a bizarre arrangement where citizens of Islamabad are neither the voters nor the candidates.

Currently, the PMLN has twenty-nine seats in Senate, seventeen of them set to retire this March. Looking at the present composi- tion of the provincial assemblies, Nawaz Sharif ’s party can expect to win five seats in Punjab and one in KP. Its total strength in the new house will thus be eighteen – eleven seats less than its present strength.

PTI on the other hand can expect to win nine or even ten out of twelve seats on offer from Khyber-Pakhtunkhwa, five from Punjab, two each from Islamabad and Sindh and one from Baloch- istan. Together with the eight members elected in 2018, the party will have about twenty-eight seats in the new house.

In Sindh, PTI is the largest opposition group with thirty seats followed by MQM (21) and GDA (14). If they synchronize their electoral strategies, they can win three seats from general category and one each from women and technocrat categories. PPP can thus be restricted to four generals and two women and technocrat seats from the province.

With a smaller and perpetually fragmented provincial assembly, Balochistan is likely to remain true to its reputation to buck trends and defy predictions. Voting contrary to party lines has been quite a common practice in the province. If the tradition holds, anything can happen.

If, however, votes are cast along party lines and both the ruling and opposition coalitions can agree on seats adjustments among them- selves then ruling coalition can win eight or more senate seats from the province and opposition can get four.

Although it has joined the opposition PDM alliance, the ANP (Awami National Party) continues to be part of the government coalition in Balochistan. The party’s four seats in the provincial assembly can influence the outcome of the exercise.

ing BNP-Awami, Jamori Watan Party and Hazara Democratic Party with combined strength of six votes will have to be satisfied by PTI and BAP, failing which they can join the opposition JUI-F and BNP-M and cost the ruling alliance the provincial government as well as the majority in the Senate.

However, if all is managed well by the ruling coalition in the Balochistan Assembly, Balochistan Awami Party can expect to get five or six seats from the province and emerge as fourth largest group in the Senate with twelve/thirteen seat.

Due to its majority in National Assembly, which is the electoral college for members of Senate from Islamabad, PTI can win both seats on the offer from Islamabad. However, its razor-thin majority will have a real test in the secret ballot and it will have to offer many concessions to its allies to get the votes and avoid embarrassment as well as the loss of secure seats.

PTI lead alliance will still be short of absolute majority in the upper house of parliament which will be reduced to 100 from present 104 after the March elections.

With one Baluchistan seat going to ANP the PDM parties can expect to have 47 seats in the upper house of the Parliament. Ishaq Dar’s vacant seat will bite the opposition here. Four remaining FATA seats will, however, decide the majority. They are expected to go with the government. However, any unexpected results in any of the electoral colleges in favour of the opposition can tilt the balance against the ruling coalition.

If, however, the PDM parties follow through on their threat to quit the assemblies before the Senate elections, the ruling coalition will get a walkover, securing a two-thirds majority in Senate.