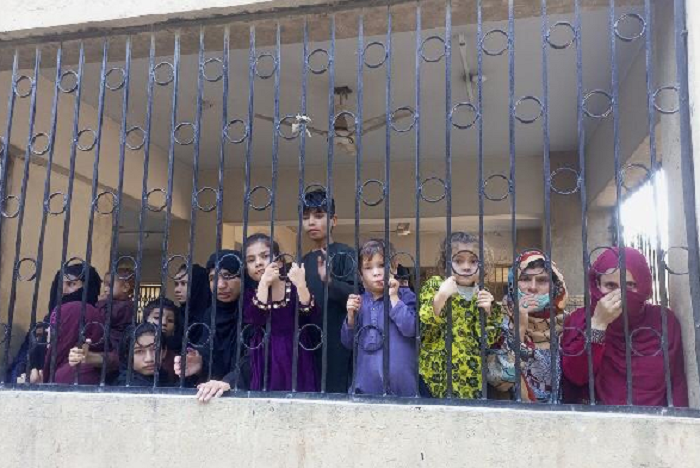 Islamabad: A petition is submitted to the National Commission for Human Rights (NCHR) in response to the recent controversy surrounding the detention f Afghan refugees, including over 129 women and 178 children in Sindh’s jails. The petition asks the NCHR to prevent the federal government from imprisoning or forcibly deporting deporting Afghan asylum seekers.

The petition, which has been filed under Section 9 of the NCHR Act 2012, contends that under the law, those Afghans refugees whose applications for asylum are still pending before the UNHCR can neither be detained nor deported. The petition was filed by Umer Ijaz Gilani, a practicing lawyer and a Pakistani citizen.

To do so would violate the principle of non-refoulement which Pakistan is legally bound to respect under international human rights treaties, international customary law and numerous articles of the Constitution of Pakistan.

He made the Federation through interior secretary, DG immigration and passport, Ministry of Foreign Affairs secretary, Ministry of Safron chief commissioner Afghan refugees, National Database and Registration Authority chairman and the country representative of the United National High Commission for Refugees respondents.

The issue recently caused alarm among the generous and kind-hearted people of Pakistan with the emergence in the media of a picture of children of Afghan refugees locked up in a prison in Sindh. Gilani said that the subsequent statement by Sindh Minister Sharjeel Memon confirmed that at least 129 Afghan female asylum seekers along with 178 children were jailed in the province.

The petitioner stated that, based on the work carried out by Exile Helpline, a legal aid initiative, the issues faced by Afghan asylum-seekers, especially former human rights defenders, who fled to Pakistan after the Taliban takeover, had been documented.

The testimony of over a 100 human rights victims showed that they were facing daily difficulties primarily because the UNHCR was not processing their asylum applications with speed.

In the meantime, the Pakistani authorities were also not promptly renewing visas, putting the applicants at the risk of deportation and detention under Foreigners Act, 1946, a colonial era law.

With expired visas, these people could not access even basic facilities such as mobile service. Even when their visas were renewed, they faced extortion at the hand of agents. All of this amounts to human rights violation of asylum-seekers by Pakistani authorities.

The petition stated that the case of former Afghan human rights defenders who were compelled by circumstances to flee to Pakistan after the Taliban takeover, was particularly disturbing. “It is ironic that who are trained to defend the human rights of others have been reduced into victims of human rights abuse. Yet, no one in the human rights community seems to care about their fate.”

The petitioner urged the NCHR to exercise its jurisdiction under Section 8 of the NCHR Act 2012 to protect human rights.

Relying on Article 4 of the Constitution and Article 2 of Covenant on Civil and Political Rights (CCPR), he asserted: “The rights which this commission is legally mandated to defend, are not just the human rights of Pakistani citizens, but also the human rights of those who are ‘for the time being in Pakistan’.

“This conclusion flows from both international conventions on human rights and also from the Constitution of Pakistan, 1973. Both confer generous rights upon foreigners, especially those foreigners who fall within the category of refugees.”

The petitioner contended at numerous fundamental rights accrue to foreigners under the Constitution of Pakistan, 1973 which include: Article 4 (Due Process), Article 9 (Life and Liberty), Article 10 (Arrest and Detention procedures), Article 10A (Fair Trial), Article 11 (Slavery and forced labour), Article 12 (Retrospective punishment), Article 13 (Self-incrimination and double jeopardy), Article 14 (Human dignity and privacy of home), Article 21 and 22 (Religious Oppression), Article 24 (Expropriation) and Article 25A (Children’s education). The NCHR has been urged to restrain the federal government from detaining or forcefully deporting Afghan asylum-seekers.

A direction has also been sought against the UNHCR representatives in Pakistan to expeditiously process and decide all the asylum applications. A direction has been sought to NADRA and UNHCR to streamline the process of birth certificate registration for the Afghan HRDs.

The petitioner contends that he “is aggrieved because he belongs the people of Pakistan, a people who have assimilated more refugees than any other people in the entire history of the modern world. This is an indicator of human goodness where Pakistan stand far ahead of the so-called ‘civilized countries’ of Euro-America … yet, the callousness of a few state officials is tarnishing our nation’s hard-earned achievements”.