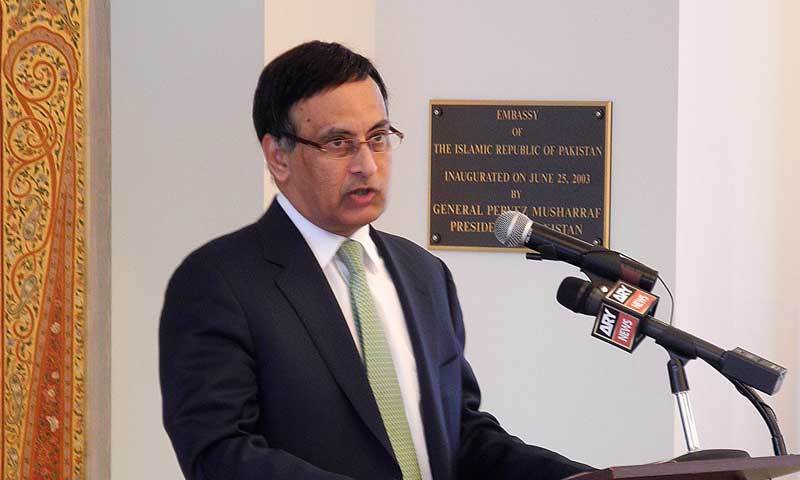 Pakistan's ambassador to the United States, Husain Haqqani, addresses a memorial service in honor of slain minister for minorities Shahbaz Bhatti at the embassy in Washington on March 9, 2011. Haqqani said that Pakistanis were tolerant but needed to speak out in the wake of the killing of Bhatti, a Christian shot dead in broad daylight as he campaigned for reforms to protect minorities. AFP PHOTO / SHAUN TANDON

PTI Insiders Now Claim Their US Lobbyist Against Their Own Government:

PTI Insiders Now Claim Their US Lobbyist Against Their Own Government

WASHINGTON: The Documents showing that a former CIA station manager in Islamabad Robert Grenier and Pakistan’s former ambassador to the US were hired to lobby for the Pakistan Tehreek-i-Insaf (PTI) in Washington may not exactly be breaking news.

But based on fresh information that has come to light recently, PTI insiders are now claiming that these men were lobbying against their own government and played a key role in bringing it down.

PTI officials in the US also claim that both men — Robert Grenier and Hussain Haqqani — were working for a senior figure in the military establishment, a claim Mr Haqqani rejects as incorrect.

The documents on the Foreign Agents Registration Act (FARA) site showed that on July 16, 2021, someone in Pakistan hired Mr Grenier to lobby on their behalf in Washington. Mr Grenier revealed this in his FARA declaration on July 17, 2021.

The documents identified Iftikhar Rehman Durrani of PTI as the person who hired Mr Grenier, but it was the Govern­ment of Pakistan that was paying him. In Aug 2022, the Pakistani media also reported that the PTI had hired a CIA veteran to advise them on US ties.

Within this period, Mr Grenier gets $150,000 for “media research”. The supplement clarifies that no attempt was made to influence US foreign policy anyway.

In November 2022, Mr Grenier filed an amendment to the supplemental, giving details about the disbursement of funds. It showed that the ex-CIA chief made two payments Mr Husain Haqqani, of $20,000 and $10,000 each.

In a recent Twitter thread, journalist Waqas Ahmed claimed that Mr Haqqani met a top Pakistani official in Dubai months before the PTI government was toppled. But the former ambassador denied this claim as well.

The claims — and counter-claims — have become the top trend on social media as thousands of people have gone through the documents on the US Justice Department’s FARA site and watched talk shows highlighting the issue.

It was also reported that the documents verified by it showed the two men were hired to lobby by a Pakistani government official, Iftikhar Durrani. Mr Durrani had served as a special assistant to then-prime minister Imran Khan.

But PTI officials said that Mr Durrani had already resigned from his post when he signed the document. One party official said Mr Durrani told him he did so “under coercion.”

Mr Haqqani, the former ambassador who is also mentioned in the latest FARA documents, was the central character in the Memogate controversy. Delivered in May 2011, it was claimed that the alleged memo was a message from the PPP government which was seeking the Obama administration’s support to reign in the Pakistan military after the Osama bin Laden raid in Abbottabad, Pakistan.

The controversy eventually led to the resignation of Mr Haqqani as ambassador and significantly weakened the PPP government. However, the former envoy to Washington told that the claims were exaggerated. “Someone has added 2 plus 2 to get 9.

I have never interacted with Mr Durrani, have never had an interest in working with PTI, and my stance against the military’s role in Pakistan’s politics is well known and unchanged,“ he said.

“I am currently only engaged in research and consulting work and have not had anything to do with Pakistan’s domestic politics for many years.” He said it was “unfortunate that my name is being unfairly invoked in matters with which I have nothing to do.”

Mr Haqqani said he had no relations with the Pakistan military except with friends and family members who served in it. “Given that I was vilified for being anti-Pakistan and anti-military for years, questions about whether the then army chief met me should be directed at the military.”

He added that, “I did not meet Gen. Bajwa as alleged. Though I see no reason why a former Pakistani ambassador and the army chief should not meet to exchange views.”

She said that some points were still missing. “First, the whole project was done covertly with no cabinet approval and bypassing procurement procedures.”

She claimed that Donald Lu, the US diplomat had a close relationship with Mr. Haqqani. Mr Lu is alleged to have threatened the PTI government at a lunch at the Pakistan Embassy in Washington. People in Washington backed this claim, but did not give details.

In this article:Hussain Haqqani, PTI Insiders Now Claim Their US Lobbyist Against Their Own Government:, PTI Lobby, Robert Grenier