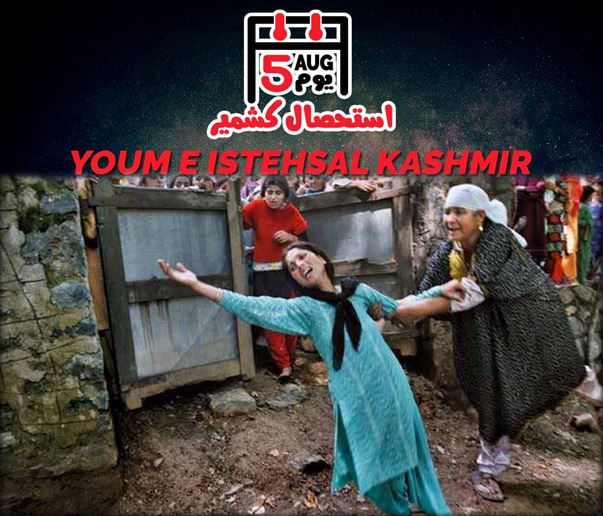 ISLAMABAD: Pakistan is observing Youm-e-Istehsal Kashmir today to express solidarity with the people of Kashmir, as it marks two years of Indian occupied Kashmir’s(IoK) military siege.

Two years ago, on August 5 2019, the Narendra Modi government revoked the territory’s special status, withdrawing the autonomous status that the Kashmiris and Pakistan have vehemently opposed since then.

A host of events have been arranged in order to denounce the Indian unilateral, illegal actions against the Kashmiri people. Solidarity walks of one mile will be arranged in all the main cities, including the federal capital.

The participants of the walk will wear black bands and carry the flags of Pakistan and Azad Kashmir. A one-minute silence was observed across the country while traffic was also halted for a minute, and sirens were sounded.

A rally was also arranged at the Ministry of Foreign Affairs to mark the day.

“A day will come when they get the freedom from Indian occupation. Indian Aug 5 actions have been rejected by the people of Kashmir and the rest of the world,” he noted.

Pakistanis will not rest until occupied Kashmir is liberated: President Alvi

Speaking to a rally in Islamabad, President Alvi said no Pakistani will rest until occupied Kashmir, under Indian military siege, is liberated.

“Pakistan will liberate occupied Kashmir,” he said. “Let me warn India that Pakistan is a strong nation,” he added.

President Alvi said that Kashmir was to become part of Pakistan at the time of partition, if it were not for India’s wrongful actions. He said Islamabad would not hold talks with New Delhi until it reversed its August 5 actions.

Alvi said there was a stark difference between occupied and Azad Kashmir, adding that media was subjugated in the former while it was independent in the latter.

He said India was changing the demographics of occupied Kashmir to suit its agenda, adding that New Delhi had trampled the principles of freedom and was setting back efforts to restore peace in the region.

The president also led prayers for the martyrs in occupied Kashmir.

In his message on the occasion, Chief of Army Staff General Qamar Javed Bajwa said the resolution of the Kashmir dispute as per the UN resolutions and aspirations of the Kashmiri people is imperative for enduring peace and stability in the region.

“Continuation of inhuman military siege, machinations to bring demographic changes and gross violations of human rights and international laws are perpetuating humanitarian and security crises in IIOJ&K that imperil regional security,” he said.

In his message on Youm-e-Istehsal, Prime Minister Imran Khan has reaffirmed Pakistan’s abiding commitment to the Kashmir cause.

The prime minister called upon the international community, including the United Nations, human rights organizations and the global media, to hold India accountable for its crimes against the Kashmiri people.

“We will continue to extend all possible assistance to Kashmiris till the realization of their inalienable right to self-determination and a just resolution of the Jammu and Kashmir dispute, in accordance with the relevant UNSC resolutions and the wishes of the Kashmiri people,” he said.

These actions, he said, were followed by an unprecedented military siege and restrictions on fundamental rights and freedoms of the Kashmiri people to perpetuate Indian occupation in the occupied territory.

“Yet, India has failed to break the will of the Kashmiri people,” he added.

The premier pointed out that the Kashmiris faced unabated extra-judicial killings, custodial tortures and deaths, arbitrary detentions, burning and looting of houses to inflict collective punishment, and other forms of human rights abuses.

“India’s illegal and unilateral actions of August 5, 2019 and subsequent measures particularly pertaining to domicile rules and the land ownership laws are aimed at changing the demographic structure of IIOJK and converting the Kashmiris into a minority in their own land,” he added.

The prime minister further said that these measures are blatant violations of international law, including the UN Charter, the United Nations Security Council resolutions, and the 4th Geneva Convention.

“Pakistan, the Kashmiris, and the international community forcefully rejected these steps,” he added.

He said Pakistan had the utmost respect for the people of IoK for their unparalleled courage, sacrifices and persistence in facing Indian tyranny as they resolutely struggled for their legitimate right to self-determination.

“All the unilateral and illegal actions taken by India in the IoK, from the outset, the measures initiated on and after August 5, 2019, and any additional unilateral changes that India may introduce in the future, are violations of international law, including the Security Council resolutions and the 4th Geneva Convention, and ipso facto null and void,” the prime minister maintained.