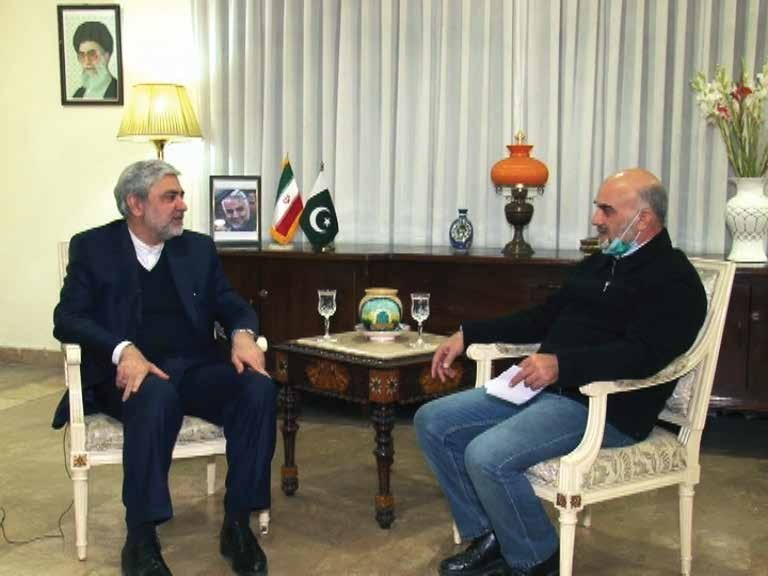 Iran’s Ambassador to Pakistan Seyed Mohammad Ali Hosseni is one of the leading lights of the social and intellectual circles of Islamabad. The Truth International recently had an opportunity to sit down with him for a wide-ranging conversation. Given below for your reading pleasure is an abridged transcript of the interview.

TTI: One year after the assassination of IRCG Al-Quds Force Commander Gen Qassem Soleimani, how would you assess the regional situation?

SMAH: Gen Qassem Soleimani fought against terrorists through- out his life and he was the biggest impediment in the establish- ment of the ISIS government. Gen Qassem’s assassination by the US was in fact helping the terrorists. The way Donald Trump boasted Gen Qassem’s assassination truly reflected state terrorism. It is evidence the US is [not a force for] peace and stability in the region but for chaos and turmoil. The presence of US forces in our region is the root cause of all evils and Iran will resist them to the last. We will not let the US expansionist and Israeli Zionist designs to succeed.

TTI: Has Iran avenged the assassination of Gen Qassem or it is yet to come?

SMAH: Iran’s retaliatory strikes in this regard were only a sort of instant and token reaction. We have resorted to other means too and we will do so specifically by using our internationally recognised rights. We want the perpetrators of this act of terror- ism brought to justice.

TTI: Does Iran think it was only Trump involved in Gen Qassem’s assassination or some other regional actors played as collaborators?

SMAH: The government and people of Iran think that Trump, his like-minded and some countries of the region are involved in

this heinous crime. But our focus is on our archenemy – the United States.

TTI: Should Iran expect improvement of ties with US in the wake of Mr. Joe Biden’s election as President?

SMAH: Our experience suggests we should rather see action, and not election of the US president. Trump used a considerable part of his tenure in Iran-bashing. He brazenly assassinated our military commander when he was in another host country. Trump shame- lessly and unilaterally withdrew from the Iran nuclear deal. Joe Biden needs to right Trump’s wrongs and first of all restore the Joint Comprehensive Plan of Action (JCPOA).

TTI: Iran recently announced to enrich its uranium to 20 percent, don’t you think it would cause further complications?

SMAH: Our nuclear agreement is unilateral and multilateral as well. So all parties have to fulfil their obligations, you cannot put all responsibility on one party. The nuclear watchdog IAEA is witness to the fact that Iran has fulfilled all its responsibilities hundred percent. The US has also been forcing European parties to the accord to pull back in an effort to jeopardize it. Under the circum- stances, Iran has decided to lessen its level of responsibilities. Iran’s supreme leader Ayatollah Ali Khamenei has forbidden the attainment of nuclear weapons through [a decree].

SMAH: Yes we hold this Zionist and terrorist Israeli government responsible for this act. Not only this, but Israel has been involved in the assassination of a number of our scientists and scholars too. This Zionist regime must make no mistake that Iran will give a solid, manifest and timely response to its criminal act once our investigations are completed.

TTI: UAE and Bahrain have recognised Israel while other Gulf States stand in line. How does Iran view the Israeli entry into the Gulf ?

SMAH: The Presence of the Zionist Israeli government in the region is the only cause of instability, lawlessness and chaos. Not only countries and nations of the region but the entire world now knows that Israel is an unlawful, unjust and a terrorist state and recognition of Israel means giving it opportunity for all these evils; Iran would resist the developments that are against the nations and states of the region.

TTI: A general perception is that Gulf States, specifically the UAE, have recognized Israel to contain Iran. Do you agree? SMAH:

The  Zionist  state  of   Israel  has  been  conspiring and striving hard against Iran for the last four decades with the connivance of the US, and some countries of region have also contributed to it, but they could achieve nothing. Iran’s stance is based on principles and we abide by it. Countries of the region must under- stand that they can gain nothing from siding with Israel.

TTI: Referring to Pak-Iran relations, the gas pipeline project is languishing for many years despite the fact that Iran has completed its part of the project. Don’t you think it’s frustrating for Iran?

SMAH: Pak-Iran gas pipeline project is a vital economic endeavour. It was carried out on the basis of the fact that Pakistan was an energy-deficient while Iran was energy exporting country. Iran has completed its part of the gas pipeline project despite economic hardship caused by sanctions and has brought the pipeline close to the border with Pakistan.

TTI: Do you expect the current government of Prime Minister Imran Khan to complete this long-delayed bilateral project?

SMAH: We hope that the gas pipeline project would be completed during the current Pakistani government, we hope Pakistan soon overcome its difficulties [and finishes construction of the section inside Pakistan] so that this highly significant project sees comple- tion. This gas pipeline project would in fact usher in a new era of economic prosperity and stability primarily in Pakistan and secondly in Iran.

TTI: How do you see Pak-Iran trade and tourism in a post-COVID-19 world, specifically with regard to Pakistani Zaireen wishing to visit Iran?

SMAH: Like other countries, Iran and Pakistan have been hit by the Coronavirus pandemic in terms of trade and tourism, but it has also provided us with opportunities. Amid this pandemic, we have opened a new border crossing terminal at Rimdan Gabad, which is the second after Taftan and Mirjawa. We had a 900-km border but we had only one border crossing since the creation of Pakistan. Now we have two. This development would lead to the emergence of border markets on both sides. We are not issuing any tourist or Zaireen visas right now because of the pandemic but once the situation returns to normal, we would gladly do so.

In this article:Fkhirzadeh, Iran, Islamabad, Soleimani

The writer is a senior journalist based in Islamabad.