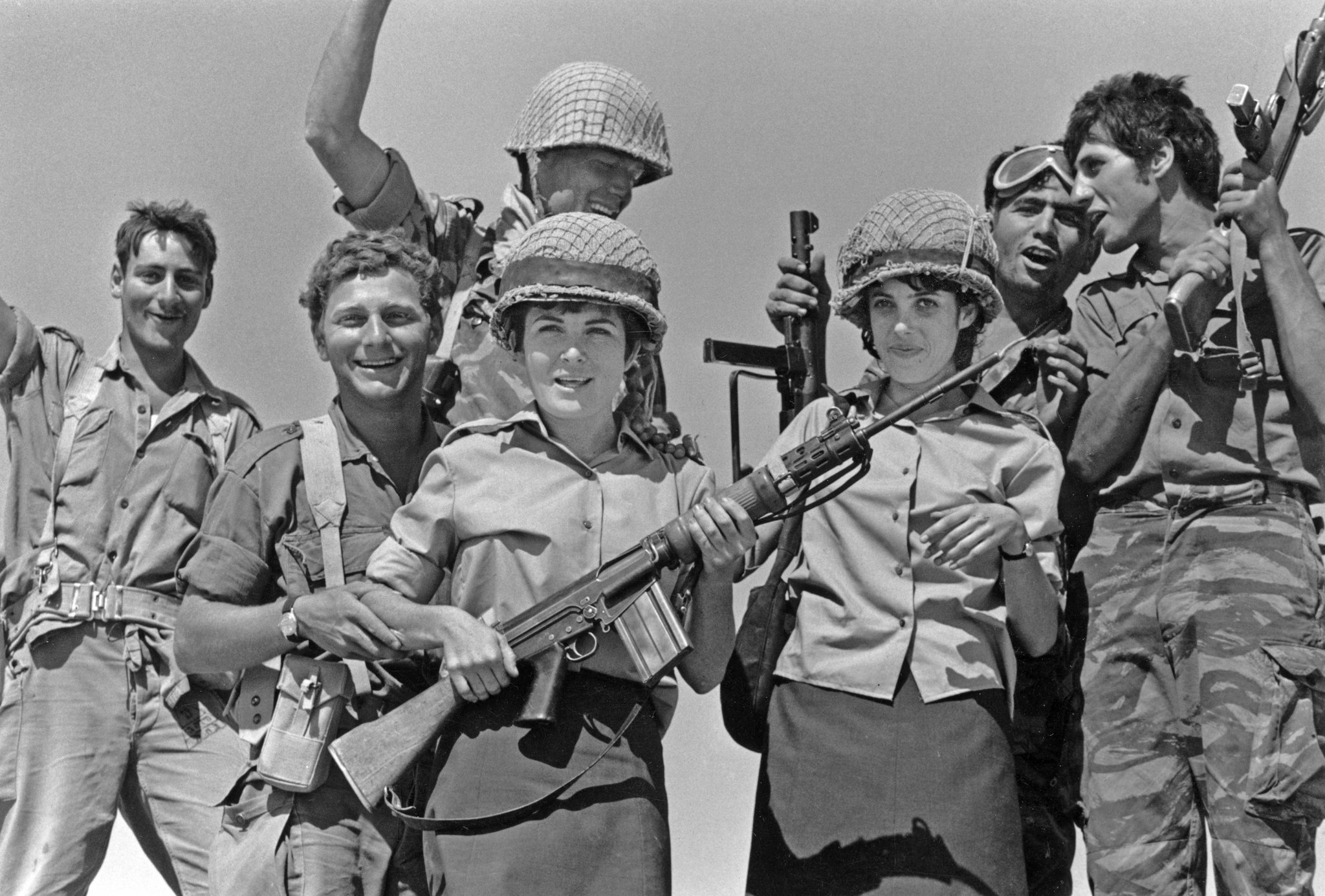 The Suez Crisis (1956), the Six-Day War (1967) and the Yom Kippur War (1973) resulted in Israel taking over Sinai Desert, East Jerusalem, West Bank and Golan Heights and defeating the combined forces of Egypt, Syria and Jordan. Throughout its history, the Zionist state always had strong support from Britain and after WW2 from the United States.

In 1964, Palestinian resistance groups Fatah and PFLP Joined hands to form Palestinian Liberation Organization (PLO) with headquarters in the West Bank. After Israel overran the West Bank in the 1967 War, the PLO HQ shifted to Jordan. The prospect of a joint PLO-Jordanian Army offensive became a nightmare for Israel.

Unfortunately, some factions in PLO started planning to overthrow King Hussein of Jordan. Consequently, the Jordanian Army crushed the PLO and forced them to leave for South Lebanon, from where they kept up attacks on Israel from 1971 to 1982. In 1982, Israeli Defense Forces (IDF) invaded Lebanon and forced PLO to leave Lebanon for Tunis, signed a Peace treaty with Lebanon, created a Security zone and withdrew to Israel.

Since 1948, Israel and Arab countries were in a state of war. Israel in mid-seventies offered peace to the Arab States. Egyptian President Anwar Sadaat accepted the offer and signed a Peace Accord in 1978, brokered by US President Jimmy Carter. Israeli withdrew from the Sinai Peninsula, state of war between the two countries ended and full diplomatic relations were restored.

This was the first time a leading Arab country had recognized Israel’s sovereignty and accepted its boundaries. Egypt gave up the demand of an independent Palestinian state, committed not to support violence against Israel, and agreed to talks of Palestinian self-rule.

The allowed Egypt to cut defence spending by ten times. Trade with the US and Israel got a boost, and Egypt became a major recipient of US aid. The barrier to Israel’s trade with Egypt was removed. Safe passage for Israeli ships through Suez Canal was granted.

The arrangement provided a fig leaf of international legitimacy for Israel and its international trade experienced a significant boost. Simultaneously, it successfully isolated Palestinian from Egypt, their bastion of Arab support. The Camp David accord became a model for future regional peace deals and Israel-Arab conflict slowly came to be framed as Israel-Palestine conflict.

In 1981, after Anwar Sadaat was assassinated as a result of the unpopular peace treaty, Israel’s treatment of Palestinians became harsher.

Jordan and the PLO sided with Saddam Hussain in the 1991 Gulf War. After his defeat, both Jordan and PLO fell out of favour with USA, Israel and Arab States, who stopped funding of PLO. Under pressure, the PLO in 1993 signed a peace agreement after secret negotiations with Israel. As a prerequisite for talks, PLO

i) accepted the two-state solution,

iii) agreed all disputes would be resolved only mutually. Israel in return accepted PLO as the representative of Palestinians in lieu of Palestinian Statehood.

Israeli Military was stationed in the West Bank and Gaza. Israeli Military & Security agencies started dealing with Palestinians directly. PA practically became a handmaiden of Israel for arrest- ing anyone identified by the Zionist officials as a terrorist but was not allowed to interrogate any detainee.

A significant number of Palestinians living inside and outside Israel considered the deal a sell-out, giving up on seventy-years-old right to self-determination and an independent Palestine. Palestine Authority was recognised the world over as an independent entity with its embassies dotting the globe and foreign assistance and international trade started flowing.

Israel’s gains were significant, being received as a peacemaker rather than an illegal occupier. Away from the public eye, many Arab countries warmed up to their Zionist neighbour. Only 22 per cent of Palestinian territory came under the PA, while 60 per cent of the West Bank remained open for Israeli development besides settler areas.

Between 1993 and 2000, bypass road networks outside Palestine towns were developed. Parallel electricity and water systems, as well as goods transport infrastructures, were developed for the settlers. This resulted in mushrooming of new settlements despite international condemnation. Nevertheless, Israel’s international trade and foreign direct investment continued to soar.

Jordan approached Israel for a peace deal in 1994 to appease the US and to secure Israel’s endorsement for the resumption of defence supplies blocked due to siding with Saddam.

Jordan soon became the third country to end the state of war with Israel after Egypt and Lebanon, restoring full diplomatic ties. The formal administrative boundary between Jordan and the Israeli-occupied West Bank was accepted. Cooperation against border attacks, work towards resolution of the issue of Palestinian refugees, the establishment of a free trade zone, and a water committee for dispute resolution were part of the agreement. Jordan was granted a special role in administering the holy Islamic Shrines in Jerusalem.

However, official rapprochement notwithstanding, all peace agreements deals signed by Arab rulers with Israel are still unpopular among the Arab masses even in 2020.

Trump’s deal of the century is a major step towards Greater Israel. It denies Palestine all its territorial rights. Israel plans to annex the entire Jordan River valley as well as illegal settlements in the West Bank. It derogates Palestinians right of return by naturalizing them as citizens of Lebanon, Jordan, Syria, Iraq and elsewhere regionally where they reside.

Some say that Greater Israel design is not strictly a Zionist Project for the Middle East, it is an integral part of US foreign policy, and its strategic objective is to extend US hegemony as well as fracture and balkanize the Middle East. Trump’s decision to recognize Jerusalem as Israel’s capital is intended to trigger political instability throughout the region.

According to the founding father of Zionism Theodore Herzl, the area of the Jewish state stretches “From the brook of Egypt to the Euphrates”. According to Rabbi Fischmann, The Promised Land extends from the River of Egypt up to the Euphrates. It includes parts of Syria and Lebanon” when viewed in the current context including the siege on Gaza, the Zionist Plan for the Middle East bears an intimate relationship to the 2003 invasion of Iraq, the 2006 war in Lebanon, the 2011 upheaval in Libya, and the ongoing turmoil in Syria, Iraq and Yemen, not to mention the simmering political crisis in Saudi Arabia.

The Greater Israel Project consists in weakening and eventually fracturing neighbouring Arab states as part of a joint US-Israeli expansion project, with support from NATO and Saudi Arabia. In this regard, the Saudi-Israeli rapprochement is a means to expand- ing Israel’s sphere of influence in the Middle East as well as confronting Iran.

According to famous US Diplomat and Bipartisan US Middle East Envoy Denis Ross, “The UAE and Israel share a perception of threat from Ikhwan Ul Muslimoon and Iran. Emiratis are demanding a freeze on settlement and annexation in lieu of [Israel’s] recognition, hence doing a service to the Palestinian cause. They are implying to the Palestinians to come out of their mindset stuck in the past, be creative, and grab the window of opportunity.”

The reported resignation of Hanan Ashravi, a member of PLO executive committee, over Palestine Authority first severing ties in May 2020 and restoring a month back reflects the hopelessness of the situation of Palestinians.

Looking back, what has changed in the Middle East is the hand wielding the biggest hammer. In the 1920s, the Zionists prevailed over the nascent Arab states with help from Britain. As the 2020s start, the Zionists are winning all over again over a much diminished Palestinian power with help from the US.

Might is right is the inevitable moral of the heart-breaking story of one hundred years of Palestinian servitude at the hands of Zionists. It is a tale of deception, bigotry, and betrayal drenched in blood and tears that drives home the point promises are to be kept if one is not mighty.