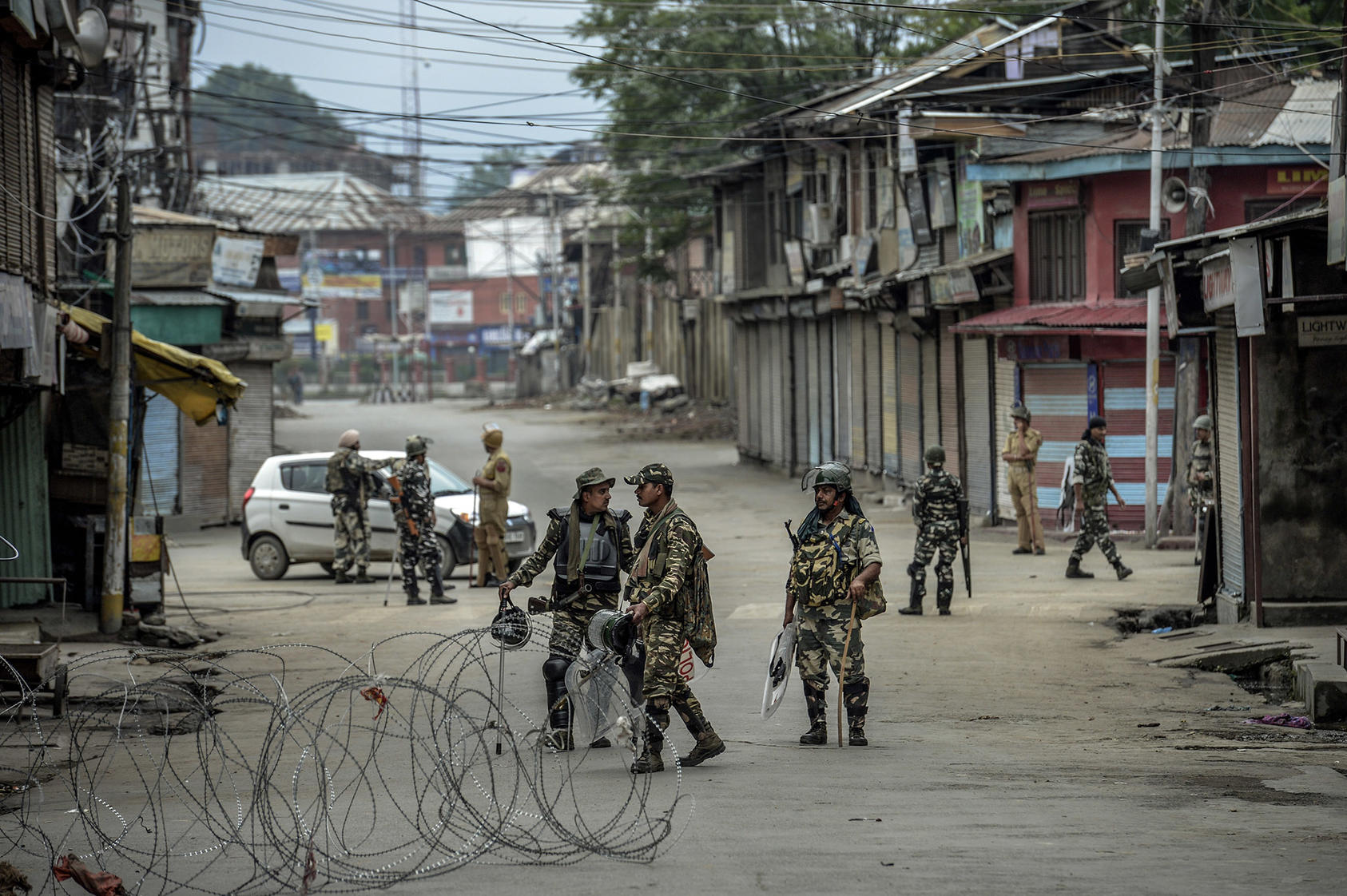 Barbed-wire placed by security personnel stretches across a Srinagar street in Indian-controlled Kashmir, Aug. 11, 2019. Prime Minister Imran Khan of Pakistan complained bitterly about what he described as repeated rebuffs from India over Kashmir. And he raised the threat of military escalation. (Atul Loke/The New York Times)

Sumantra Bose, an Indian-origin British Professor in his book, Kashmir: Roots of Conflicts, Pathways to Peace (Cambridge: Harvard University Press, 2003) rightly suggested that “the key to breaking the deadlock in Kashmir lies in the metropolitan capitals of India and Pakistan. Concerted, sustained intergovernmental cooperation between India and Pakistan is the essential basis of any Kashmir peace process.” Yet, following unilateral measures taken by New Delhi on August 5, 2019, to abrogate Article 370 of the Indian constitution which granted special status to the Indian controlled Jammu & Kashmir (J&K), the very nature of the Kashmir conflict has changed dramatically.

The people of J&K who are the real stakeholders of the Kashmir conflict are now marginalized and voiceless. India annexed Jammu, Valley, and Ladakh under J&K Reorganization Act passed by the Indian parliament on August 5 whereas, Azad Jammu & Kashmir (AJK), Gilgit, and Baltistan administered by Pakistan are also being claimed by India. In the meantime, the government of Pakistan is considering declaring Gilgit and Baltistan as an interim province of Pakistan which has raised several questions about the timing, wisdom, and legality of such a step.

Following unilateral measures of August 5, 2019, by India to end the special status of J&K one needs to ask if there is any light at the end of the tunnel as far as peace in that volatile region is concerned? Has Pakistan lost Kashmir once and for all and will India be able to keep its occupied parts of J&K by force? Why the international community has not taken steps to compel India to reverse its unilateral steps of August 5? Is Kashmir still a flashpoint after India’s unilateral annexation of its occupied territories of Jammu, Valley, and Ladakh? These are the questions that are raised by those who are concerned about the fate of millions of people in Jammu & Kashmir.

The dynamics of J&K needs to be analyzed while keeping in mind that India and Pakistan fought two wars over that conflict in 1965 and 1971 and confronted militarily in Kargil during the summer of 1999. So far around 100,000 people have been killed in occupied J&K since the outbreak of violence in 1989 and India has deployed around 600,000 of its military and para-military forces. The line of control (LoC) dividing the Indian and Pakistani administered J&K is a symbol of Kashmiri’s ordeals and sufferings. Millions of divided families along LoC reflect a human tragedy. It seems following the absorption of J&K by India the ground realities have changed and the Muslim-dominated Valley is now a target of the Modi regime’s policy of colonizing that land and enslaving the people by repressive means.

While contemplating if there is light at the end of the tunnel one needs to take into account three major realities. First, back to backsteps taken by the Indian government since August 5 tend to cause landmark demographic changes particularly in the Muslim majority Valley of Kashmir. First, it was the new domicile act which allowed non-locals living in J&K to seek employment, and second was aimed to take possession of thousands of acres of land in the Valley for so-called tourism projects. Settlement of non-Muslims particularly Kashmiri Pandits who left the Valley after large-scale violence in 1990 are to be settled in colonies on the lands seized by the Indian authorities so as to transform the demography of the Valley of Kashmir.

From any standpoint, India is following the Israeli model of Jewish settlements in the occupied West Bank where systematically it has altered the demographic ratio by reducing the Palestinian majority. Presently, in the Valley of Kashmir, the Muslim population accounts for 90% which the BJP government intends to slash in the coming 10 years by patronizing non-Muslim settlements and creating conditions that will compel the Muslim population of the Valley to migrating to either Jammu or Pakistan. It is on these grounds that the two former Chief Ministers of Indian occupied J&K Farooq Abdullah and Mehbooba Mufti after their release from long detention rejected any possibility of accepting Indian occupation unless the BJP government reverses the abrogation of article 370 and 35-A and restores the special status of J&K. But, it seems it is their wishful thinking because the Modi regime has disregarded protests, demonstrations and other acts of defiance by Kashmiri Muslims against the unilateral acts of August 5, 2019. The Indian Supreme Court where several petitions are laying for months challenging the abrogation of article 370 and 35-A is in no mood to process such cases thus providing New Delhi enough time and space to further consolidate its hold, particularly over the Valley.

Second, pessimism and gloom which prevails in J&K may sustain because India is in no mood to resolve the age-old issue of J&K through a process of dialogue. In fact, India argues that dialogue can be held with Pakistan over its alleged occupation of AJK, Gilgit, and Baltistan. The composite dialogue which was an opportunity for India and Pakistan to discuss the contentious issue of J&K is suspended for the last several years and there is no likelihood for their resumption in the near future. In view of the intransigent Indian stance on J&K and the failure of the international community to exert pressure over India to reverse its unilateral acts of August 5, 2019, there is little likelihood of a breakthrough as far as the conflict over Jammu & Kashmir is concerned. Third, the failure of Pakistan to exert pressure over India by rendering practical support to Kashmiri resistance groups including the Jammu and Kashmir Liberation Front (J&KLF) is a case in point. Only providing diplomatic support to the cause of Kashmir will not make any difference as far as forcing India to capitulate by reversing the revocation of article 370 and 35-A along with the withdrawal of its 600,000 military and para-military force is concerned. J&KLF was prevented last year October to cross the Line of Control in order to express its solidarity with their beleaguered counterparts under the Indian occupation of J&K particularly the Valley. If Pakistan is genuinely interested in salvaging the Muslim majority population holed up in the occupied Valley then it should come forward by rendering practical support to them without any fear or consideration. But, the governing elites of Pakistan are aware of the fact that any type of military support to the Kashmiri resistance groups would invite Indian retaliation leading to an all-out war with their eastern neighbor which Islamabad is not willing. Without sacrificing their comfort zones and privileges neither the military nor the political elites can achieve their objective to transform J&K into a part of Pakistan. Third, neither Pakistan nor the Kashmiri diaspora tends to play a significant role to expose India’s illegal acts of August 5, 2019, or exerting international pressure on New Delhi. According to the charter of the UN, any member can request to call a special or special emergency session of the General Assembly if there is a threat to peace. As far as the UN Security Council is concerned, at the request of China, an informal closed-door session of Council was held a few months ago which merely discussed the Kashmir issue but passed no resolution. In the absence of an effective role of UN, International Court of Justice, and Organization of Islamic Cooperation to compel India to restore the special status of J&K and end repres- sion particularly in the Valley, one cannot see light at the end of the tunnel.

Furthermore, polarization in the Indian-occupied J&K reached its peak when on November 17, Home Minister Amit Shah accused the followers of the People’s Alliance for Gupkar Declaration which was signed on August 4, 2019, to safeguard special constitutional of Jammu & Kashmir. He called Congress, National Conference of Farooq Abdullah and Mehbooba Mufti of People’s Democratic Party anti-state and anti-national by demanding the restoration of article 370. It seems the lives of the people of J&K wouldn’t change for the better because of Modi regime’s rigid stance vis-a-vis reversing the unilateral steps of August 5 and the stand- off between India and Pakistan on resolving the Kashmir conflict. In that case, the status of J&K would remain in limbo in the years to come particularly when there is no policy change on the part of New Delhi; Pakistan is unable to play a leadership role challenging India’s illegal acts of August 5, 2019 and alleviating the plight of the beleaguered Muslim population particularly in the occupied Valley of Indian occupied Kashmir.