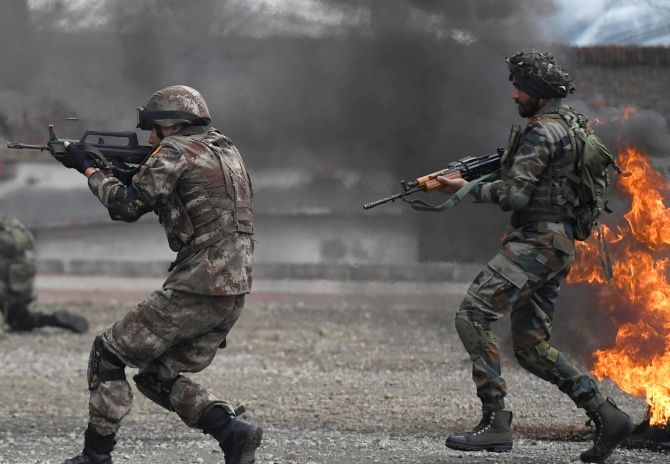 Delhi: Indian and Chinese troops have clashed on their disputed Himalayan border, the first known incident between the two nuclear-armed Asian powers in nearly two years.

In a statement, India’s Ministry of Defense said soldiers from both sides sustained minor injuries in the face-off, which took place Friday in the Tawang Sector in India’s northeastern territory of Arunachal Pradesh, a remote, inhospitable region that borders southern China.

Indian troops prevented their Chinese counterparts from entering Indian territory on Dec 9 during a border scuffle  that led to injuries on both sides, Indian defence minister Rajnath Singh told parliament on Tuesday, as Beijing assured the situation was “stable” in the border region and called on New Delhi to “together uphold peace”

The 2,100 mile-long 3,379-kilometer disputed border has long been the source of friction between New Delhi and Beijing, with tensions escalating sharply in June 2020 when hand-to-hand fighting between the two sides resulted in the deaths of at least 20 Indian and four Chinese soldiers in Aksai Chin-Ladakh.

“The ensuing faceoff led to a physical scuffle in which the Indian Army bravely prevented the PLA from transgressing into our territory and compelled them to return to their posts,” Singh said, adding there were no serious injuries on the Indian side.

In its earlier statement, the Indian Defense Ministry said both sides “immediately disengaged from the area” and the countries’ respective commanders there held a flag meeting to discuss the issue in “accordance with structured mechanisms to restore peace and tranquility

Singh said that meeting occurred Sunday and the Chinese side was “asked to refrain from such actions and maintain peace and tranquility” along the border. The issue was also being addressed through diplomatic channels, he added.

Speaking to Parliament last week prior to the skirmish, Indian Foreign Minister Subrahmanyam Jaishankar said there had been “abnormality” in China-India relations in recent years due to border concerns, and that New Delhi “diplomatically” had been “very clear” with China that they “will not tolerate attempts to unilaterally change” the LAC.

In Beijing, foreign ministry spokesman Wang Wenbin said that he believed the situation was now calm but gave no details of what happened or whether Chinese troops were injured.

“As far as we understand, the China-India border situation is stable overall,” Wang said, adding the two sides “maintained unobstructed dialogue on the border issue through diplomatic and military channels.”

He added: “It is hoped that the Indian side will advance in the same direction as China, earnestly implement the important consensus reached by both leaders, strictly abide by the spirit of the agreements and accords signed by both sides, and together uphold the peace and tranquility of the China-India border region.”

The fight was the first between the two countries since deadly clashes in June 2020 when Indian and Chinese troops were involved in hand-to-hand combat in the Galwan Valley of Ladakh, abutting the Chinese-held Tibetan plateau.

The incident led to the death of 20 Indian soldiers and four Chinese troops.