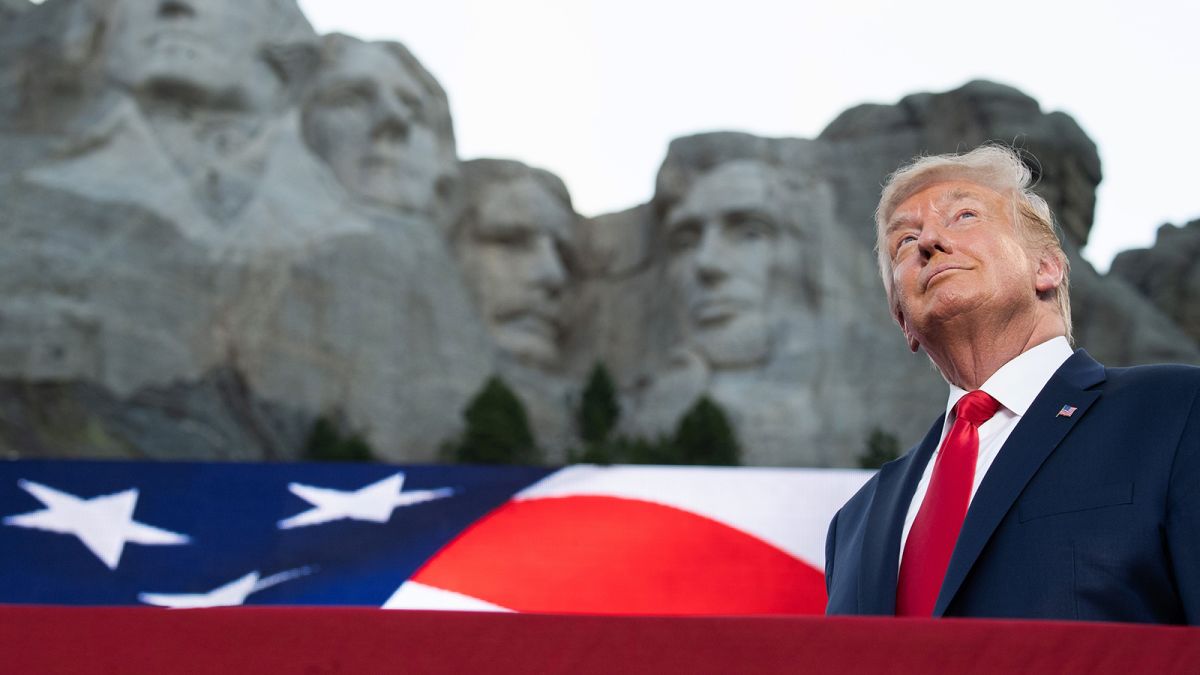 At noon on Wednesday, President Donald Trump’s term will end. It’s been a whirlwind four years, so what might the legacy be of such a history-making president?
There’s a lot to consider, so we asked the experts to break it down for us.
Responses have been edited for length and clarity.

‘His relationship with alt-right’

Matthew Continetti is a fellow at the American Enterprise Institute, focusing on the development of the Republican Party and the American conservative movement.
What’s Trump’s key legacy?
Donald Trump will be remembered as the first president to be impeached twice. He fed the myth that the election was stolen, summoned his supporters to Washington to protest the certification of the Electoral College vote, told them that only through strength could they take back their country, and stood by as they stormed the US Capitol and interfered in the operation of constitutional government.
When historians write about his presidency, they will do so through the lens of the riot.

They will focus on Trump’s tortured relationship with the alt-right, his atrocious handling of the deadly Charlottesville protest in 2017, the rise in violent right-wing extremism during his tenure in office, and the viral spread of malevolent conspiracy theories that he encouraged.

What else stands out to you?
If Donald Trump had followed the example of his predecessors and conceded power graciously and peacefully, he would have been remembered as a disruptive but consequential populist leader.
A president who, before the pandemic, presided over an economic boom, re-oriented America’s opinion of China, removed terrorist leaders from the battlefield, revamped the space program, secured an originalist (conservative) majority on the US Supreme Court, and authorized Operation Warp Speed to produce a Covid-19 vaccine in record time.

‘A surrender of global leadership’

Laura Belmonte is a history professor and dean of the Virginia Tech College of Liberal Arts and Human Sciences. She is a foreign relations specialist and author of books on cultural diplomacy.
What’s Trump’s key legacy?
His attempt to surrender global leadership and replace it with a more inward-looking, fortress-like mentality. I don’t think it succeeded, but the question is how profound has the damage to America’s international reputation been – and that remains to be seen.
The moment I found jaw-dropping was the press conference he had with Vladimir Putin in 2018 in Helsinki, where he took Putin’s side over US intelligence in regard to Russian interference in the election.
I can’t think of another episode of a president siding full force with a non-democratic society adversary.
It’s also very emblematic of a larger assault on any number of multilateral institutions and treaties and frameworks that Trump has unleashed, like the withdrawal from the Paris climate accord, the withdrawal of the Iranian nuclear framework.

What else stands out to you?
Trump’s applauding Turkish President Recep Tayyip Erdogan and Brazilian President Jair Bolsonaro and meeting with North Korea’s Kim Jong Un, really turning himself inside out to align the US with regimes that are the antithesis of values that the US says it wants to promote. That is something that I think was really quite distinctive.
Another aspect is extricating the US from any really assertive role in promoting human rights throughout the world, and changing the content of the annual human rights reports from the State Department and not including many topics, like LGBT equality, for instance.

‘Putting democracy to the test’

Kathryn Brownell is a history professor at Purdue University, focusing on the relationships between media, politics, and popular culture, with an emphasis on the American presidency.
What’s Trump’s key legacy?
Broadly speaking: Donald Trump, and his enablers in the Republican Party and conservative media, have put American democracy to the test in an unprecedented way. As a historian who studies the intersection of media and the presidency, it is truly striking the ways in which he has convinced millions of people that his fabricated version of events is true.
What happened on 6 January at the US Capitol is a culmination of over four years during which President Trump actively advanced misinformation.
Just as Watergate and the impeachment inquiry dominated historical interpretations of Richard Nixon’s legacy for decades, I do think that this particular post-election moment will be at the forefront of historical assessments of his presidency.

What else stands out to you?
Kellyanne Conway’s first introduction of the notion of “alternative facts” just days into the Trump administration when disputing the size of the inaugural crowds between Trump and Barack Obama.
Presidents across the 20th Century have increasingly used sophisticated measures to spin the interpretation of policies and events in favorable ways and to control the media narrative of their administrations. But the assertion that the administration had a right to its own alternative facts went far beyond spin, ultimately foreshadowing the ways in which the Trump administration would govern by misinformation.
Trump harnessed the power of social media and blurred the lines between entertainment and politics in ways that allowed him to bypass critics and connect directly to his supporters in an unfiltered way.
Franklin Roosevelt, John F Kennedy, and Ronald Reagan also used new media and a celebrity style to connect directly to the people in this unfiltered way, ultimately transforming expectations and operations of the presidency that paved the path for Trump.

Mary Frances Berry is a professor of American history and social thought at the University of Pennsylvania, focusing on legal history and social policy. From 1980 to 2004, she was a member of the US Commission on Civil Rights.
What’s Trump’s key legacy?
In what he did with judges, Trump has made a long-lasting change over the next 20 years, 30 years in how policies will stand up to legal tests and how they’re able to be implemented – no matter what any particular president or administration proposes.
The courts are controlled by the Republican appointees. Sometimes judges surprise us, but for the most part, the historical evidence is that they pretty much do what their politics and their backgrounds say they will do.

What else stands out to you?
When he supported that package of measures that helped particular people in the black community, like the First Step, pardoning people at the same time that he supported an amendment in the appropriations bill that gave a whole bunch of money to historically black colleges and universities for the first time.
He put all of these things together, as well as having the first stimulus programme making sure that black businessmen and entrepreneurs get some of those loans they’ve had trouble getting before.
The effect of all of that, which we will see over time, was in the midterms, a lot more young black men voted for Trump than before. And if that’s a trend, it may help the Republican party.

Margaret O’Mara is a history professor at the University of Washington, focusing on the political, economic, and metropolitan history of the modern US.
What’s Trump’s key legacy?
Contesting a very constitutionally and numerically clear election victory by Joe Biden.
We’ve had plenty of really unpleasant transitions. Herbert Hoover was incredibly unpleasant about his loss, but he still rode in that car down Pennsylvania Avenue at the inauguration. He didn’t talk to Franklin Roosevelt the whole time, but there still was a peaceful transfer of power.
Trump is a manifestation of political forces that have been in motion for a half-century or more. A culmination of what was not only going on in the Republican party but also the Democratic party and more broadly in American politics – a kind of disillusionment with government and institutions and expertise.

What else stands out to you?
Trump is exceptional in many ways, but one of the things that really makes him stand out is that he is one of the rare presidents who was elected without having held any elected office before.
Trump may go away, but there is this great frustration with the establishment, broadly defined. When you feel powerless, you vote for someone who’s promising to do everything differently and Trump indeed did that.
A presidency is also made by the people that the president appoints, and a great deal of experienced Republican hands were not invited to join the administration the first go round.
Over time, his administration has diminished to a band of loyalists who are really not very experienced and are ideologically uninterested in wise governance of the bureaucracy. What has happened within the bowels of the bureaucracy is going to be a slow slog to rebuild.

‘Standing up to China’

Saikrishna Prakash is a University of Virginia Law School professor focusing on constitutional law, foreign relations law, and presidential powers.
What’s Trump’s key legacy?
The last gasps of his administration are the most consequential, as he exerts control over his most devoted followers and he’s talking about running again.
He forced people to consider what the presidency has become in a way that wasn’t true I think either during the Bush or Obama administrations. Issues like the 25th Amendment and impeachment hasn’t been thought of since Bill Clinton, really.
It’s possible that people now when they think of the presidency are perhaps going to adopt a different stance going forward, knowing that someone like Trump could come along.
It’s possible that Congress will delegate less to the president and take away some authority.

What else stands out to you?
The president has demonstrated that there’s a constituency who’s opposed to a lot of these trade deals and that there are people willing to vote for those who will either extricate us from these trade deals or “make them fairer”.
The president has also suggested that China has been taking advantage of the United States in ways that are deleterious to our economic and national security – and I think there’s a consensus behind this view. No one wants to be accused of being soft on China, whereas no one cares if you’re “soft” in Canada, right?
I think people are going to fall all over themselves to be tougher or at least say they’re tougher on China.
Domestically the president had a populous tone to him. It wasn’t ever fully realized in his policies, but we see more Republicans adopting populist ideas.