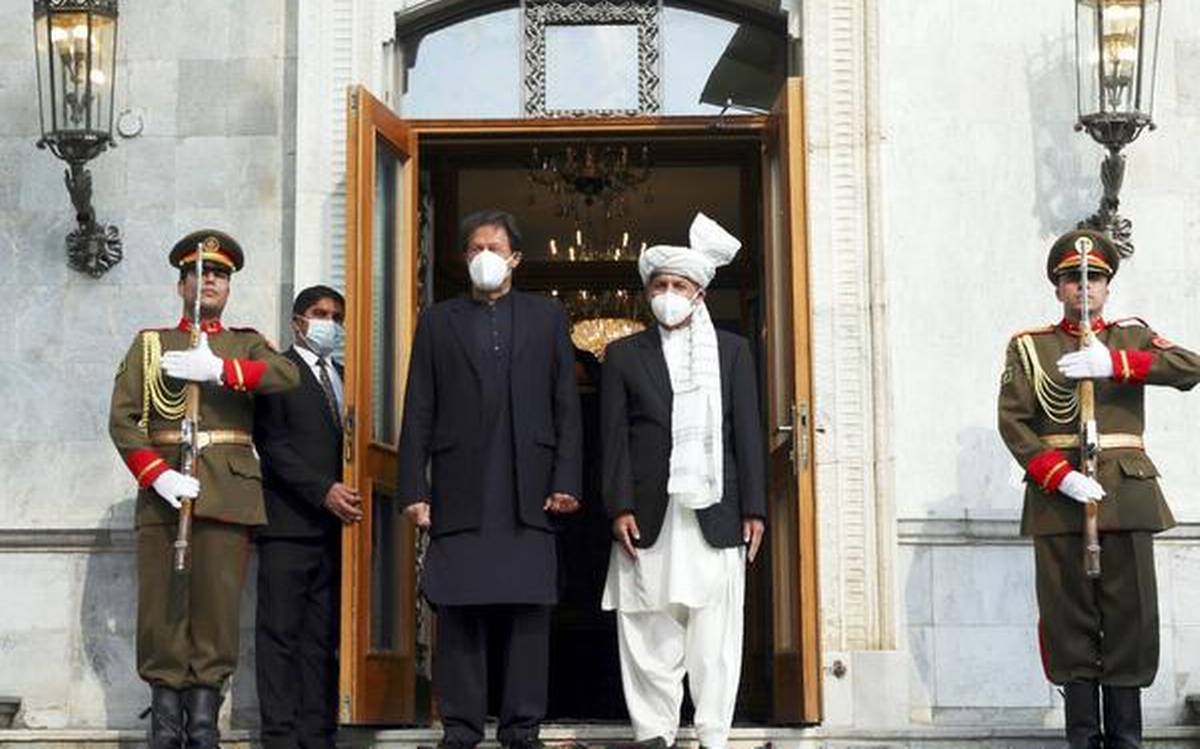 Pakistan’s clout with the Afghan Taliban is by turns a blessing and a curse for Islamabad. Both the United States and Afghanistan are quick to appreciate Pakistan’s cooperation when something in their dealings with the Afghan insurgent group goes right.

However, both Washington and Kabul are equally quick to turn on Islamabad when there is a foul up – blaming the country’s military for ‘supporting’ the group that has killed and maimed thousands of Afghans since the US invasion of that country in 2001.

This is the backdrop against which Prime Minister Imran Khan’s maiden visit to Kabul must be seen – although its immediate context is an impasse on the intra-Afghan peace process initiated under the Doha accord.

The Taliban have set the condition of the formation of an interim Sharia-based government in Kabul, while the Afghan government insists on a comprehensive ceasefire before pushing forward with the peace process.

In Afghanistan, there is a strong perception at both official and public levels that Taliban militants, since their launch in 1996, continue to enjoy support from the Pakistani security apparatus.

Pakistan on the other hand holds Kabul responsible for the mayhem and bloodshed its tribal belt has seen over the past two decades.

The day after the massacre of around 150 students and teaching staff at Army Public School in Peshawar in December 2014, the then Chief of Army Staff General Raheel Sharif had flown to Kabul. Flanked by his Inter-Services Intelligence (ISI) chief, he shared a dossier with the Afghan officials regarding the use of Afghan soil in that attack and demanded the handing over of the then TTP chief Mullah Fazlullah to Pakistan.

More recently, a visit by Afghanistan’s chief peace negotiator Abdullah Abdullah to Pakistan in September aimed at bridging the gap between two neighbors with a history of antagonism was declared successful. But the visitor could not restrain himself from tapping into the decades-old mantra when he urged the Pakistan military to use its influence over the Taliban to reduce the level of violence in Afghanistan.

Prime Minister Imran Khan clearly focused on the positive side of things at the joint presser with the Afghan leadership at the conclusion of his Kabul visit on 19 November 2020 when he said: “Pakistan will do everything possible to help reduce violence in Afghanistan and establish durable peace.”

The four-point Doha peace accord lays down a 14-month deadline for US and NATO troops’ withdrawal from Afghanistan; assurance by the Taliban fighters not to let their land be used to threaten US security; initiation of intra-Afghan talks by 10 March 2020; and a complete ceasefire.

Eager to honor his promise of pulling US service personnel out of Afghanistan, President Trump is adamant on a sizable troop drawdown before he hands over reins of power to Democratic President-Elect Joe Biden on 20 January 2021 – although the deadline for the comprehensive withdrawal is 29 April 2021.

With the withdrawal of 2,000 troops from Afghanistan by 15 January 2021, the number of US troops in Afghanistan will decline to 2,500.

The US withdrawal, nevertheless, hinges on a complete ceasefire and success of intra-Afghan dialogue, originally scheduled to start on 10 March 2020 but was delayed for six months and was finally held in Doha on 12 September 2020.

The main hurdle in the way of the intra-Afghan dialogue was the release of six Afghan Taliban prisoners, believed to be involved in killing ISAF troops. The Taliban seem to have had the upper hand of the haggling as they finally succeeded in getting their six men released from the captivity of the Afghan government. The insurgent group came to the negotiating table only after their men were shifted to Qatar to remain in their custody instead of the Afghan government’s.

The ceasefire clause of the Doha Agreement seems to be of little consequence to the Taliban. Just three days before the intra-Afghan dialogue, Afghan Vice President Amrullah Saleh narrowly escaped a deadly roadside bombing in Kabul that killed ten people.

On the other hand, unlike President Trump, the US President-Elect Joe Biden seems in no hurry to withdraw the forces from Afghanistan. In that case, the law and order situation in Afghanistan would remain the same, if it does not deteriorate further.

Biden clearly expounded his view of the matter from the campaign trail: “Americans are rightly wary of our longest war; I am, too. But we must end the war responsibly, in a manner that ensures we both guard against threats to our homeland and never have to go back.”

If the Biden presidency does indeed push the pull-out further into the future, the Taliban fighters may also intensify their guerrilla warfare in Afghanistan, dashing hopes for peace and prosperity in Afghanistan.

Recently, talking to Afghan President Ashraf Ghani, NATO Secretary-General Jens Stoltenberg assured: “We support the Afghanistan peace process and as part of it we’ll continue to adjust our presence.”

The visit of Imran Khan has been welcomed in Afghanistan and the people have pinned high hopes on Pakistan’s role in the restoration of peace in Afghanistan. How far it goes towards overcoming the traditional Afghan mistrust of Pakistan – especially after renewed reports of Islamabad’s efforts to install a friendly Taliban government in Kabul – remains to be seen.

From all appearances, Pakistan is set to come under immense international pressure in the days to come to convince the Taliban to soften their demands and take the intra-Afghan dialogue to a logical end. If Pakistan is unwilling or unable to deliver on that count, the game of allegations and counter-allegations is sure to start all over again.

Pakistan would be demanded to distance itself from Taliban, and Islamabad’s unwillingness to do so may compound its problems. In particular, Pakistan can ill afford to displease Washington given its dependence on US for its dealings with both the IMF and FATF.

No matter how the circumstances unfold, the warring sides of Afghanistan would do well to realise that the key to peace in that country is held by Afghan hands. There can be no peace in Afghanistan unless both Kabul and the insurgent group are prepared to make compromises for peace. There is nothing the US or Pakistan can do to change that.

The sooner the Afghans realise this, the better.

Co-hosted by the governments of Finland and Afghanistan and the United Nations, the two-day 2020 Afghanistan Conference concluded in Geneva on 24th November with a commitment by the international community to support the Afghan shared development objectives for 2021-2024.

The Afghan government succeeded to get the pledges from the international community to the tune of $3.3 billion for the first year which will continue in the upcoming four years.

The communique issued at the end of the conference, however, called for “an immediate, permanent and comprehensive ceasefire.” In addition, it also underlined the need for a meaningful peace process with the participation of women and youth, as well as ethnic, religious, and other minorities.

“Preserving democratic pluralism, the constitutional order, institutional transparency and accountability, and the rule of law, further promoting human rights and fundamental freedoms, especially for women, children and minorities and including freedom of media, and pursuing sustainable peace, development and prosperity, are essential for Afghanistan’s future”, it said.