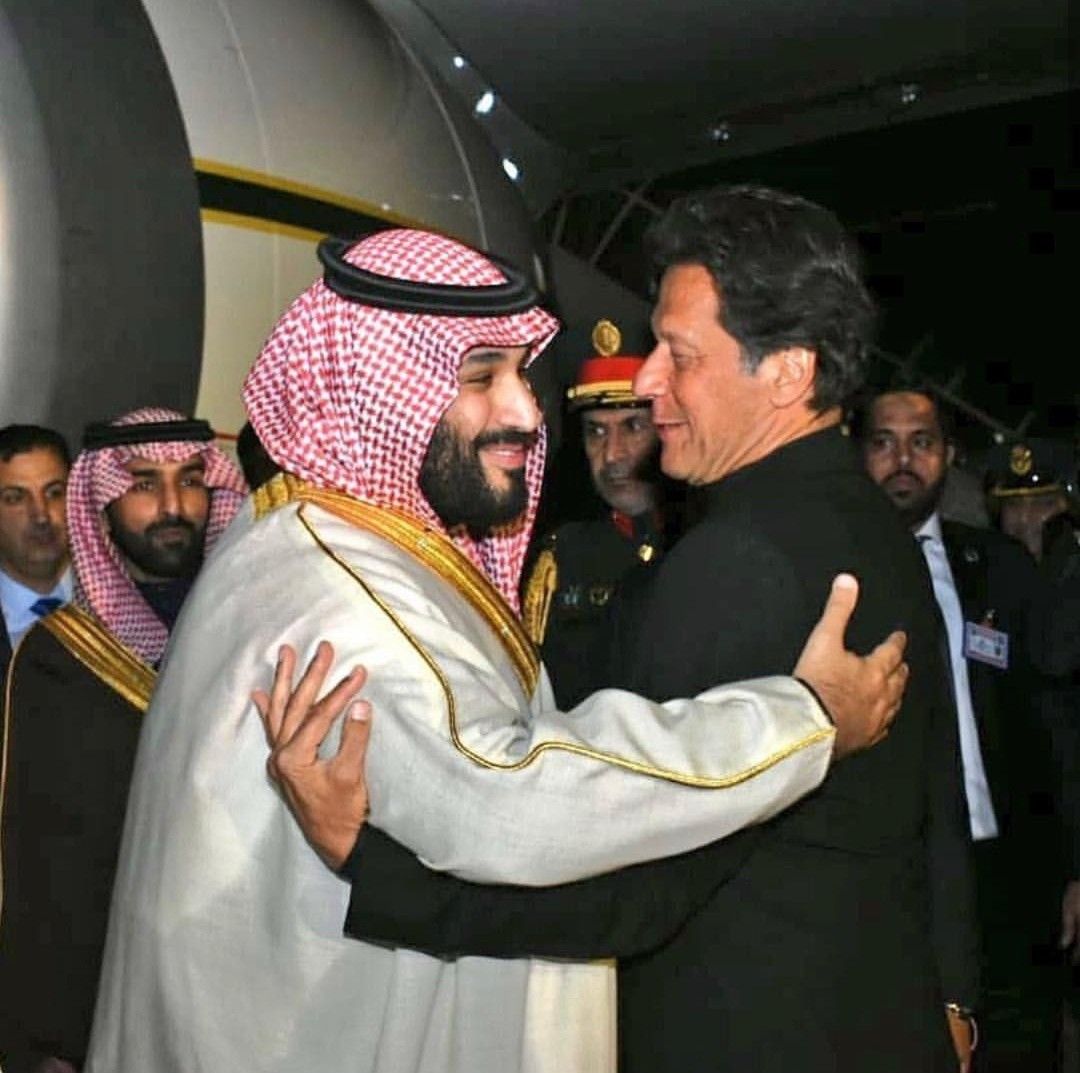 Recent years have seen an unusual strain in the traditionally close relations between Pakistan and monarchies of the Gulf Cooperation Council. Over India, Iran, and Israel, and over Turkey and Yemen, the preferred policies of Islamabad and the Gulf monarchies have repeatedly diverged since the mid-2010s. The Pakistan-Gulf relationship has often been influenced by extant concerns about other parties – especially mutual neighbour Iran.

The relationship with the Gulf states is often touted as a particularly Islamic link. Certainly Islam plays a role, especially regarding the Haramain in western Saudi Arabia. But it does not explain why the Gulf, in particular, has been so attractive a partner for a Pakistan whose relations with other Muslim countries have been far more mixed. Bahrain, for instance, is hardly more Islamic or for that matter more Arab than Iraq.

Several other factors suggest themselves. Firstly, the rentier economies of the Gulf, whose own populations are relatively modest, attract both technical and menial labour from Pakistan. Secondly, Pakistan’s military ranks highly in the “Global South”, among whose states it has often provided military support; the Gulf states, with their impressive wealth and unimpressive militaries, are thus a prime market. A third reason is geopolitical: Pakistan has repeatedly found itself sharing enemies with some Gulf monarchy or other.

At Pakistan’s independence from Britain, the Arabian Peninsula was under British rule – with the major exceptions of Saudi Arabia and the smaller southern monarchies of North Yemen and Oman. Oman, with a sizeable Baloch population, also had among its Indian Ocean holdings the Baloch port Gawadar until 1958, when it was sold to Pakistan. Muscat had been particularly reliant on Britain against Saudi raids on its border. In the earliest episode of a recurring pattern, Omani sultan Saeed bin Taimour started to employ Pakistani troops among his guard. These included their commander, Sakhi Raja, who narrowly beat off an assassination attempt against the sultan.

Britain approved the Oman-Pakistan link as well as Pakistan’s major project of the 1950s – the Baghdad Pact between Pakistan, Turkey, and the monarchies of Iran and Iraq, each fearful of Soviet influence on their northern border. Pakistan tried to persuade Saudi Arabia to join, but its monarch Saud bin Abdul-Aziz – closer to the Washington than London – was flirting with a dalliance with Egypt, whose rivals included Turkey, and thus refused. The Baghdad Pact soon turned out a damp squib after a military coup unseated the Iraqi monarchy and with it the coalition’s seat.

The increased insecurity of Arab monarchy, as epitomized by the Iraqi coup and another coup against the North Yemeni imamate in 1962, prompted Riyadh to distance itself in the 1960s from Egypt, whose adoption of socialism galled the monarchies. This chill peaked when Egypt and Saudi Arabia backed opposite sides in the North Yemen war. Aiming to counter Egyptian regional influence abroad, Saudi ruler Faisal bin Abdul-Aziz emphasized, funded, and supported pan-Islamic themes, which fit neatly with both Pakistani self-perception and interests.

Politically further than Egypt but geographically closer as a threat to the monarchies was a Marxist trend that suddenly emerged in the southern Arabian Peninsula. In the late 1960s a Marxist coup took newly independent South Yemen and threw its support behind a small but stubborn insurgency in Oman’s Zufar province. Both Riyadh and the British-protected sheikhdoms of the Gulf, who had backed earlier revolts against Saeed, balked at this latest episode. Because Britain was on its way out, these princes hurriedly prepared for the aftermath. Not only did they fear Marxists, but the fact that Oman had invited Iranian forces to Zufar also unnerved the sheikhs, who feared that Iran’s imperial monarchy would dominate the region.

Increased clout and opportunity: Pakistan and the Gulf in the 1970s

This led to a flurry of action in the 1970s. Hoping to placate popular antipathy, Omani crown prince Qaboos overthrew his father Saeed, with the approval of the other Gulf sheikhs. Kuwait had been independent since 1961; in 1971 Bahrain, Qatar, and the United Arab Emirates followed suit. Their insecurity prompted a need for military expertise, which Pakistan eagerly supplied. The Bahraini navy was founded, and led for a decade, by future provincial governor-general Captain Khalilur-Rahman from Pakistan. The Emirati airforce was dominated by Pakistani officers – including its first five commanders, Sadaruddin, Ayaz Khan, Ghulam Haidar, future Pakistan airforce commander Jamal Ahmad, and Feroz Khan. And ties with Saudi Arabia flourished, as Faisal quietly bankrolled the Pakistani nuclear program.

Yet Pakistan did not share Gulf fears about Iran. To the contrary, the Iranian monarchy remained a prized supporter against both the Soviets and Baloch rebels, whom Tehran helped Pakistan defeat in the mid-1970s. Zulfikar Bhutto was related and particu- larly close to Iranian royalty, and attempted to mediate between Tehran and the Gulf. Thus their cooperation in the 1973 oil block- ade suited Pakistan well. The resultant boom in the Gulf economy drawn in an enormous expatriate population of Pakistani workers, both technical and manual labourers.

But any illusions that the oil blockade represented a genuine coalition soon collapsed as both Iran and Saudi Arabia entered a furious bidding race, essentially over who would be the United States’ closest regional partner after Israel; this competition was given an edge by Tehran’s friendliness to Israel as opposed to Arab rejection. Eventually, it was an internal uprising that lost the Iranian monarchy this contest. Yet the resultant clerical regime led by Rohollah Khomenei proved more dangerous.

Pakistan and the Gulf amid revolution and wars

When Iraq escalated the stakes by invading Iran in the early 1980s, the Gulf monarchies formed a political-economic coalition to safeguard their interests. But the coalition’s military vulnerability became evident in 1982 when Iran ousted the Iraqi army, and – rejecting a panicky Saudi offer of reparations in return for peace – invaded Iraq and thus came within a hairsbreadth of the Gulf. Pakistan again filled the military void; the ensuing decade saw the closest links yet with the Gulf.

At about the same point as the Iranian monarchy was overthrown, Bhutto had been toppled by a more conventional method – a military coup led by Mohammad Ziaul-Haq. The opposition included, among others, Shia groups backed by Iran; Ziaul-Haq’s brand of conservative Islam was far closer to the Gulf than to revolutionary Iran. Shortly after the Iranian invasion of Iraq, Pakistan dispatched a large military force to garrison the Saudi city Tabouk, soon led by future army commander Jehangir Karamat. They remained till 1987 when Ziaul-Haq refused a Saudi directive to purge Shia troops following a Saudi crackdown on Shia pilgrims in Makkah.

Saudi friendship was not without costs, tending to back Ahli Hadith sectarian groups in the region much as Iran backed Twelver groups and exacerbating sectarian tensions in Pakistan. Iran and Pakistan replicated this in Afghanistan, backing different insurgent groups against the Soviet occupation. This competition spiralled in the 1990s, eventually resulting in Iran’s support for a militia coalition against the Taliban emirate backed by Pakistan. Along with Pakistan, Saudi Arabia and the Emirates offered diplomatic recognition to the emirate, only withdrawing it in 2001 when the United States invaded.

Pakistan and the Gulf during the Twenty-First Century More dangerous for the Gulf was the American invasion of Iraq in 2003, which was backed by Iran and brought its militias again to the Gulf. American troops had garrisoned Saudi Arabia for a decade by then, since the brief Iraqi conquest of Kuwait. Though Iraq had been routed in 1991, the Gulf powers had feared that Iran would benefit and lobbied Washington not to topple the Iraqi regime. Their fears materialized in 2003; to add insult to injury, American forces blithely used Kuwait and Qatar as expeditionary launchpads. After a brief Saudi attempt to back a Sunni Arab insurgency, the Gulf states instead opted to protect themselves against Iran by drawing closer to the United States and making it their protector.

Relations between the Gulf and Pakistan meanwhile persisted; military dictator Pervez Musharraf was close to the Saudis, who mourned his ouster in 2008 and disdained his successor Asif Zardari. The 2013 election of conservative prime minister Nawaz Sharif, historically close to the Gulf, gave them more room for optimism. They were thus indignant when Pakistan abstained from entering their war in Yemen. This campaign, a Gulf affair planned by crown princes Mohammad bin Salman and Zayed of Saudi Arabia and the Emirates respectively, targeted the pro-Iran Houthis who had seized northern Yemen. Abu Dhabi was particularly histrionic and upgraded its relations with India to positive romance.

Once more Pakistani military clout maintained the link. Pakistani mercenaries had already assisted the Gulf campaign in Bahrain against a Shia uprising in 2011. Now recently retired army commander Raheel Sharif took over a military coalition founded by bin Salman – a symbolic role whose main purpose seems to have been to influence Riyadh. Though bin Salman – given clout by the large Pakistani expatriate population he ruled – successfully intimidated Islamabad from a Turkey-Malaysia coalition in 2019, Saudi Arabia refrained from following the Emiratis from openly condemning Pakistan. The Gulf powers also condemned the Indian annexation of Kashmir.

Yet Pakistani links with Iran also slowly improved; not only had Zardari enjoyed solid relations with Tehran, but Pakistan made no attempt to stop Shia militants from joining Iran’s paramilitary forces. Moreover, the resurgence of Baloch secessionism, largely supported by American-occupied Afghanistan, in both countries gave them a further basis to cooperate. Pakistan and, to a lesser extent, Iran supported the Taliban insurgency, but Gulf diplomacy also entered the fray. Both Saudi Arabia and an increasingly assertive Qatar attempted backroom negotiation efforts between the Taliban and the United States.

More contentious was the 2017 Emirati-Saudi blockade against Qatar, which split the Gulf coalition and lasted until this past week, as well as the Emirati-Bahraini rapprochement with Israel. The unprincipled bin Zayed has lobbied hard to embrace Tel Aviv. Such a move would be massively unpopular in most of the Muslim world, not least Pakistan; even Riyadh has refrained from joining suit. Both Saudi Arabia and Pakistan lack the security and convic- tion in this controversial step that a cushioned and heavily autocratic Abu Dhabi can afford. Given that Arab-Israeli rapprochement hinges heavily on mutual fear of Iran’s nuclear program, such a step would also risk for Pakistan hostility against a sizeable, litigious, and dangerous neighbour with nuisance value. On both principle and pragmatism, the Emirati line falters.

Pakistan’s long history with the Gulf has not been without its tensions. But a combination of frequent mutual enemies and friends, and in particular the marriage between Gulf economic and Pakistani military clout has helped the partnership survive Pakistan’s political upheavals and the Gulf ’s recent partisan splits. Its major tension remains an Iran that is both the scourge of the Gulf but an unavoidable, interdependent neighbour of Pakistan.

Ibrahim Moiz is a writer on politics and history. He graduated from the University of Toronto and studies modern history in the Muslim world, particularly in Afghanistan and Syria.