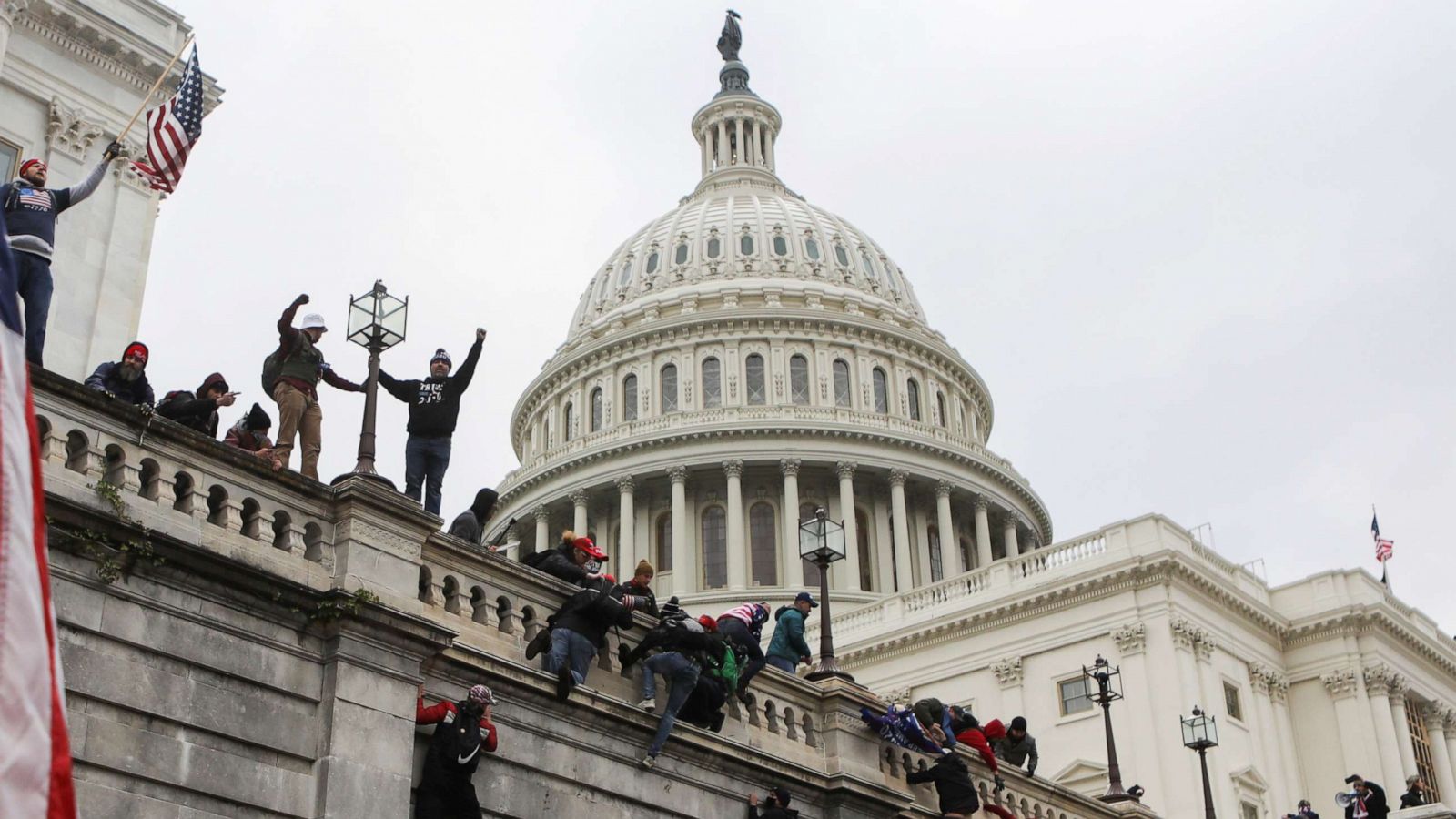 January 6, 2021 will go down as “a black day” in the history of the USA. The storming of the Congress on Capitol Hill by a crowd of “terrorist thugs” at the behest of the President of the USA appalled the world and reduced the “oldest democracy” in the world to a laughing stock.

The US has prided itself on being the “shining city on the hill,” the “New Jerusalem,” the aspiration of peoples all over the world, “the melting pot of the world,” the land God has blessed “from sea to shining sea,” America the Beautiful, the Home of the Free and the Land of the Brave”, the natural leader and exemplar for the rest of the world, etc.

While obviously couched in patriotic superlatives this description did not sound so ridiculous to many people around the world for much of US history. It was indeed a fabled land of opportunity, many freedoms, and where no dream was considered impossible. Its constitution articulat- ed the values of the European Enlightenment and the political philosophies of John Locke, Baron de Montes- quieu, Jean-Jacques Rousseau, etc. The welcoming poem by Emma Lazarus inscribed on the Statue of Liberty said it all to those who sought to realize their dreams in America: “Give me your tired, your poor, your huddled masses yearn- ing to breathe free. The wretched refuse of your teeming shore. Send these, the homeless tempest-tost to me. I lift my lamp beside the golden door.”

Nevertheless there was always the “dark side” of America. It was founded on the progressive genocide of the Native Americans which was by and large, directly and implicitly, endorsed by White Churches. The country, moreover, was largely built and developed on the basis of Black Slavery whose victims were hunted, bound and transported from Africa, often by Arab Muslim slave traders, across the Atlantic to America. The Founding Fathers who wrote the much admired US Constitution were mostly slave-holders.

For census purposes the US Constitution counted Afro-American slaves as only three-fifths of a person. After the American Civil War and the abolition of slavery so-called Jim Crow laws continued to limit the rights and freedoms of former slaves. Moreover, with the develop- ment of the US economy and the emergence of Compra- dor Capitalism wage slavery became the norm which was in some ways worse than actual slavery since the capitalist owner had much less interest in the survival of his wage slaves than previous slave owners who bought their human slaves and had an economic interest in their physical survival.

Apart from genocide and slavery, the third factor in the emergence of the US as a powerful state at home and abroad was war and violence abroad beginning with Latin America and gradually spreading to other areas of the world. Nevertheless, the US was by and large able to pose as an anti-colonial and anti-imperialist country which had successfully thrown the British out, and this played a signifi- cant role in the generally positive perception of the US by many political leaders whose people and native lands had been colonized and settled by European imperialist countries. The US often appeared to be understanding and even supportive of the freedom struggles of the people against their colonial masters. On this basis the US was able to co-opt many of the political elite of post-colonial devel- oping countries as allies and friends in the Cold War against the Soviet Union and, to a lesser extent, China on the one hand, and as beneficiaries of international corporate capitalism against the economic and social interests of their own people, on the other.

These two contradictory but complementary aspects of the US continued until the end of the 1970s when the Reagan era in the US and the Thatcher era in the UK commenced in opposition to the democratic liberalism of the Democratic Party in the US and the democratic socialism of the Labour Party in the UK. By the twenty-first century, political conservatism in the US degenerated into political populism reinforced by racism in response to immigration from developing countries which successfully competed for low paid service and highly paid hi-tech jobs. In addition, US Corporations began to export manu- facturing jobs to low wage developing countries abroad.

The Democratic Party in the US moved rightwards, away from the post-war New Deal Keynesian economics, to occupy what was once the moderate Republican stance, while the Republican Party ceased to be a political party and, instead, became an “insurgency” of the far right that was enraged by the export of manufacturing jobs which were its bread and butter. Industrial belts became rust belts. The Republicans began to recruit the extremely conservative but hitherto relatively non-political Evangelists to their cause. They thereby gave a religious cover to their increasingly racist politics and resentment against college educated CEOs who tended and pretended to be Democratic liberals while moving towards an elitist and exclusive conservatism of the super-rich.

It was the instinctive genius of Trump to take advantage of the hypocrisy of both major parties in order to sell his political snake-oil of instant solutions to all the political, economic and social grievances of the inhabitants of the Bible, corn and manufacturing belts of America. They had been taken for granted and ignored by the establishments of both major parties. Trump, who had no political ideology other than himself, found it easier to take over the relatively unsophisticated Republican Party by serving the interests of its fellow billionaire corporate bosses while pretending to lead an insurrection by its political base.

The problem turned out to be that Trump was an unstable egotistical maniac and a narcissistic child who could not contain his whims and sought to hide his governing incompetence through bullying, lying and showmanship. Nevertheless, had it not been for his disastrous mismanagement of the COVID-19 pandemic he would have won a second term since he was able to transform himself from a snake-oil salesman into a charismatic cult figure for almost half the electorate. While this may testify to his political genius it also testifies to the extraordinary political naiveté of the American people and the perversity of its political system. January 6 exemplified this ugly truth. The soft political power of America appears dead for the moment without which its undoubted military and economic power will be severely compromised.

Will January 6 turn out to be a turning point for the US? Will it turn towards healing the disastrous political polarization that has been deepening over the past 40 years? Or will the polarization further deepen towards a second civil war and a conceivable break-up of the US? The danger is that the US under the nonde- script leadership of the likely one-term Biden Administration will neither have the courage to prosecute Trump nor rise to the domestic challenge of consensus re-building. It will instead find it easier to distract domestic attention and build temporary enthusi- asms for campaigns against alleged threats from China, Russia, Iran, the Muslim world, etc. Such a kinetic policy would ensure increased trillions of dollars in profits for the Corporate-Mili- tary-Media-Government complex, still greater inequality and police brutality, and a continuing refusal to finance a Green New Deal which is the only way to keep at bay the imminent and irreversible prospect of global climate and environmental disaster.

The US must return to being a more or less functioning democracy, which it has long ceased to be if its global influence is to be restored. The two-party system and first past the post in collecting state electoral votes in Presidential elections are now serious obstacles to the kind of domestic reforms that are essential for the US to be a viable democracy, and a possible role model for the world in the 21st century. Moreover, the role of money in the outcome of elections in the US has to be seriously reduced if democracy is to be anything other than a hoax and a pretence. Trump’s packing of the Supreme Court will need to be countered by increasing the number of Supreme Court judges for this to be possible. Once again Biden, who is as beholden to Wall Street as previous presidents were, is unlikely to do much in this regard. All he may be counted on doing is to restore a measure of courtesy and decency in the conduct rather than the content of policymaking and implementation. That will never be enough to halt and reverse the fatal trends in the current US and global developments.

In this article:Donald Trump, Impeachment, US Capitol, US Capitol Violence, USA

The writer is a former ambassador to the US, India and China and head of UN missions in Iraq and Sudan.