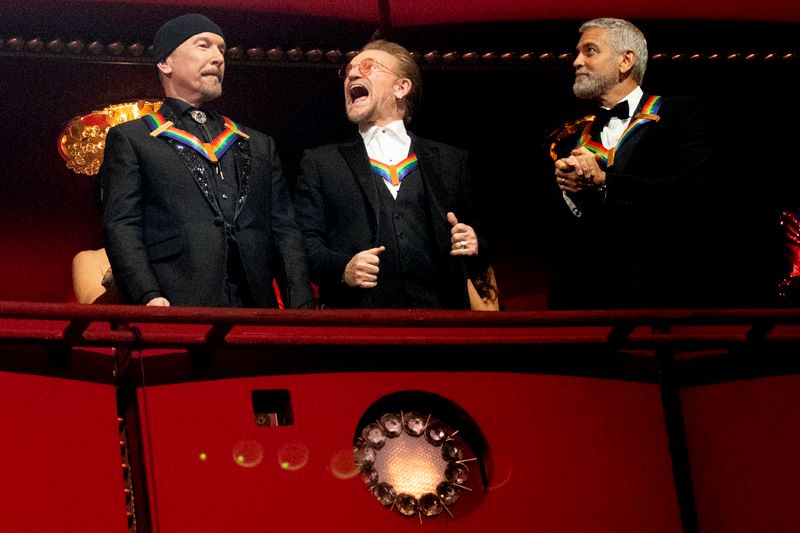 The John F. Kennedy Center for the Performing Arts Washington, announced George Clooney among this year’s honorees. The annual Kennedy Center Honors awards have been held over the course of 44 years.

The gala event honoring the recipients is seen as a cultural and society highlight in Washington and was often attended by American presidents in years past. The awards recognize the very best of the American creative culture.

Knight, Clooney, Grant, León and U2 were all celebrated at the John F. Kennedy Center for the Performing Arts which annually honors a select group of people for their artistic influences on American culture.

President Joe Biden, Vice President Kamala Harris and their respective spouses were in attendance, as were members the President’s Cabinet and Congress.

Julia Roberts showed her support for George Clooney at the prestigious Kennedy Center Honours by wearing a custom dress adorned with his face. The honorees expressed their delight at receiving recognition at this level.

“To be mentioned in the same breath with the rest of these incredible artists is an honor,” Clooney said in a statement.

“Never in my wildest dreams did I imagine ever receiving this prestigious Kennedy Center Honors. Through the years, I’ve watched so many of my heroes serenaded by colleagues and fellow artists,” said Amy Grant.

Gladys Knight said she was “humbled beyond words to be included amongst this prestigious group of individuals, both past and present