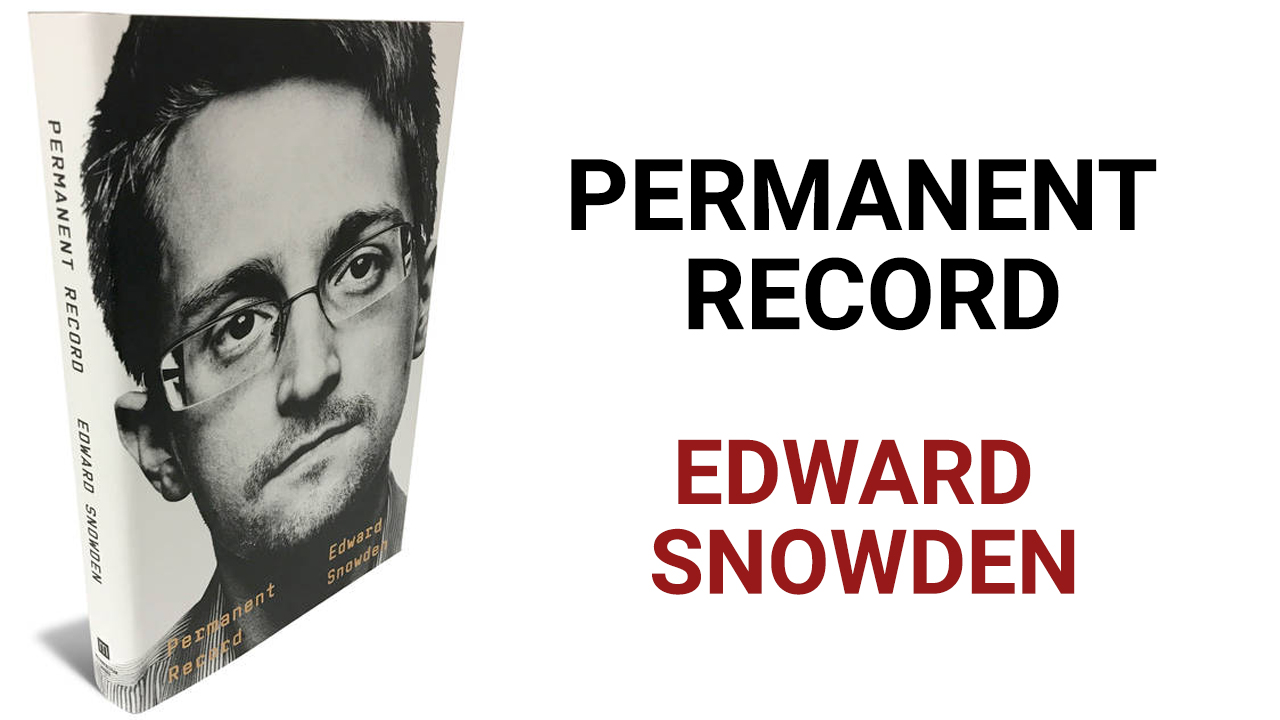 In the wake of the catastrophe of 9/11, monitoring and surveillance morphed into the daily lives of citizens worldwide, but the extent to which this surveillance advanced, was beyond the comprehension of the wide public at the helm of this scrutiny. In this regard, only an insider could reveal the tyranny of these agencies to associate clearly what and how these objectives were being undertaken. Edward Snowden not only accepted it as his responsibility but also paid a heavy price by being stripped of his badge of national identity as well as his comfort and ease – driving him to this exposé.

Permanent Record is a riveting tale of a young boy intrigued by the peculiarities of technology more specifically computers. Disillusioned by the system of grading that was laid out in front of him, he initiated his journey of hacking by cracking the code to pass through without having to submit his homework. The early chapters of the book explain in detail how this young boy, introverted and geeky, developed a unique thought process through his passion for computer games and cyberspace.

Allegations regarding his true agenda reflect clearly in the book where Snowden tries to defend his patriotism by discussing his ancestry, not just in a passing manner, but in, significant detail. It is commemorated as a story of an individual who was so deeply engrossed in cyberspace that it not only became his constant companion but his first love, rather than just a pastime hobby. Snowden hints that it was through IT learning, that he understood the mindset of the people, as well as the universal community. He attributes it to the reason behind his choice of partner and credits it to helping him understand and analyze the systemic problems within his country. It was perhaps due to his lapse in one on one communication that it took him ten years to truly perceive the truth behind the works of the establishment.

The story is built with amusing anecdotes that provide accurate insight into his mind, attempting to explain his current standing. As a teenager, he logged onto the website of a research laboratory where he stumbled upon a security loophole. He called them up and left them a message apprising them of it, until sometime later, when he was approached by a man offering him a job in their company, which he declined since he was pretty busy at high school. Such incidents intricately woven together in this book, depict the journey of the man that he became.

He sells himself as an individual who was relentlessly unaccepting of the status quo and gives us a peephole through which we can delve into the worlds constructed by the establishment. His ingenious passion for IT as the knife and intriguing, spy-like nature as its razor-sharp edge, cuts through the American security establishment, exposing the cross-section in a way any educated layman can understand. The details he provides manifest the need to inform the ordinary global citizen of the havoc that the security is wreaking upon such victims, especially post 9/11.

The intelligence and information that is neatly embedded within this book help the reader realize why there was a sudden, deliberate shift towards communication and related technologies by the United States in the eighties when they emphasized the need to focus and prioritize these for the next two decades. Their motives and objectives were shredded to pieces by Snowden’s leaks in 2013 which in some ways, was fueled by the crisis in 2008. In his words, it sowed the seeds of populism across Europe and America, the testament of which manifested that the misery of the people was in fact extravagantly beneficial for the elite- what may be described as the turning point in Snowden’s life.

However, this was not the first time he made such a drastic move. Following 9/11, he responded to the incident by signing up for the army as a way to serve his country, despite opposition from his parents. It was not until he had a bad fall and was invalidated that he actually spearheaded his way through his incredible computer skills, which till that point were more a matter of love than a field of profession to be pursued. Once amidst the secret keepers, he felt betrayed and deceived by the invasion in Iraq. ‘

he writes. He failed to understand why secrets were kept from the secret keepers themselves. But he continued to struggle. As a systems analyst, he acquired high prestige and power as the sole person who could decipher the systems of cyber intelligence. At full liberty to propose projects, he assimilated how the National Security Agency whilst technologically advanced, was intrinsically weak in its security systems. Similarly, while it led the path to cyber intelligence, it was smeared by obstructions and obstacles on its way to cybersecurity. He also cracks open the dilemma of metadata which is a sharp contrast of actual content when it comes to surveillance, by projecting behaviors and habits as the permanent record to be castrated and conjured in times of need – an objectionable manner of handling control over monitoring.

Permanent Record comes at a time when news of Snowden’s prosecution is rife with speculation. It is a crude source of information that attempts to unveil the atrocities advocated through artificially maneuvered intelligence. Nevertheless, it is not only an expose of the exploitation and enslavement that is backhandedly progressing but also encompasses shards of details of his personal life, his family, the love of his life Lindsay and his years before and after the exile. It is a scintillating tale of a man who transcended the normalcy of human nature and presented himself as a sacrifice to attempt to rid the world from the onslaught of technological advancement and poor cybersecurity. It also appears to be a testimony of a man who loved his country beyond measure and could not see it withering and faltering from the rights and liberties it assigns in its constitution.

With the discrepancy of information in-sight of his six years long exile, Permanent Record looks to respond to questions and queries seeping in from all across the globe. It looks to explain, distinguish, and elaborate upon the need to be secure, safe, and informed whilst living amid such a technologically induced environment.  It does not dictate but harnesses the mind to become absorbent and open to these harrowing realities. According to Snowden, no movement, action or word escapes the watchful eye of the security establishment, which conclusively suggested in his own words ‘is the result of two decades of unchecked innovation – the final product of a political and professional class that dreams itself your master. No matter the place, no matter the time and no matter what you do, your life has now become an open book’.