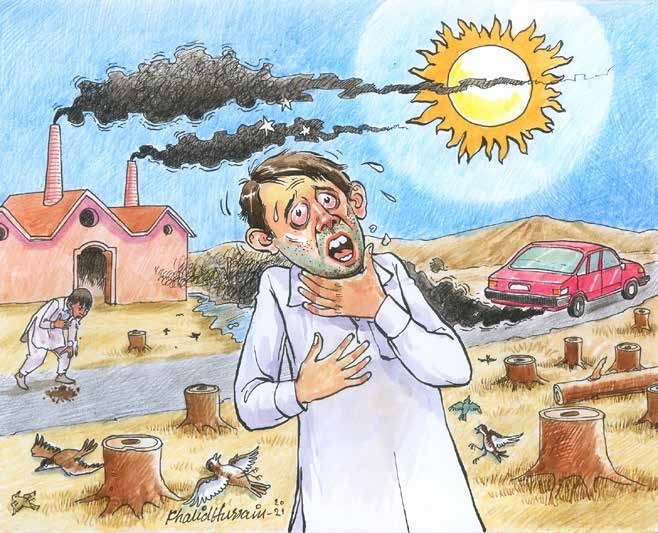 In March 2017, when the parliament passed the law on climate change, the concerned minister told the Senate that although ranked 153rd in terms of greenhouse gas emitting countries, Pakistan was the seventh most vulnerable country to climate change.

This dispelled all illusions that climatic change was an issue for the rich and wealthy countries and that poor and developing countries like Pakistan had other concerns and issues to deal with.

The United States and China top the ranking of countries emitting greenhouse gases,  which are leading to heating up of the atmosphere, in turn causing irreversible changes in the earth’s climate. There is a consensus among international scientists that the new climate changes that are taking place primarily because of carbon emissions are not reversible and could lead to a situation where human spice itself could be endangered.

Thanks to our low level of industrialization, Pakistan ranks 153 on the list of those countries which are responsible for carbon emission and hence climate change. But there are no doubts that we would be worst affected by climate change.

Pakistani narrative with regards to the threat of climate change usually revolves around the description of extreme weather conditions that could afflict Pakistani society and territory as the planet earth heats up – water shortage, droughts, submerging cities, ecological changes or agro-based crises.

These are the buzzwords in the vocabu- lary of Pakistani experts and officials while describing all the possibilities that could result from the impact of climate change. The world, however, has come to a stage where experts and scientists are predicting a doomsday scenario for the human kind.

“Now for the bad news: 2.5 degrees of warming will still be catastrophic for many people and countries, and 3 degrees even more so”, reads a report of an international organization on climate change. “Heat waves will become unbearable without air conditioning, even in high latitudes. All coral reefs will probably die. Many major cities will be drowned. Even just 2 degrees of warming, which will be exceeded in any business-as-usual scenario, will have very serious global repercussions”.

But this doomsday scenario is not simply for the top polluters like China and the United States and the industrialized Europe. This is as true for the poor, less carbon emitting countries like Pakistan.

Extreme weather conditions and natural calamities caused by extreme weather conditions have become a new normal in the area that forms Pakistani territory. Torrential rainfall in Pakistan claimed hundreds of lives in the flash flood since 2014 across Pakistan while causing widespread property and infrastructure damage. Unprecedented floods in Karachi threw the port city into chaos. Residential and commercial areas were submerged, and power outages disrupted life for days.

The Arabian Sea has also been heating up, with the average surface temperature increasing from 29 degrees Celsius (84.2 Fahrenheit) to 31 degrees in just two years. This has fuelled the formation of storms that push the sea into coastal communities. “The Indus River delta has been badly affected by sea intrusion that harms people’s livelihoods,” reads a report.

The official didn’t mention the names of those places where these hotspots were developing. Nor did he mention what the government of Pakistan was doing to cope with the situation. This however is an extremely depressing situation as it would possibly involve the migration of a large segment of the Pakistani population.

Experts also point out that Pakistan will either face continuous drought or sudden heavy rainfall as we witnessed in Karachi last year. It will affect the annual pattern of rainfall. It could cause six months of rain to fall in one or two days, leading to devastation, as happened in Karachi last monsoon. This could possibly destroy the agriculture sector of Pakistan’s economy.

“Global warming will result in glacier melt. Pakistan has more glacial ice than anywhere on earth outside the Polar Regions with 7,253 known glaciers. Though these glaciers seem a blessing, since they provide about 75 percent of the stored-water supply in the country, they can easily turn into a great natural disaster due to global warming.

There are signs that glaciers in Gilgit-Baltistan and Chitral are slowly melting down. This will cause sea-level rise, landslides, avalanches, and glacial lake outburst of flood (GLOF). The creation of Attabad Lake in Gojal Valley Hunza in 2010 and the death of 140 soldiers and civilians in the Siachen glacier region in 2012 were a result of landslides and avalanche, possibly caused by climate change.

The Pakistan government still is in the process of establishing a bureaucratic structure to become the official infrastructure for the enforcement of climate change laws. At present national institutions like the Environmental Protection Agency (EPA) have been a miserable failure in this connection.

Experts and scientists agree on the point that Pakistan would be made to pay for the sins of industrialized nations like the United States, China, Japan, and Western European states. But our own decision to carbonize our energy options by constructing coal plants in Punjab will by no means play a small part in bringing these calamities on us.

Equally important is how Pakistan balances its climate change and energy policies. While electricity is imperative for the daily functioning of human life in contemporary time, carbonising its production by choosing coal-powered plants is a death sentence to climate change mitigation.

A lot of work needs to be done to mitigate these concerns, but climate stewardship by civil society is by far the most impactful factor, which alone can guarantee sustained policy and action through political transitions.