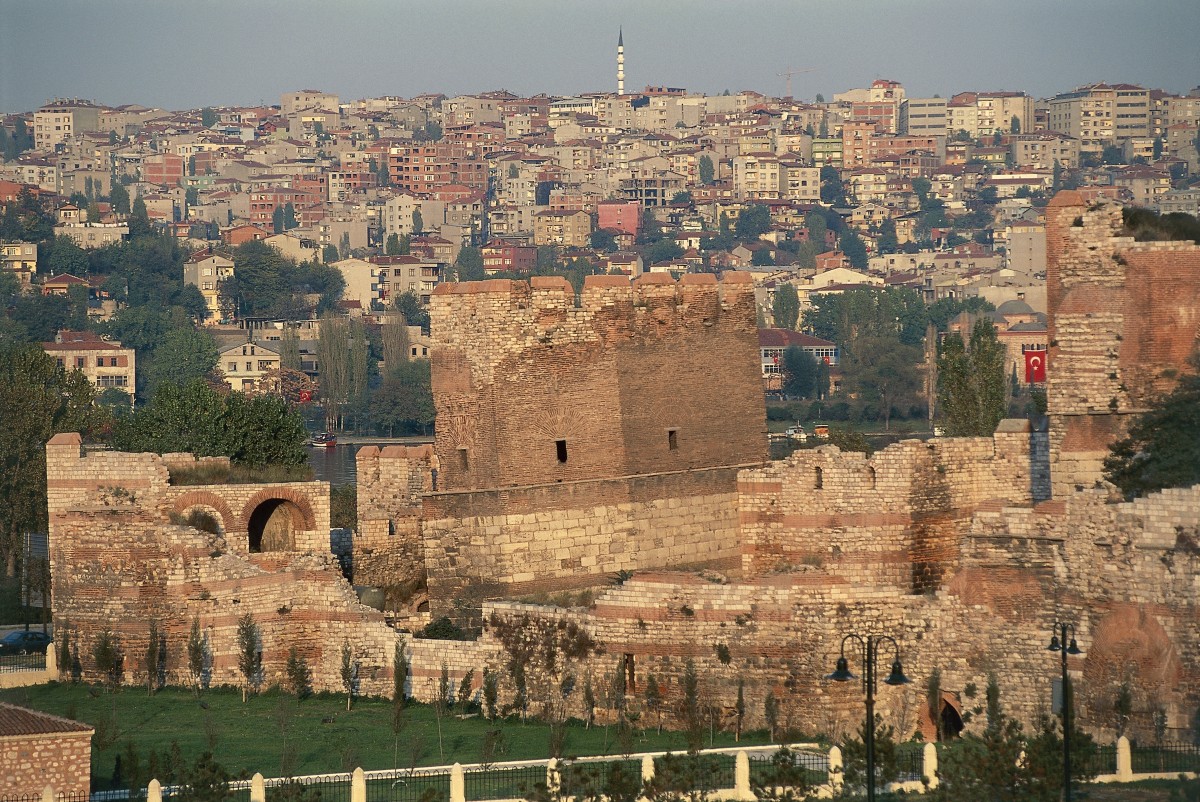 Why do international analysts raise alarm about Ottoman legacy whenever President Erdogan of  Turkey speaks out against oppression in Palestine, Rohingya or Kashmir? Why does an economically stable Turkey reflecting upon its Islamic past haunt the region surrounding Turkey?

To find answers to questions like these, let us peep into 1453, and be part of the army of the young Sultan Muham- mad – the 21-years-old monarch charged with the fervour of Prophet of Islam’s Hadith, “One day Constantinople will be conquered. Great is the commander who conquer it. Great are his soldiers.”

As he prepared his land and naval forces for the challenge, the Sultan got the world’s largest cannon built by the Hungarian gun maker Orban, whose bid was too high for the cash strapped Byzantine King Constantine XI.

The Sultan was looking for a cannon which could breach the three-walled fortress of the Byzantine Constantinople, famed as the jewel of the world.

Despite the two-and-a-half feet diameter cannonballs visiting destruction on the fortifications, the siege extended to fifty-five days with almost daily military and naval engagements. It took the extraordinary feat of Turkish naval ships sliding overland bridge of oiled wooden planks into the Golden Horn to overcome King Constantine XI, who defended the city valiantly and laid down his life on 29 May 1453.

When Europe was passing through the middle ages, the Iberian Peninsula Muslim Spain (711-1492 AD) was the intellectual lighthouse of Europe till the year 1492, when the Muslims were ethnically cleansed and expelled.

Martin Luther’s Protestant revolt in 1517 against Catholic exploitation embroiled European powers in religious wars which lasted till the late eighteenth century. Ottoman rule spread from Anatolia to Eastern Europe, Middle East and North Africa during the reigns of her first ten outstanding Sultans from Usman Bey (1299-1327) to Suleiman the Magnificent (1512-1520).

The Ottoman Navy established its dominance in the Mediterranean under the Admiralty of Khairuddin Barbarossa. Sultan Selim I, brought Egypt and Hejaz under his rule and was also handed over Khilafat from Abbasids.

The Ottoman Empire was a multinational, multiethnic, multilingual empire controlling most of Southeastern Europe, Central Europe, parts of Eastern Europe, Western Asia, the Caucasus, North Africa and the Horn of Africa.

The Ottomans’ spectacular expansion was due to her Warrior Sultans of the first three centuries. They developed a very advanced system of governance with Central and Provincial Administrations. Sultans were advised by their Divan (cabinet), headed by the Grand Vizier. The ruling nobles were called Askeri.

The main administrative branches at the centre were the military, the courts, and the clergy. The judicial and executive branches were separate. The Kazi was the Chief Judge who could hear both civil and military cases.

The Sultan’s mother was head of the harem, where all the royal females, concubines, and slave girls lived. Sultan’s wife was second in command. The harem had its own schools for education and training. If the new Sultan were too young, Valida Sultan would be the de facto ruler.

Reaya were the taxpaying lower classes, and below them were the slaves, both males and females. Slavery was legal all over the world back then.

Janissaries were the world’s first organized standing army units created by the second Sultan Orhan Ghazi (1327-1362). They formed the Sultan’s elite fighting force. The rest of the cavalrymen (Sipahis) were managed through Timar system – a system in which projected revenue of a conquered territory was distributed in the form of tempo- rary land grants among Sipahis and other members of the military class including Janissaries and other slave warriors of Sultan. Instead of pays, the earnings were the compensa- tion of their services.

Ottoman forces were the first ones in Europe to use gun powder and matchlock muskets. Besides foreign minister and finance minister (Raes ul Kitab), there were tax collec- tors. Tax farming was prevalent in the first three centuries, a system where collection of agricultural tax was outsourced to notables of regions.

Accordingly the operators of the masjids served as the headmas- ters of the mekteps. Medical and engineering schools were also introduced 1830s onwards.

The empire continued to maintain a flexible and strong economy, society, and military throughout the 17th and much of the 18th century. However during a long period of peace between 1740 and 1768, the Ottoman military system fell behind their European rivals, the Habsburg and Russian Empires.

The Ottoman stagnation could be attributed to royal fratricide, i.e., killing of Sultan’s brothers to eliminate the threat to the ruling Sultan.

Janissaries became more interested in power struggles at Istanbul than far off war fronts. Meanwhile, a resurgent Europe equipped with mass education due to printing press, industrialization and mass production of military equipment became ever stronger financially and militarily.

Enlightenment, French and Industrial revolutions, and secularist revolts against the clergy propelled the once decadent Europe into the modern era, resulting in scientific progress and enhanced military might. Colonies of Europe provided raw material and consumer markets for the newly mechanized Western Europe.

The old Empires with stagnant monarchical systems were no match to the dynamism and military might of Western European onslaught. The Ottoman Empire sat astride the shortest trade routes to African and Asian markets, both for European colonial- ists and Tsar’s Russia.

In diplomatic history, the Eastern Question was the issue of the political considerations of the European Great Powers in light of this. The Eastern Question encompassed a myriad interrelated elements: Ottoman military defeats, Ottoman institutional insolvency, the ongoing Ottoman political and economic modern- ization program, the rise of ethno-religious nationalism in its provinces, and Great Power rivalries, especially Western Europe against Russia.

Britain and France wanted the fruits of Ottoman collapse to fall into their laps exclusively and keep the Russians at bay. Financially weak Ottomans were lured into the Crimean War of 1856. The basis for the war was the struggle to control two of the holiest Churches in Jerusalem between Roman Catholics (French backed) and Orthodox Christians (Russian backed).

Britain, France and the Ottomans won the war but the Ottomans came under European debt and in 1875 declared bankruptcy.

To reverse the decline of Ottoman power, young Turks were sent to Britain, France and Germany for modern education as well as military and administrative trainings in early 1800s.

Upon their return, Young Turks impregnated with western ideas pressured the Khaliah and his government for military, administra- tive and legal reform on the lines of Western institutions, especial- ly, post revolution France.

The Khalifa introduced Tanzimat (meaning reorganizations) reforms between 1839 and 1871. The objectives of the programme included modernization, centralization, increasing revenue and forestalling fragmentation of the empire.

Autonomous regions of Egypt and Syria were infiltrated by Chris- tian missionaries with the permission of Governor of Egypt Muhammad Ali and his son Ibrahim Pasha in Syria. Schools and colleges were established. American University of Beirut started as Protestant College by American missionaries. By the late 19th centu- ry, young Arabs had become more nationalist than Ottomanized.

In 1876, a new round of reforms was introduced by the new Khali- fa Abdul Hamid II, including the arrival of a bi-cameral parliament and an empowered Grand Vizier. However, the Khalifa abrogated the constitution in 1878 and ruled as an Ottoman monarch.

In 1881, a secret society called Committee for Union and Progress (CUP) was established for reinstatement of the 1876 constitution. Young Turks and the CUP infiltrated the army ranks, quietly promoting like-minded members to key posts in military and Administration.

In 1908, Sultan Abdul Hamid II was forced to abdicate since the Sultanate had again gone bankrupt. Sultan Muhammad was made constitutional Khalifa. Elections were held and CUP eventually dominated Turkish politics till the start of WW1.

General Talat Pasha, Enver Pasha and Jemal Pasha dominated the Turkish Politics till the end of WW1 (1918). The trio were respon- sible for Turkey’s Alliance with Germany. Colonel Mustafa Kemal Pasha (later Ataturk) opposed them openly, professing to join the British side.

The alliance comprising Germany, Austro-Hungarian Empire, and the Ottoman Empire was defeated in WWI. British Forces entered Istanbul in 1918 and Ottoman caliphate became subservient to Allied Powers of Britain, France and Russia.