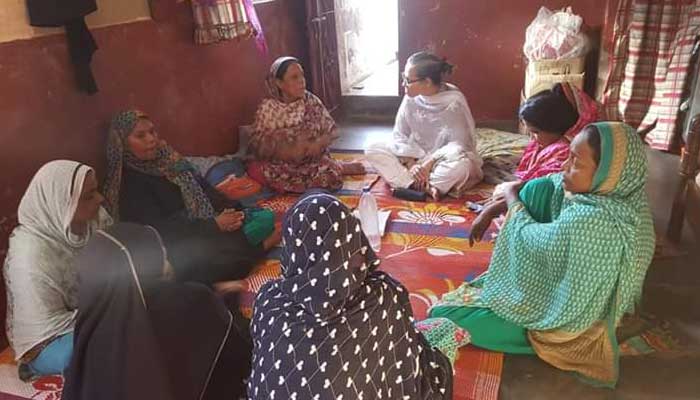 Jameela Abdul Latif will soon be elevated from her hazy status as a home-based worker (HBW) to be counted among Pakistan’s labor force.

“This is truly a historic moment for all of us,” said Latif, who has been working from home embellishing glass bangles for the last 18 years.

The mother of seven (a son and a daughter already married) is optimistic her “struggle for fair wages” is at an end. “The Labour Department will realize the dreadful circumstances we work and live under and will do something to make it easy for us”.

Latif’s three-room rented “quarter” in Hyderabad’s Liaquat Colony is just a stone’s throw from the Choori Bangle Para, the hub of bangle business. Her eldest daughter helps out with work and on a good day, the mother-daughter duo are able to make PKR 120.

On such a day, they work for up to twelve hours to embellish about fifteen sets. A set – comprising four bangles and two karas – fetches between PKR 150 and 550 on the market.

Latif is among an estimated 12 million HBWs across Pakistan, 80 percent of whom are women. These people are a part of this country’s economy, says Zehra Khan, the general secretary of the Home Based Women Workers Federation (HBWWF).

She laments the HBWs’ contribution to the national economy goes unrecognized because they work in the informal sector, which is neither registered nor regulated. The upshot is that these workers remain unprotected by the country’s existing legal or regulatory frameworks.

According to the Labour Force Survey 2017-18, Pakistan’s informal sector (which includes HBWs) accounts for 71.7 percent of the employment outside agriculture with a larger share in rural areas (75.6 percent) than in urban areas (68.1 percent).

Two years ago the Sindh government had passed the Sindh Home-Based Workers Act of 2018 making Pakistan the only country in South Asia to recognise HBWs as workers and labourers.

“Sindh is the leader in progressive welfare legislation,” says economist Kaiser Bengali. “The rest of Pakistan should follow”.

However, the law has remained dormant to date. Fortunately for many women HBWs, all that is about to change.

This January, the Sindh act’s rules were passed under which the first step was for the government to get all the HBWs registered. However, due to lockdown, the labor department was unable to initiate the survey and it was put off until August.

August came and went and still, nothing happened.

Tired of waiting for the provincial labour department to begin the registration drive, Latif and three million HBWs of the province of Sindh decided to take matters into their hands.

Last month, an agreement was signed between the HBWWF, comprising 3,500 members, and the Sindh government’s Labour and Human Resource Department.

But it may take some time as it was important the forms are filled accurately and honestly so that only HBW are included. It will also mean going door to door to inform other women about this registration drive and the benefits attached to it as not everyone is aware of it, explained Khan.

“Through this exercise, the true number of women HBWs will emerge since we have only had estimates up until now” said Khan.

The registrants will then be able to claim social security benefits and minimum living wages, for which the federation had been fighting since 2009 when it was founded.

“Now they exist officially,” concurs Bengali, a former head of Benazir Income Support Programme, but he cautions against over-optimism in terms of protection and privileges that come with governmental recognition, noting these remain missing for formal sector workers.

But Bengali’s skepticism fails to dampen Latif’s spirit. In fact, for her, the victory means “I, too, will get a pension in my old age, like those working in factories.” In addition, she expects access to free healthcare, scholarships to put her kids through college, and monetary support for kids’ marriages or for any other eventuality, even death in the family.

Had the registration gone according to the original plan, says the 55-year old Shamim Bano, she would have been able to avail of free healthcare for her daughter-in-law who has a lump in one of her breasts that needs to be removed.

“She left home and has gone to her mother’s taking the kids with her saying we don’t have money for her treatment. She is right, but it still hurts because she is our responsibility after all,” said Bano, who along with her daughter makes a living cropping off loose ends of the thread to give garments a finished look.

She is not sure the HBWs will get all the promised benefits in her lifetime, but said she was happy to have been in the forefront of the struggle. She hopes she will be remembered when history of the Pakistani HBWs’ struggle is written.

Even 22-year old Shazia Yaqoob, living in Karachi’s Godhra colony, cannot wait to get herself registered as an HBW. “I will be able to complete my studies,” said the young woman who works stuffing baby nap mats with her mother.

For each mat stuffed they get PKR 2.50. “My mother and I stuff and stitch up to 500 mats a day,” said Yaqoob. This means the duo makes earning PKR 1,250 for eight hours of work each day. They also embroider Balochi and Sindhi ladies’ suits.

“Each suite takes us a month and it’s really a strain on my eyes,” she said. And for all that work, they earn PKR 3,000 for an adult suit and PKR 1,200 for a child-sized suit. “We do not haggle much for fear of losing work,” said Yaqoob.

Latif has been haggling with middlemen for fair wages ever since she became a member of the federation eight years ago. “We also fought for unionising, dispute resolution through setting up of arbitration committees and universalisation of security benefits for all, not just HBWs,” she said.

“ [The employers] would always tell me not to bring up the issue of wages in front of other workers as it was getting increasingly difficult to pacify the rest of choori mazdoors,” she said adding they try to “placate us by increasing our rates by 50 paisas annually”.

For the last one year, though, thanks to the relentless struggle waged by women like Latif, the home-based bangle workers are getting the same wages as their factory counterparts.

In addition, these women, many of whom had never stepped foot out of their homes before, have found a collective voice – and they have started to use it to resolve issues including domestic violence, inheritance, and divorce. They have ensured their area’s civic problems are attended to.

“They write applications to the municipality and meeting counsellors and if nothing happens, go to government offices in groups and demand their problems be resolved,” said Khan, and it has always worked

The arrival of the COVID-19 pandemic earlier this year followed by a lockdown of business and the uncertainty surrounding it hit the HBWs hard. The worst part is that they are not eligible for the government’s emergency cash disbursement program because they have still not been registered and do not fall within the category of daily wagers.

“Many among us who were already living hand to mouth and badly needed this hand-holding were not able to gain access to help from the Ehsaas programme,” rued Zahida Perween, 55, the president of the HBWWF.

“I took loans to be able to buy groceries and we were unable to pay house rent of PKR 7,000 or the electricity and gas bills,” said Bano.

The recent skyrocketing food prices have not helped either. Her family of nine (her husband, 2 daughters, 1 son, 1 daughter in law and three grand kids) have also had to cut down on meals.

“We take a late breakfast of tea and bread and skip lunch. Then we have an early dinner,” she said, and quietly added. “But there have been days when we’ve had to go without dinner”.

With no work coming her way, this enterprising woman who never let her circumstances get the better of her has started going to nearby schools to sell home-made samosas during recess. And on Sundays and Tuesdays, she sets up stalls at the weekly bazaars selling undergarments, bangles, and shoes.

Life in the Latif household is not easy either. Recalling the lockdown, she said: “I would make dahi phulki and send my son to sell it in the street. From whatever little he was able to sell, we managed our meals,” said the bangle maker whose health is suffering.

“Some chemical used in my work is causing irritation near the skin of my eye, and my face is all itchy too,” she said. But more than that the electricity and grocery bills and her husband’s poor health cause her immense stress which she said have taken a toll on her heart. “I get medicines for my treatment when I have money to spare. Otherwise it gets neglected,” she said resignedly.

However, despite being in the middle of the second wave of COVID-19 and with food inflation sky high and little work, these HBWs have something to celebrate. “It is a small but important victory,” agrees Bengali, adding, “The larger battle for the human rights of workers must continue”.