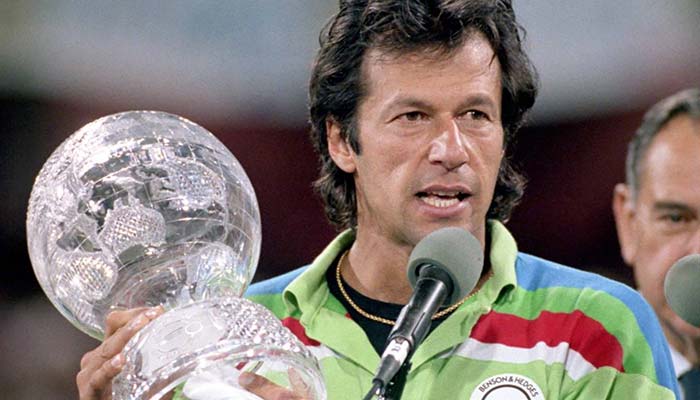 Prime Minister Imran Khan has been named the winner of the United Arab Emirates’ International Sports Personality Award “in appreciation of his efforts to turn Pakistan into one of the world’s leading cricketing nations”.

The winners of the eleventh edition of the Mohammed Bin Rashid Al Maktoum Creative Sports Award were announced on Tuesday at a ceremony. According to the UAE’s official news agency WAM, this is the largest award of its kind in terms of prize money and categories, and the first dedicated to creativity in sports.

The premier has been invited to receive his award at a ceremony to be held at Dubai’s Expo 2020 on January 9, reported Gulf News.

Imran Khan’s profile in WAM, which calls him an “inspirational sports icon”, mentions that “he was captain of the Pakistan team that emerged victorious in the 1992 Cricket World Cup, defeating England in the final”.

“He continues to inspire young people as prime minister now, enhancing the status of sports in general and cricket in particular, and empowering Pakistani society through sports,” says the profile. “Today, half of the country’s 221 million population identify themselves as cricket fans, and nearly 42,000 players are officially registered with the Pakistan Cricket Board.”

Touching upon his efforts towards supporting cricket as the prime minister, the agency mentions Imran Khan’s initiative for the welfare of Pakistan’s youth, launched in 2019, under which young men and women will be given scholarships, including in sports. It also spoke about Prime Minister Imran’s plans to build a cricket ground in each of Pakistan’s 4,000-plus union and village councils.