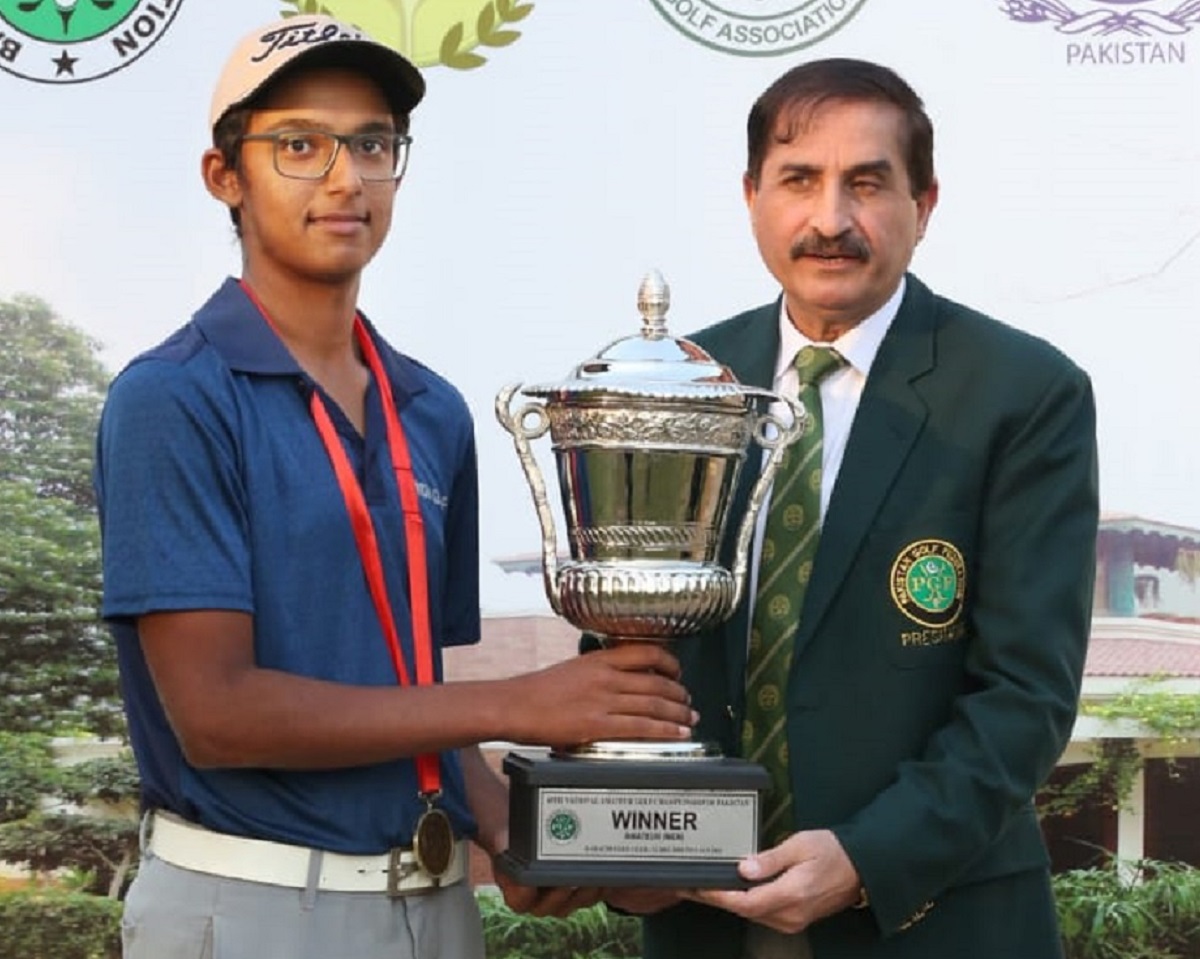 Omar smiled as he took in the acres of green before him at the Karachi Golf Club. Something about these surroundings always brought within him a feeling of calm confidence. Despite his mere 16 years, the lanky golfer, though still unranked, had been regularly playing rounds of 72. Sometimes even better. Some were of the opinion that he could be a dark horse in the tournament.

And was he ever! Omar Khalid did not just win the 60th National Amateur Golf Championship that day, in doing so he also broke Pakistan’s legendary golfer Taimur Hassan’s long-standing record. Hassan, now the Chairman of Asia Pacific Golf Confederation, had been 18 when he first won the national title in 1970. Now Omar has become the youngest, at 16.

Labelled now as the “find of the year” in golf circles, the Karachi-based Omar Khalid is an O-Levels student at Froebel Education Centre. He says that he considers himself quite lucky to have a sports-loving family.

“My father is a sports editor of an English daily and a keen golfer himself. In fact, my mother and younger brother also play golf. The four of us go together to the golf course,” he says.

Still, golf wasn’t his first love. “I fell in love with sports very early. I was playing cricket, basketball and soccer when I was only five. I was totally into cricket. By 10, I was regarded as a good leg spinner among my peers. But then only one year later, I tried my hand at golf,” says the young champion, who then took to golf like a duck to water.

“It was within the first few days on the course that I realised that golf was the sport for me. I started with the beginner’s handicap of 36, but it was only a matter of a few months that I was winning age group tournaments.”

There was no looking back for Omar. “Over the next few years I was victorious in the junior category of major golf tournaments such as the Chief of Naval Staff Open, Sind Golf Association Cup, etc.”

At 13, in 2018, he made his debut in the Faldo Series, the world’s biggest series of junior golf tournaments, which take place in 30-plus countries, involving more than 4,000 golfers each year. “I finished as the runner-up in the boys Under-16 category in Karachi.

“On the basis of my performance in the Faldo Series, only a few months later, the Pakistan Golf Federation selected me for the national team, to feature in the Jack Nicklaus International Junior Championship in Haiku, China,” he says, adding that due to the global pandemic, it remains his sole international appearance.

“I excelled again in the Faldo Series, as the winner and runner-up in the boys U-16 in 2020 and 2021 respectively. On the basis of being No 1 in Pakistan, I had qualified for the Faldo Series Asia Finals, but the event couldn’t be held because of Covid-19. The 2020 British Junior Open in Kent, England, in which I had been selected to represent Pakistan, was also cancelled.”

Up until now, it has been mainly his family’s support that has helped Omar excel in the sport. “Golf is, of course, an expensive sport,” admits Omar. “My family has helped me very much here. Occasionally, I have bought golf equipment, that is clubs, balls and gloves from the vouchers that I received for winning tournaments. A few years ago, the Sind Golf Association also presented me with a golf set, but there has been no sponsorship as yet.”

At age 16, Omar has already made an important decision about his future. “It is very difficult to combine golf and education,” he points out. “So recently, after consulting my parents, I have switched from science subjects to commerce. After completing my O-Levels, I intend joining Nixon College for A-Levels. The college puts great emphasis on co-curricular activities, especially sports, so I am very hopeful to get a scholarship,” he shares.

Omar has an exhaustive and unusual daily routine. “My day starts at 4am. I do my homework before heading to school, as it is the golf course for me in the afternoon. Coming home tired, I immediately hit the hay,” he smiles.

“In July, I intend to play at the Kerry Cup in Waterville, Ireland. There will be some 64 up-and-coming golfers from all over the world competing in individual and team events there. More importantly, the Kerry Cup provides a unique opportunity for accomplished junior golfers like me to be instructed by coaches of elite US colleges and universities, on a one-on-one basis. These coaches also scout the most talented among the participants, for admission into American colleges and universities.”

Omar says that his preferred professional route will, of course, be via some US university. “After completing my A-Levels, I hope to get admission into some good American university, through my golf prowess. One may play for a university team. Doing well at the National Collegiate Athletic Association Division 1 level, means that you are in the run to get the PGA Tour Card, though after clearing more hurdles.”

He also feels that golf is one of the most mentally-challenging outdoor sports. “There is no standardised playing area, and coping with the varied terrains encountered on different courses is an essential part of the game. There are other standard forms of terrain in between, such as the fairway [closely mowed grass], rough [long grass], bunkers [sand traps] and hazards [water, rocks] and each hole on a course is unique in its specific layout and arrangement,” he says.

Hardly a week goes by when there is no big golf tournament in Pakistan. Sponsored by the public or private sector, almost all of them offer good prize money by Pakistani standards. Often, there is even a car to be won if someone scores a hole in one. So, one expects the corporate sector to come forward to patronise this new golf prodigy.

Omar’s certainly exhibited that he has the focus, self discipline and the burning desire to accomplish things, way beyond his young years.

In this article:Chief of Naval Staff, golf, Karachi, Pakistan