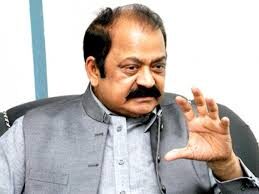 Islamabad: The Interior Minister Rana Sanaullah said the recent terrorist incidents by TTP inside Pakistan should be a matter of concern for Afghan Taliban as the situation is detrimental for regional peace. The federal minister was speaking to media following a review meeting on the overall security situation in the country following a suicide attack in Quetta. He pointed that TTP is enjoying all sorts of facilities in Afghanistan.

The minister viewed rise in terror activities as alarming but the situation not out of control He asked the provincial governments of Khyber Pakhtunkhwa and Balochis tan to address it before the federal government takes the matter in its hands.

In a press briefing, the interior minister stated that Chief Minister KP was not allowed to attend meetings related to law and order, chaired by the Prime Minister, citing that certain things are above politics and that state is more important.

Turning to the domestic crisis, the PML-N leader said that “a group led by a crazy person is bent upon creating anarchy in the country”. Rana Sanaullah said that they are making every effort to destabilize the country.

The minister stated that economies cannot flourish in political uncertainty. ‘When they [PTI] were in government their agenda was to eliminate Opposition and now they are trying to destabilize the country.”