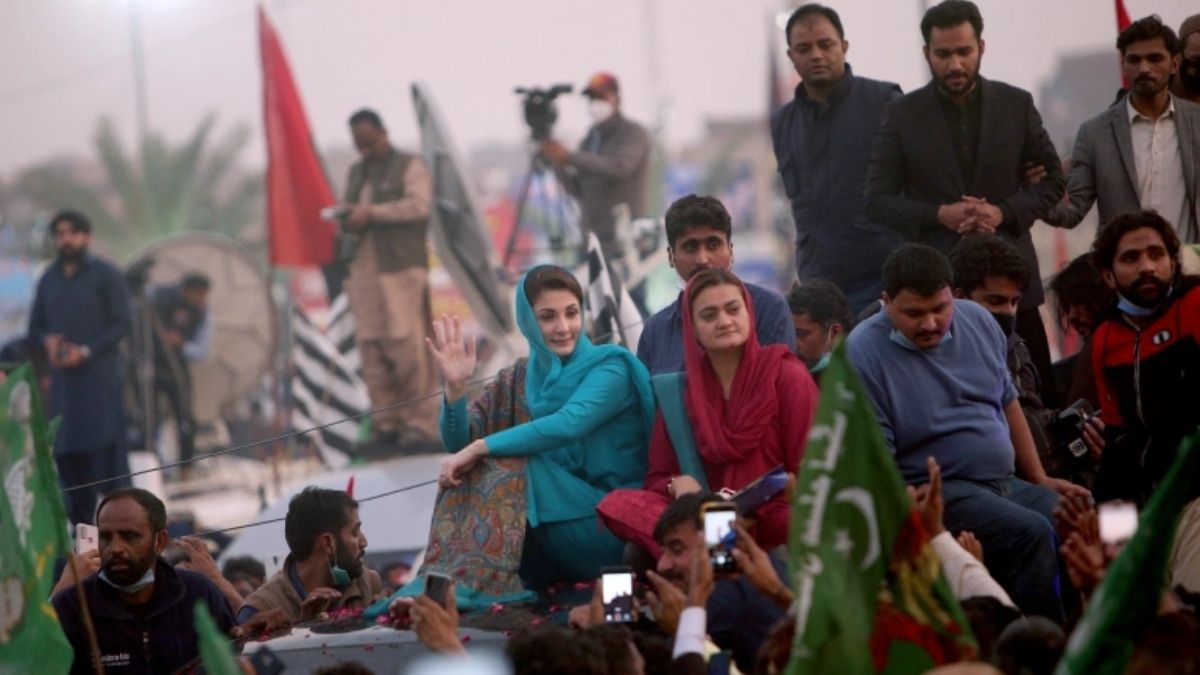 Fighting a raging pandemic, picking up the pieces of an economy in ruins, pacifying his edgy political allies, and staring down an increasingly combative opposition are just some of the challenges on the hands of Prime Minister Imran Khan – whose PTI-led government is yet to reach the halfway mark of its five-year term – and the last mentioned of these may just prove the toughest of them all.

The Pakistan Tehreek-e-Insaf supreme has now conjured the prospect of total lockdown to stop the opposition PDM. Khan holds the politicians and parties that are now part of the Pakistan Democratic Movement responsible for all ills of the country and believes their current political activities threaten to sabotage the nation’s COVID-19 safety.

The Prime Minister has now indicated that the government will be compelled to enforce a total lockdown unless the opposition calls off public gatherings. Arrests in Multan already started.

The opposition, on its part, is equally eager to up the ante. If the speeches made by PDM leaders at Peshawar are anything to go by, the political temperature is up. Perhaps their humiliation in history’s most hotly-contested Gilgit-Baltistan elections was the reason bitterness was their speeches at the public meeting in the PTI’s stronghold on Nov 22.

The prime minister said the PDM would be responsible for the consequences if it continued with public gatherings despite a surge in Covid-19 cases.

The prime minister, who had already canceled his party’s planned public meetings in response to the opposition’s rallies, said by continuing with public gatherings the PDM was deliberately endangering the lives and livelihoods of the people. And now with Bilawal testing positive, the PDM leadership will definitely be under pressure to re-think its strategy. However, the PDM is so far determined to go ahead at least with its Nov 30 Multan rally coinciding with the foundation day celebrations of the PPP, and Bilawal has already announced that he would make the address via a video link.

“Let me make it clear: They can hold a million jalsas but will not get any National Reconciliation Ordinance-like concession,” the premier said, hinting a possible action against the opposition leaders for continuing with their agitation movement.

The PDM leaders call Khan’s government without legal or constitutional basis because it was rigged into power by the country’s top and his spymaster at the Peshawar meeting, they said Khan’s government was more dangerous than coronavirus, and rejected the government moves to ban their activities. They vowed to hold their remaining planned public meetings before a final long march to the capital in January aimed at ousting the government.

The PDM held the Peshawar event defying a ban by the local administration and despite warnings of a possible act of terrorism.

It was perhaps out of frustration after losing the elections in the GB despite running a hectic one-month-long campaign that Pakistan Peoples Party (PPP) Chairman Bilawal Bhutto-Zardari in his speech at the Peshawar Jalsa directly attacked the establishment, almost in the same language that had previously been used by PML-N’s supremo Nawaz Sharif in the previous public meetings.

“Citizens would decide the fate of this country, not those in Pindi or in Aabpara,” declared Bilawal, adding: “We will hold accountable the puppet government and their selectors as well.” The PPP chairman further said corruption could not be rooted out until the law of the land applied equally to “judges, generals and politicians”.

The bitterness in Bilawal’s tone must have surprised many who claim that the PPP was in contact with the establishment for a behind-the-scenes plea bargain settlement. But they can say that such statements are part of putting pressure on the negotiators from another side as did by Nawaz Sharif after exhausting all his backdoor channels.

On the other hand, PDM president Maulana Fazlur Rehman directly asked the establishment to withdraw its support for the “illegitimate and puppet” government and “publicly disown” it. He said the PDM respected the “constitutional role” of the army in securing the border of Pakistan, but “if the military dabbles in politics, it will have to face criticism”.

Earlier, the two BBC interviews of Bilawal and Maryam in Gilgit had exposed fissures within the ranks of the PDM. Despite being part of the opposition alliance, the two parties contested the GB elections against each other, but most of the time their leaders succeeded in restraining themselves from targeting each other during the campaign. Former GB chief minister Hafeezur Rehman during a news conference, however, bursted and alleged that the PPP had utilised all resources of Sindh in the GB elections and at the end, it got nothing.

Giving an interview to the BBC Urdu, Bilawal had said that he was ‘shocked’ when he heard PML-N supremo Nawaz Sharif naming the military leadership in his address at the PDM’s rally in Gujranwala for allegedly orchestrating his ouster from the office.

Bilawal, who always takes the credit for being the inventor of the term “selected prime minister” for Imran Khan, had stated in the same interview that Nawaz Sharif had served three times as prime minister and “if he has said something he must have said that on the basis of evidence”.

A number of government spokespersons and some media analysts were quick in interpreting Bilawal’s interview as a “clear divide” within the two major component parties of the PDM on the issue of anti-establishment narrative.

On the other hand, PML-N Vice-President Maryam Nawaz downplayed the discussion on Bilawal’s remarks about her party’s narrative and said the party had no reservations over it. She said Bilaw- al’s statement was being misinterpreted by those who wanted to create ‘cracks’ within the opposition’s alliance.

The two parties, however, were again seen taking different positions when in a rare move, the Pakistan Army announced removal of officers of the premier Inter-Services Intelligence (ISI) and Pakistan Rangers from their current assignments after finding them acting “overzealously” in the alleged kidnapping of the Sindh police chief in the backdrop of Oct 18 Karachi incident when PML-N’s retired Captain Muhammad Safdar, the spouse of Maryam Nawaz, was picked up from a hotel room on charges of desecration of the Quaid’s mausoleum.

The PPP welcomed the report of the inquiry which took less than three weeks to complete after Army Chief General Qamar Javed Bajwa vowed to look into the matter following complaints from the opposition and police officers’ en masse request for long leave in protest.

Hailing the inquiry, Bilawal termed it a step to “fortify the prestige of institutions”. On the other hand, former Prime Minister Nawaz Sharif REJECTED the report and termed it a “cover-up scapegoating juniors and shielding the real culprits.”

The day after their varying reactions over the army’s inquiry report were aired, Maryam and Bilawal held a one-on-one meeting in Gilgit in an effort to quell misunderstandings between the two parties. The meeting had reportedly taken place at the initiative of Maryam after she got reports that the PPP was unhappy over Nawaz Sharif’s tweet in which he had rejected the inquiry report.

The pair of young politicians demonstrated maturity and decided not to talk on the matter publicly, thus providing no opportunity to their opponents to exploit the situation.

Later, Maryam Nawaz in her interview also with the BBC showed her party’s readiness to hold talks with the army, but with certain conditions, including packing up of the present PTI government.

Commenting on Maryam’s interview, a senior PPP office-bearer reportedly said it seemed that a “rethinking process” was currently underway within the PML-N over its “extreme anti-establishment narrative”. The ruling PTI termed it an effort by Maryam to become relevant by offering an olive branch while hinting that her party was open to dialogue with the army.

Some political analysts, however, are of the view that both Bilawal and Maryam had intentionally avoided taking a tough anti-establishment stance during their stays in Gilgit-Baltistan hoping for a favorable return for their respective parties in the GB polls.

Another significant decision taken collectively by the PDM component parties was to boycott the parliamentary leaders’ meeting which had been convened by National Assembly Speaker Asad Qaiser for “a briefing by military officials on the current issues of national security”.

Reportedly, the main objective of the briefing was to make an effort to develop a national consensus on granting “provisional provincial status” to the strategically-located Gilgit-Baltistan. Although there was no official confirmation from the government or the ISPR, media reports quoting unnamed sources said army leadership was to conduct the briefing.

The PDM decision to boycott the meeting was announced by the alliance’s Information Secretary Mian Iftikhar Hussain through a statement, in which he accused the speaker of being biased and “suppressing the opposition’s voice in the National Assembly”.

This was the second time in six weeks that the speaker had to cancel such a meeting as previously he had to nix a similar meeting which he had convened doe 28 September to discuss the GB elections. ODM even boycotted Speaker’s meeting to discuss the covid 19 threat.

Amid the opposition’s movement against his government, Prime Minister Imran Khan found himself in hot waters when he faced criticism on his government’s economic policies from the allies during a lunch he hosted for the coalition partners. The meeting was not attended by the PML-Q, the PTI’s key ally in Punjab, and PML-Q’s Monis Elahi later in a tweet said his party’s alliance with the PTI was “for the vote and not for lunch”.

During the meeting, the government allies reportedly piled on the prime minister for non-provision of development funds, price hike, missing parsons, and not keeping them in the loop when taking decisions.

Housing Minister Tariq Bashir Cheema later appeared in a TV talk show and said the PML-Q had nothing to show to the people what achievement had so far been made by the government. He said it would become quite difficult for them to further go along the PTI, “if the party does not mend its ways”.

The prime minister assured the allies that he would address all the problems mentioned by them.

With both the government and the opposition taking extreme positions and COVID-19 pandemic returning, small wonder most Pakistanis see testing times ahead as a nation.