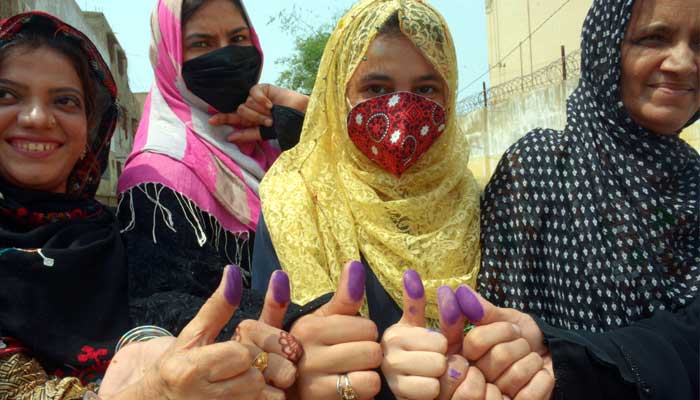 PTI emerged as the biggest winner in cantonment board elections held across Pakistan on Sunday.

According to the preliminary, unofficial results, PTI obtained 63 seats, closely followed by PML-N which won 59.

PTI won the most number of seats in Khyber Pakhtunkhwa — 18 — followed by 28 in Punjab, 14 in Sindh and three in Balochistan.

PML-N won big in Punjab, bagging 51 seats, managing only five in KP, three in Sindh and none in Balochistan.

PPP was surprisingly unable to defeat PTI in Sindh, instead tying with them for 14 seats. The remaining three seats were won in KP, meaning none were won in either Punjab or Balochistan.

Independent candidates scored big in Punjab, bagging 32 seats. They secured nine in KP, seven in Sindh and four in Balochistan.

MQM won all of its 10 seats in Sindh, whereas JI won five in Sindh and two in Punjab.

The polls in numbers

Of the candidates vying for the total 219 wards across 42 cantonment boards, seven candidates were already elected unopposed. Therefore, the race was held for 212 seats.

The polling process started at 8am and continued till 5pm. Voters inside the polling station were able to cast their votes despite polling time ending. The gates were closed for those queued outside.

Even before the counting of votes across all wards was complete, parties began claiming support shown by people and declaring victory.

PTI’s Fawad Chaudhry said that the PTI “proved” it is the “only party” that enjoys support across the country and in every constituency.

“The real contest today was with the independents. Peoples Party and Noon League’s standing has been exposed,” he added.

He went on to state that the real competition was between PTI and those candidates who were unable to obtain a ticket and contested as independents.

“The results show that whatever meagre standing the Opposition had, has been eradicated and they have been sorely defeated,” the minister said.

PML-N spokesperson Marriyum Aurangzeb responded by saying: “The cantonment board elections have proved once again that if the RTS does not fail, these vote robbers cannot win. These thieves who have robbed people of flour, sugar, electricity, gas, medicines, and imposed inflation, unemployment, poverty, incompetence and corruption, the PTI, have been rejected by the people. False tweets cannot change the reality.”

PML-N President Shehbaz Sharif thanked God and the people who had shown the party support through their votes in the polls.

“We assure the people that we will not disappoint them and will leave no stone unturned in resolving their hardships and issues,” he said.

“We will take the country on the path to development, progress and prosperity with renewed vigour. InshaAllah,” he added.

Later, he claimed the party’s victory in all of Ward 10. “Alhamdolillah PPP has emerged as the largest party of CBC so far. Well done PPP workers,” Wahab said.

Later, he claimed the party’s victory in all of Ward 10. “Alhamdolillah PPP has emerged as the largest party of CBC so far. Well done PPP workers,” Wahab said.

Past midnight, he summed up the PPP’s performance in the Clifton Cantonment Board by saying that it emerged as the “single largest party” with four councillors out of 10 wards, “while PTI has shrunk to only two councillors”.

“Jamaat-e-Islami has two, while two independents have also been elected. Its clear that residents of CBC have rejected PTI,” he wrote.

Traditional rivalry between competing parties was witnessed earlier too during Sunday’s polling exercise.

PPP minister Saeed Ghani shared a video of PTI minister Ali Haider Zaidi visiting a polling station in Karachi’s Faisal Cantt, upon which the Election Commission of Pakistan took notice and issued orders for Zaidi’s expulsion from the NA-244 constituency.

Zaidi, in response, challenged the ECP to prove he had visited any polling station other than where he had cast his vote, vowing that he will resign as a minister, and moreover as an MNA if it is proven.

Zaidi’s arrival at a polling station near the National Stadium was met by loud cheers by PTI workers.

In addition, in Korangi, during PTI MNA Faheem Khan and MPA Raja Izhar’s visit, PPP workers staged a protest and demanded that the ECP take notice of the violation of a code of conduct, since party members are not allowed to visit constituencies until after polling ends.

Meanwhile, MQM Pakistan also complained to the ECP. Wasim Akhtar said that the PPP MPAs are “roaming around” in various localities, where they are “acting like goons”.

He alleged that voter numbers had been fudged in several cantonments.

Furthermore, two fake polling agents were arrested from the Clifton cantonment board.

In Lahore’s Ward No 4, clashes occurred between PTI and PML-N workers, who shouted slogans against one another. Moreover, after three days of continuous rains in the city, the polling process was delayed at some polling stations due to accumulated rainwater in different areas.

In Multan, in the remits of one polling station, rivalry between parties extended to physical blows between voters. Polling was temporarily suspended due to clashes that occurred twice.

Malik Azad, the PML-N candidate for the Gujranwala cantonment election, while talking to Geo News, alleged that polling staff was preventing the party’s voters from casting their votes.

Azad said that objections were being raised against our votes without any reason. “When I went inside to complain, I was also stopped,” he said.

Over at Sargodha, two polling stations of Ward No 9 ended up being set up in graveyards.

It did not deter the arrival of voters, however, who continued to cast their votes despite the unusual venue.

ECP officials said that due to a lack of government buildings, tents had to be put up at the graveyard for two polling stations.

Two people were arrested after being accused of preparing fake ballot papers. Computers, printers and fake stamps were recovered from their possession.

Strict security arrangements were made at all the polling booths. The ECP had directed the provincial governments to install cameras at the most sensitive polling stations and said that presiding officers would announce the results at the polling stations after counting ends. All polling agents and candidates were receive a copy of the result from the Presiding Officer.